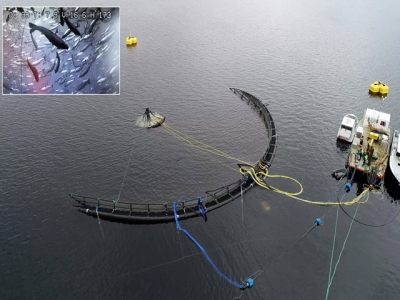 The pen was inspired by Norway’s development licence initiative and has been developed and built by a consortium of companies consisting of Akva, Sinkaberg-Hansen and Egersen Net. It can be lowered in the water column by filling the plastic collar with water, and raised again by replacing the water with air.

The pen took 30 minutes to sink to 25 metres and the fish were able to feed as normal within 24 hours. Photo © Akva

The 160m pen was stocked with 10,000 salmon for two months in order to test it out. The fish were stocked at 3.6 kg having been deloused in May, before being slaughtered in July. The air dome – which grants salmon access to air below the water in order to fill their swim bladders – was sunk to a depth of 22-24m below the surface. The theory being that very few, if any, sea lice or harmful algae are present at such a depth.

The subsea design should also allow it to remain unaffected by more severe weather as it is not exposed to the force of breaking waves.

"Close surveillance of the fish revealed normal behaviour and feeding pattern throughout the whole period. The growth was about the same compared to ordinary pens at the site. The conclusion is that the fish learned to use the air dome in order to fill the swim bladder sufficiently," said Trude Olafsen, who managed the project.

Different methods for netting the fish from the pen were tested in the project.

"We are continuously building competence and experiences with the lice control system," Olafsen said.

The trials took place at Gjerdinga, a site owned by Sinkaberg Hansen in the north of Trøndelag. 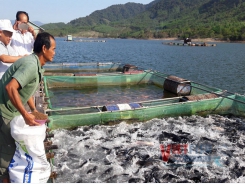 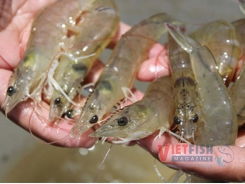