Impact of dust, formaldehyde and delayed feeding after hatch 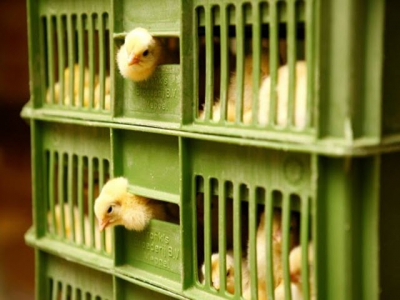 During the hatch window the early birds are exposed up to 36 hours to the hatchers environment. Depending on circumstances dust, formaldehyde and feed deprivation negatively influences the chicks start.

The hatch window of broiler chickens hatch is 24-36 hours. Most chickens are normally pulled from the hatcher simultaneously at approximately 512 h of incubation. The period that chickens stay in a hatcher varies among individual chickens. During that period, chickens are exposed to various challenges: dust, high pathogen loads, formaldehyde treatment and feed and water deprivation.

Dust originates from fluff released from the hatchlings during drying, which breaks down into fine dust. Fine dust consists of particles < 10 µm and is able to enter the body via the lungs and air sacs and settle in all parts of the body.

Heat inactivated fine dust -used to mimic effects of dust in the research- resulted in greater growth rates, suggesting that dust might have a stimulatory effect on immune responses of chickens. Dust is also an important transport mechanism for pathogenic micro-organisms, like bacteria, viruses and fungi.

After hatching, all chickens were assigned to 1 of 2 feeding treatments, early feeding or delayed feeding, and reared for a period of 7 days. Photo: Hans Prinsen

To reduce the spread of these micro-organisms, formaldehyde is often evaporated in the hatcher.

The effects of perinatal exposure to dust or formaldehyde, combined with the moment of first feed and water access, on development of broiler chickens at hatch and during the first week of life were studied.

4 experimental treatments (dust, form) were used from 468 until 512 h of incubation. After hatching, all chickens were assigned to 1 of 2 feeding treatments, early feeding or delayed feeding, and reared for a period of 7 days.

Body weight, and relative organ weight were measured; to measure immunological development a microbicidal capacity test and a monocyte activity test were carried out. Dust and formaldehyde during the hatching phase affect broiler chicken development at pulling from the incubator, however, no effect could be demonstrated during the 7 days rearing period. 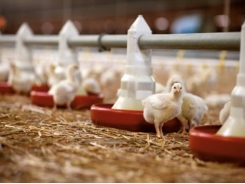 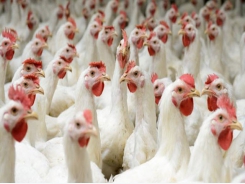 Nuffield Scholar talks of benefits of insects for…