Fungal fermented rye may reduce reliance on antibiotics in pigs

A product, based on proprietary fungal fermented rye, is aimed at supporting pig farmers as they move away from a reliance on antibiotics for herd management in that it reduces the animal’s exposure to harmful pathogens, says Trouw Nutrition.

One of the main components of the product, branded as Fysal Solute, is Agaricus subrufescens,​ a fungi species, also called the ‘sun mushroom’​, which has been cited for its health promoting properties in humans and animals, including anti-carcinogen, immune modulatory, anti-oxidant and prebiotic effects, said the company.

“The product has a prebiotic effect, it stimulates the growth of beneficial bacteria; there is reduced growth of pathogenic bacteria such as Salmonella and E. coli, and also natural defense system modulation, resulting in less fecal excretion of those pathogenic bacterial in the environment,​ and less infection pressure, making the product effective as a preventative tool, an ideal fit for our antibiotic reduction program,” ​said Nienke de Groot, global swine gut health program manager, Trouw Nutrition.

Studies into the fungal fermented rye, branded as Fysal Solute, were presented at the European Symposium of Porcine Health Management (ESPHM) in May this year. The product was launched on the market subsequent to that event.

“The mushrooms are produced in the Netherlands, and are used to inoculate the rye. ​First the rye must be sterilized at the rate of two tons per batch to ensure that there is no mold contamination but also that there is no competition from other microbes during the fermentation process.​

Such active components include beta-glucans, bioactive peptides, prebiotic poly- and oligosaccharides and phenolic compounds, she said.

Having done a competitor analysis, Trouw Nutrition believes it is the only producer using mushrooms to ferment rye.

The product was about six years in development: “It has been a long process. Trouw Nutrition R&D works this way, it does a lot of screening of ingredients and then takes it a step further. So, in the beginning [the researchers] screened the mushroom product and other products in terms of their capability to bind to bacteria along with their ability to stimulate an immune response. Then, after that in vitro work, the Trouw Nutrition R&D team started to do animal trials, which are first done in-house,”​ said de Groot. 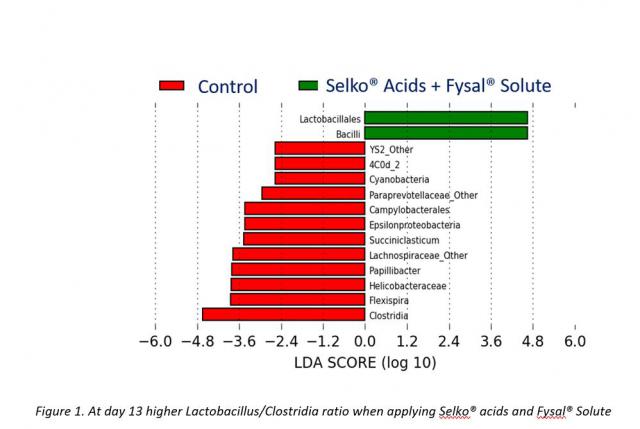 A study conducted on microbial sequencing after a Salmonella challenge shows how the combination of Fysal Solute and organic acids modifies in a positive way the animal’s microbiota, with a higher presence of Lactobacillus and a lower presence of Clostridia, Helicobacter and Cyanobacterium © Trouw Nutrition

“In the Netherlands, we have our own swine research facility, which has a Salmonella challenge model. The team inoculated cookies with Salmonella and gave those to the pigs to avoid stressors like inoculating the animals directly through the mouth. The animals were then individually caged.  As the trial was focused on prevention of fecal excretion​, and with Salmonella easily transmitted to other animals in the pen, caging them meant we could have a controlled environment by which we could determine the effect of the product.​

“In that trial, we could see a reduction in excretion of Salmonella and E. coli, a specific E. coli that was resistant for a certain type of antibiotic. We also saw a microbial shift, more presence of Lactobacillus ​​and less presence of potential pathogenic bacteria.​

“We see that this product can help in enabling the animal to have a more beneficial microbiota.”​

To enhance data around that shift in the microbiota, to reduce the known variability in microbiota research outcomes, de Groot said Trouw Nutrition is continuing to evaluate the product in that respect.

Fysal Solute is focused, ultimately, on reducing infection pressure in the house, through a reduction in Salmonella​ fecal excretion. “That is actually the main mode of action.”​

The product can, thus, also help industry deal with regulatory pressure - financial penalties from control measures in certain EU markets, such as the Netherlands and Germany, result in slaughterhouses in those countries having to monitor for Salmonella ​antibodies, she said.

The product is now included in Trouw Nutrition’s young animal feed range, Milkiwean. It is used in the nursery phase, but the company sees that, from trials, at the end of life, there is a reduction in the number of Salmonella ​antibodies, illustrating how early nutrition can support lifetime swine performance, added de Groot.

The general recommendation is that the product needs be given to piglets directly after weaning up to 16 weeks of age if the Salmonella​ infection pressure is high on a farm, she said. “The German market, due to market regulations in swine production with regards to Salmonella, is extremely enthusiastic about the product. We are carrying out a long-term trial with a customer in that country, of six months duration, to determine the level of reduction of antibodies at the slaughterhouse stage.”  ​

The company has also carried out a trial to see how the use of the product in the diets of nursery pigs may facilitate the natural defense response to vaccination.

Research conducted with an immunologist at Universidad de Murcia in Spain focused on the immune effect in a small-scale trial with weaned piglets under high health status. The team found the natural defense system in animals receiving Fysal Solute was activated but very well regulated, said the company.

“We know that the dendritic cells, which are in contact with the content of the lumen, are triggering a response when they are interacting with some of the ingredients in the product. There is an increase in macrophage activity and the natural killer cells; the product makes sure the natural defense system is quickly responding to pathogens and bacteria. ​​

“On the other hand, what we don’t want is an over stimulation of the pro-inflammatory response; we do see a increased regulatory effect of the defense system,” ​said ​de Groot.

In vitro ​and in vivo ​trials with fungal fermented derived additive ingredients have also shown an effect on cytokine activity during challenge studies, reported Trouw Nutrition. 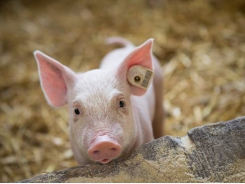 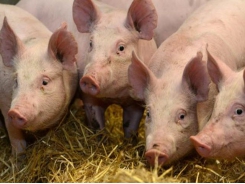 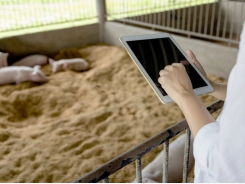 Can we increase the birth weight of piglets…