Which markets will benefit from hike in Chinese demand for poultry? 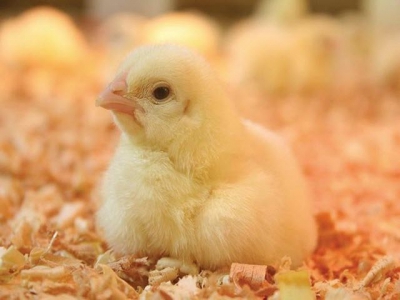 China is seeing exceptionally high poultry prices due to the shift from pork to poultry as a result of the worsening situation with African Swine Fever (ASF), noted Rabobank it its latest poultry quarterly.

The analysts expect the Chinese poultry sector to stay bullish.

Chinese pork production is expected to drop by at least 25% in 2019, said Rabobank. Poultry prices there are predicted to stay high on substitution effects, exacerbated by the reduction in breeding stock and limited trade access for potential exporters, said the poultry market specialists.

“China is very low in grandparent [breeding] stock at the moment. [China had banned the sourcing of grandparent stocks from Europe and the US, due to the threat of AI in those regions, and had relied on New Zealand alone]. Since autumn last year, China has allowed Poland to provide it with grandparent stocks, but it will take some 14 months to build supplies. So this will leave local poultry supply in China tight, the country will need to import chicken products as well,​” Nan-Dirk Mulder, senior global animal protein analyst, Rabobank International's Food and Agribusiness Advisory and Research, told FeedNavigator in March.

This extremely tight market situation in China has, to date, had limited impact on global poultry markets, as China is not especially open to poultry imports. Only a few countries and individual companies with direct access to China and Vietnam, which has seen pig herd culling also due to the ASF outbreak, are set to benefit, noted the Dutch bank.

“Brazil will increase trade, subject to an agreement with China on pricing. Other exporters, like Argentina and Thailand, will also benefit, but potential volumes are limited. The US is prevented from exporting, and given the current US-China trade negotiations; it is difficult to predict when this could change.”​

EU access to China is also limited, with only a few companies in Poland and France able to export.

“The European chicken sector is quite a bit behind the European pork sector in terms of access to the Chinese market. They can only benefit from this situation through shipping to China via Hong Kong, the traditional route. Hong Kong then re-exports the products to China,”​ said Mulder previously.

Poland, the lowest cost chicken producer, is probably best placed currently to leverage this protein shortage in China, he said, as it has the biggest number of plants permitted to export to the Asian behemoth, and has been supplying the breeding stock to China also.

The Polish poultry industry has placed a huge emphasis on China, he said back then. “There is a lot more supply from Poland and they need outlets, China is certainly one of them.”​

A relevant development though is the recent opening of Russia for exports to China, added Rabobank.

“This is a noteworthy sign of Russia’s production growth, but is still relatively small in global terms. We don’t see export volumes to mainland China moving above 600,000 metric tons this year, even in a best case scenario.”

The global poultry market has been on a rollercoaster ride in the past year, with a large oversupply in 2H 2018 and early 2019 greatly affecting prices for globally-traded poultry products, according to the publication.

“The balance in the market is gradually returning, driven by stronger dark meat demand from Asia and Africa. Having said this, global trade volumes in Q1 2019 were just 2.8m metric tons, and at their lowest level since 2015, indicating tough ongoing issues in poultry trade.”​

Rabobank sees that market conditions have slightly improved for Brazil, India and Thailand, while markets like the EU, US, Mexico and Japan are recovering but remain fragile.

The worst performing industries are currently South Africa, Russia and Indonesia, which all struggle with oversupply.

“Feed cost is currently an issue, especially for corn from North America, given uncertainty over production levels. This could be offset by softening soybean prices as well as better grain supply in Europe and Southeast Asia.” 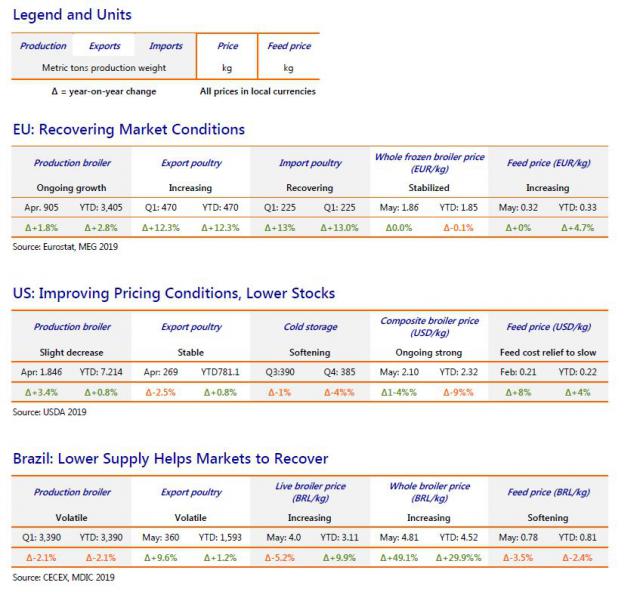 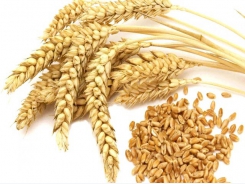 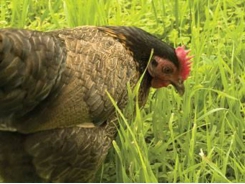 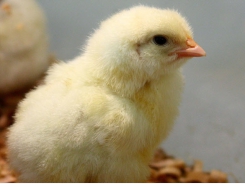