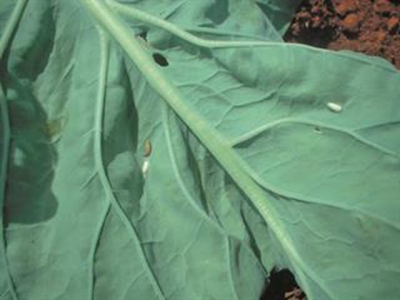 My interest in integrated pest management (IPM) was sparked many years ago when carrying out brassica trials.

The trials were already complete at that stage, so I told my son to use the produce to feed his rabbits and guinea pigs – and to do it soon, as diamondback moths (Plutella xylostella) had gained a foothold on the land.

Occupied with other things, I neglected to check up on the crop. When I did, I found the caterpillars had all but gone and a number of minute Cortesia wasps were ‘scanning’ the leaves. I also noticed small, brilliant-white cocoons on the leaves. These were very different to the longer, greenish cocoons of the diamondback. As I watched, I saw the larvae of the parasitic wasp start to spin their cocoons after emerging from a diamondback larva.

I decided to leave things as they were for a while longer. The result was that the parasitic wasps – or more correctly, parasitoids – despatched every caterpillar on the crop. Moreover, there was no need to spray during the next trial, which was already on the go; the parasitoids kept it worm-free.

In 20 years, I have had to spray for caterpillars on only one occasion – after a particularly harsh winter that drastically reduced the parasitoid activity and allowed the moths to thrive. I used a selective product that reduced the diamondbacks and gave the parasitoids a chance to build up again.

Because I grow brassicas continually, parasitoids are always present, and a natural cycle develops: the brassicas attract P. xylostella onto the land and this allows the parasitoids to reproduce and control the pest.

When I have to spray for aphids, I use Pirimicarb, which is safe for parasitoids. Sadly, few commercial brassica farmers are aware of the parasitoids. The first thing to look out for are the white cocoons on the leaves, a sign that the wasps are present. If their numbers are insufficient to fully control the pest, spray with a selective insecticide to stop the damage until the parasitoid population grows big enough to take over the pest control.

This can happen surprisingly quickly. If lands are planted far apart, it may take a while for the wasps to move across, but they will. You will soon get a ‘feel’ for what to do once you’ve learnt to measure the wasp numbers against the caterpillar population.

When the plants are well- established, a little damage can be tolerated while the parasitoids are building up their numbers. However, if P. xylostella strikes while the plants are very young, you will need to use a selective insecticide immediately. A few nibbles on young leaves will grow out to be large gaps and affect the yield.

A final note. Oil radish, often planted as a trap crop for cyst eelworm control, is also a host to diamondback moths. This can be good or bad. Although it can boost moth populations, it can allow the parasitoids to build up and move over to the brassicas. 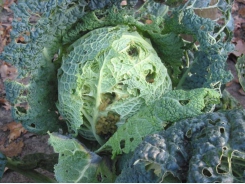 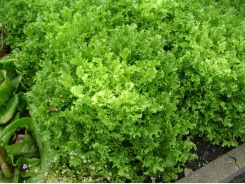 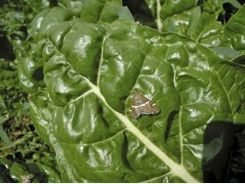 The benefits of holistic pest control