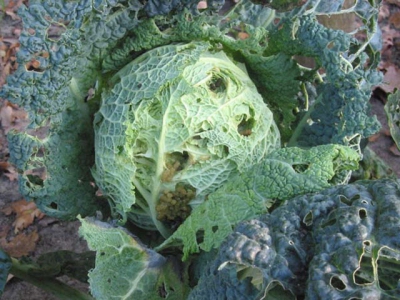 A good example of the effects of j-rooting. When this plant was transplanted, the tap root was bent sideways instead of being placed vertically. This caused stunting.

Cabbages, like all other plants, are prone to both. Because physiological conditions may occur only occasionally, though, they can confuse cabbage growers who have not seen them before.

The cabbage head is made up of tightly compacted leaves. With tip burn, the odd leaf within the head, or part of a leaf, turns brown. Farmers unfamiliar with the term ‘tip burn’ may think that this refers to the browning of the leaf tips from black rot. One could market these cabbages oblivious of the condition until there are complaints from customers.

I came across tip burn occasionally when farming in Mpumulanga many years ago, but have not seen it for some time. More recently, I evaluated an experimental cabbage variety for a breeding company and found it to perform well. But the company told me that it did not want to produce the variety because it was not resistant to tip burn.

My response was that most of our leading varieties are not resistant. The company re-considered its decision and the variety went on to become popular around the world. Susceptibility to this condition differs from variety to variety. Tip burn is related to calcium, and perhaps also boron, deficiency. The calcium level need not be all that low, but if the cabbage is over- stimulated with nitrogen and potash, its calcium uptake is hampered.

Calcium is one of four elements that affect one another. The others are magnesium, potassium and sodium. A soil analysis may show an adequate level of calcium, but heavy application of potassium later on will reduce the proportion of calcium in the soil solution, which may cause tip burn. Sodium in the irrigation water – and hence an increase in the sodium level in the soil – can also cause tip burn.

Farmers often bring this condition to my attention. The leaves – usually the outer ones – appear sandblasted. Spots are visible on the upper side of the leaves and small ‘blisters’ can be seen on the underside. Farmers who have never encountered this problem often think that a strange disease is attacking the crop.

The fact that oedema usually affects the entire planting contributes to the anxiety, as they think the whole crop is at risk. But a closer look will show that there is no sign of dead tissue or other symptoms of disease. Oedema is caused by a sudden drop in temperature when the soil is saturated.

This increases the sap pressure in the leaves, causing the cells to rupture and creating the rough, sand-blasted effect.

Fortunately, no real damage is done. It is usually a once-off occurrence that is more of a curiosity than a condition which can cause yield loss.

This is caused by poor transplanting practices, when seedlings are pushed into the soil in such a way that the roots are not vertical, but bent to one side. This has a greater effect on growth than you would think. A month or so later the plants will be stunted and usually unmarketable.

At the very least, they will be smaller than those grown from seedlings transplanted correctly. Some farmers become so annoyed with this problem they switch to mechanical transplanting. Frost damage I am often shown leaves where the epidermis or skin on the underside of the leaf becomes separated from the rest of the leaf.

This creates a gap between the epidermis and the cells within the leaf. Looking down from above, you will also see some wrinkling of the leaf. This is caused by frost damage. It often occurs when a sudden early frost arrives at a stage that the plants are still tender.

Frost damage can manifest in various other symptoms, including scorching of the leaves, which makes the cause quite obvious. 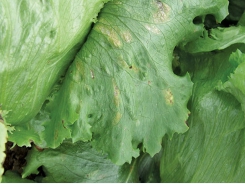 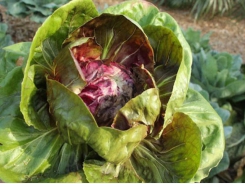 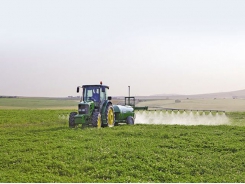