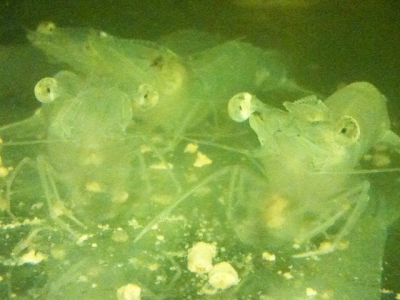 Soybeans are the most widely used plant protein ingredient in aquafeeds

In research that evaluated the ability of DDGS to partially replace SBM as the primary protein source in diets for juvenile white shrimp, feed pellet stability may have been an issue.

Global aquaculture production of shrimp has grown dramatically within the last two decades. Future growth and profitability within the shrimp aquaculture sector will be dependent upon continued improvements in diet efficiency and formulation that include a reduction in the inclusion of expensive marine protein sources in shrimp diets.

Among plant-protein ingredients, soybean meal (SBM) has received the most attention and is the most widely used plant protein ingredient in aquaculture diets due to its wide availability, nutritional consistency, balanced amino acid profile and high digestibility. Although SBM has several positive attributes that make it a good candidate ingredient for replacement of fishmeal in diets, it also has negative attributes that can limit its use at high percentages of inclusion.

A potential candidate ingredient for use in combination with SBM is distillers dried grains with solubles (DDGS), a co-product of ethanol fuel production and the beverage-distilling industry. Ethanol production in the United States has undergone significant expansion within the last 10 years, and DDGS could be used as a protein source for shrimp due to its nutrient content, relatively low cost per unit protein, lack of anti-nutritional factors found in other plant-based ingredients and increasing availability.

A study by the authors evaluated the ability of DDGS to partially replace SBM as the primary protein source in diets for juvenile Pacific white shrimp, Litopenaeus vannamei, grown in a clearwater system.

Diet 1, the control, was similar to a commercial diet with 20.0 percent fishmeal and 24.5 percent soybean meal. Diet 2 completely replaced the fishmeal with SBM (52.5 percent). Diets 3, 4 and 5 evaluated partial replacement of SBM with DDGS at inclusion rates of 10, 20 and 30 percent, respectively.

Supplemental L-lysine and methionine were included in diets 2 through 5 to meet the essential amino acid profile (on a digestible amino acid basis) of the control diet (Table 1). The nutrient composition of the experimental diets is shown in Table 2.

Water quality parameters observed in the experimental system for the duration of the feeding trial were optimal for the growth and survival of white shrimp. At the conclusion of the 56-day feeding trial, the final weight and weight gain of shrimp fed the control diet were significantly higher (P < 0.05) than those for shrimp fed diets containing DDGS as partial replacement of SBM. However, these parameters were not significantly different from the values measured for shrimp fed diet 2 without fishmeal (Table 3).

There has been limited success in totally replacing fishmeal in shrimp diets depending upon the nutrient quality and composition of the substitute ingredients, diet formulation and culture system utilized. Further, several feeding trials conducted under varying experimental and production conditions have shown that SBM used in association with terrestrial plant and/or animal protein sources can be used to partially or totally replace fishmeal as the primary protein source in shrimp diets without adverse effects on growth performance or survival.

The use of two or more complementary protein sources is more appropriate as a strategy to replace fishmeal in practical diets than using a single source of protein. This approach could compensate for possible nutrient deficiencies of the single ingredient, increase cost effectiveness, reduce the effects of anti-nutritional factors, increase palatability and increase the pellet stability of diets without fishmeal.

In the study, use of DDGS in partial replacement of SBM resulted in reduced growth, but the final weights and weight gains of shrimp fed all diets containing DDGS were similar to those for shrimp fed a diet containing SBM as the major protein source.

The reasons for the reduced growth in shrimp fed increasing levels of DDGS were not readily apparent. All diets were formulated to contain similar levels of digestible protein, and essential amino acids met the nutrient requirements for white shrimp. Shrimp fed diet 1 had growth rates comparable to or higher than animals in previous studies. The palatability of all diets appeared high, as upon feeding, shrimp actively and rapidly swam to the pellets and began to consume them.

One possibility could be pellet stability. While data may indicate to the contrary, it seemed that all diets containing DDGS rapidly disintegrated when shrimp began to manipulate and consume the pellets.

A second possible reason for reduced growth could be DDGS quality. The nutrient composition and nutritional quality of DDGS varies among sources. The corn DDGS used in the study was from a distillery, which may have had lower nutrient digestibility than DDGS from another source. 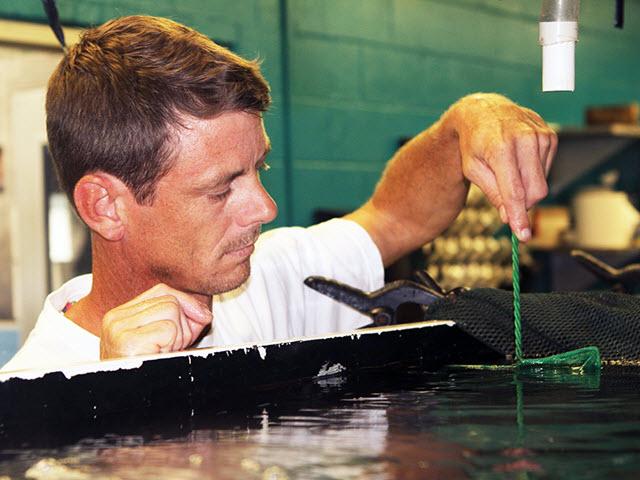 A predetermined feeding regime was used in the study, so it was not possible to make comparisons of diet intake among treatments.

It has been reported that shrimp diet intake has an inverse relationship as fishmeal is replaced by plant protein sources. In this study, a predetermined feeding regime was used, so it was not possible to make comparisons of diet intake among treatments. It was shown that FCRs increased in all DDGS dietary treatments compared to that for the diet with fishmeal, which was probably due to overfeeding because of the reduced final weights of shrimp fed diets 2 through 5.

The percentages initially established were too high, as evidenced by the higher FCR values of shrimp compared to those in other published reports, but the calculated feeding percentages were reasonable. The present study was conducted in a closed, recirculating system, where there was no possibility of exogenous nutrients. When compared to studies conducted in clearwater systems, FCR values in the present study were similar.

While the average survival in the study was lower than the percentages in other reports, several of those studies used greenwater culture systems in which there was continuous access to supplemental nutrients. Survival in the present study was similar to other studies that used clear-water systems.

Based on the results achieved under the conditions and diets of the present study, it can be concluded that partial replacement of SBM with DDGS is not recommended until further refinement of diet formulations determines the reason for the reduced growth observed. Further studies on diet stability, binder use and type, and DDGS particle size, and their impacts on shrimp growth should be conducted to improve the development of economical, sustainable diets for shrimp.

(Editor’s Note: This article was originally published in the March/April 2015 print edition of the Global Aquaculture Advocate.) 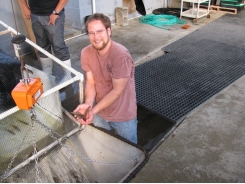 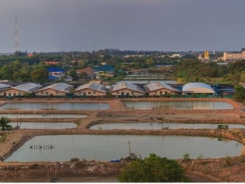 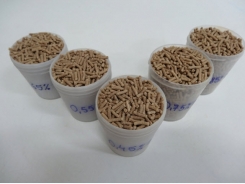