Realising the unmet potential of farming tilapia in saltwater 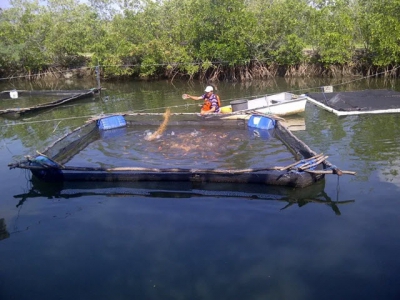 Producing tilapia in marine environments offers a number of advantages over traditional freshwater farming of these fish – saltwater is more readily available in most countries, escaped fish are less likely to become invasive, and tilapia produced in saline water are known for their excellent flavour.

Tilapia aquaculture has been around for a long time. Although the Nile tilapia (Oreochromis niloticus) and synthetic lines derived from its hybrid with the blue tilapia (O. aureus) currently dominate global production, a number of other, closely related species have been evaluated for culture over the past century. Some of these, including O. mossambicus, O. urolepis hornorum (the Wami tilapia) and O. spilurus can tolerate, and even grow in, high levels of salinity. The possibility of producing these fish in saltwater environments continues to capture the imagination of many fish culturists – especially those who have had the good fortune to taste tilapia grown in the sea.

Globally, a surprisingly large portion of tilapia production is attributed to brackish and marine environments. According to FAO statistics, saltwater production has ranged between 7 and 18 percent of annual harvests over the past three decades. Much of this can be attributed to small-scale producers in coastal regions throughout Asia and the Americas, raising Mozambique tilapia or red strains. However, in regions where shrimp producers have access to both processing facilities and export markets, when prices drop or disease problems increase it is not uncommon for ponds to be temporarily converted to low-salinity tilapia production and then converted back when conditions improve. A recent occurrence was in Ecuador - after a boost in 2015, the Ecuadoran firm Industrial Pesquera Santa Priscila saw its tilapia sales decrease by 25 percent in 2016, due to pond operations shifting back to shrimp production in response to market conditions.

Unfortunately, salt tolerant tilapia species generally don’t grow very fast. Or very large, either. And faster growing species like Nile tilapia tend not to be very salt tolerant. However, Mother Nature has given us everything we need to produce salt tolerant varieties – we just have to mix and match the appropriate traits from different species. Fortunately, many tilapia species are quite cooperative when it come to this sort of thing.

In many instances salinity tolerance approaches that of O. mossambicus while growth approximates that of O. niloticus in the first generation hybrid.

Although it grows slowly, has a dismal fillet yield and rarely even reaches sizes that would allow for filleting, the Mozambique tilapia (O. mossambicus) was widely introduced in many developing nations during the last century. And, over the years, researchers in many countries – including Mexico, the Philippines, Malaysia, China and Taiwan – have evaluated the performance of hybrids between Mozambique and Nile tilapia, with fairly consistent results. In many instances salinity tolerance approaches that of O. mossambicus while growth approximates that of O. niloticus in the first generation hybrid.

But in the long term, crossing the same two lines over and over whenever you need fry is tedious at best, and further combining the best aspects of each line is not possible. As explained in a previous column, the next step in plant and animal breeding is often to form a base population from first generation hybrids and then use selection (over a number of generations) to improve the characteristics of importance – in this case, growth and salinity tolerance.

Over the past decade, this is exactly what a group of researchers has been doing in the Philippines. Their goal was to develop a synthetic variety of tilapia (to be called “Molobicus”) that would combine the salinity tolerance of Mozambique tilapia with the superior growth of Nile tilapia. Both species were well established in the country before the project began in 1999, and tens of thousands of hectares of brackish coastal ponds were underutilised at the time. 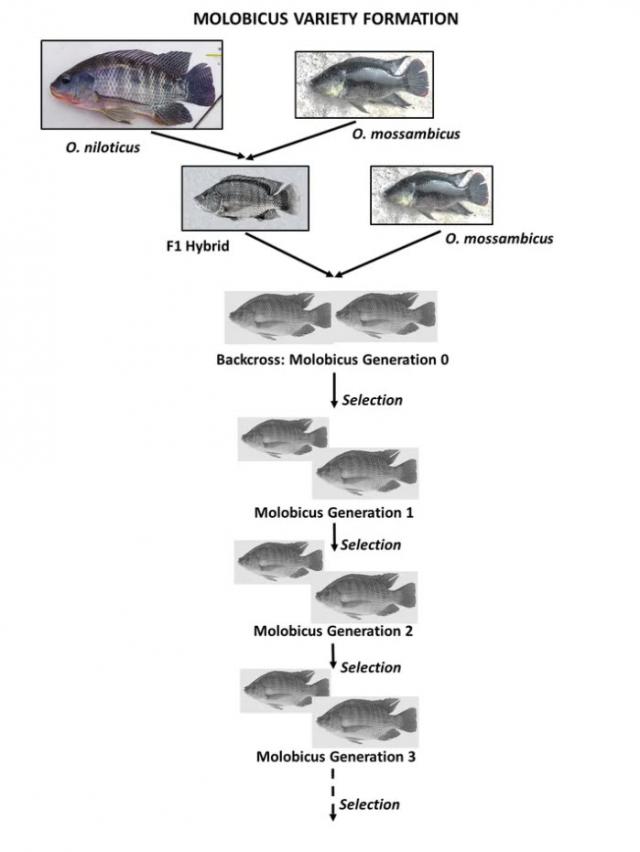 How the Molobicus strain of tilapia was produced in the Philippines

Researchers in the team represented a number of organisations, including the Philippine Council for Aquatic and Marine Research and Development as well as the National Integrated Fisheries Technology Development Center (NIFTDC), an agency of the Bureau of Fisheries and Aquacultural Resources. Several French researchers also participated, representing the Centre de Cooperation Internationale en Recherche Agronomique pour le Developpement and the Institut National de la Recherche Agronomique.

The initial phase of the Molobicus project involved crossing feral Mozambique tilapia (introduced and established in coastal waters decades earlier) with an improved strain of Nile tilapia. The resulting hybrids were then backcrossed with other Mozambique fish from the feral population, in order to produce fish that were roughly ¾ Mozambique and ¼ Nile. This was considered necessary to ensure high levels of salinity tolerance.

An inherent reluctance by Nile tilapia females to mate with Mozambique males was overcome through the use of artificial fertilisation (although O. mossambicus females required no such assistance). After one generation of backcrossing, the resultant fish exhibited salinity tolerance comparable to that of pure Mozambique fish, while their growth to 120 days in brackish water was slightly less than (but not significantly different from) that of Nile tilapia. In all crosses, female Mozambique tilapia exerted a strong, positive maternal influence on salinity tolerance.

A number of backcross families were created and used as the foundation for a selection programme to improve both salinity tolerance and growth over a number of generations. Selection took place separately in low-input brackish ponds (average salinity: 15 ppt) and intensive tank systems (22 ppt). Although body weight at 5 months age increased by roughly 6.7 percent per generation in the pond environment after 5 generations, fish exhibited gains of 10.6 percent per generation over the same time period under intensive culture conditions. Survival under saline conditions also increased with each generation, reaching 82 percent and 84 percent by the fourth generation of selection.

Subsequent molecular analysis of seventh generation fish showed that the make-up of the Molobicus line had shifted significantly in favour of Nile tilapia genes as a result of selection, although the same selection programme ensured the fish conserved their salinity tolerance. In 2017, the programme stated it produced more than a million fingerlings that were sold at 35 centavos per piece (roughly $0.01 USD). More recently, five pilot areas in the Pangasinan region were chosen in 2020 for introduction of Molobicus, according to NIFTDC researcher Nerafe Muyalde. She told the Philippine News Agency that individual fish farmers from each pilot area were chosen as cooperators, based on criteria including their facilities, capabilities, experience and source of water. The selection programme is now on its 11th generation, and there is widespread optimism that these fish will provide a profitable alternative for coastal aquaculture throughout the country and beyond.

Development of salt tolerant tilapia has also been successful in other locations over the years. One example took place in Honduras some years back. Three distinct hybrid-based lines were created in an effort to develop saline tilapia for grow-out in cages in shrimp farm canals. One twist, however, was the fact that local consumers demanded red coloured fish, unlike the Molobicus strain. 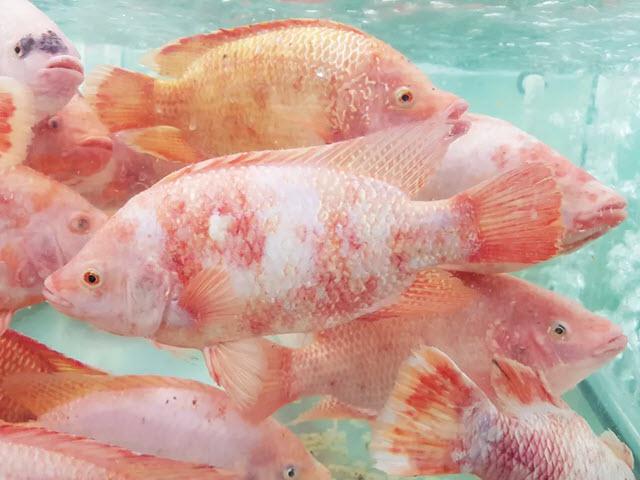 Some background on “red” tilapia is in order here. A simple recessive mutation that imparts a brilliant orange colour occurs from time to time in pure lines of Mozambique tilapia. In Taiwan some of these “red” O. mossambicus were collected in 1968 and subsequently crossed with local strains of O. niloticus, providing the founding hybrid-based population for what would later be known as the Taiwan Red variety. In the late 1970s efforts in the US to spawn “red” Mozambique tilapia with Wami tilapia gave rise to hybrid fish that, when crossed among themselves, would ultimately be commercialised as Florida Red Tilapia. Over time, both these hybrid-based lines have been crossed with other species and varieties in various locales, to the point that today an unknown number of distinct red tilapia lines exist. Many of these lines are moderately or highly salt tolerant, but few actually grow very well in salt water.

Lines for the Honduras project were delineated “SeaFarms” (based on a Jamaican Red tilapia x feral O. mossambicus cross), “Toyofuku” (based on a red Mozambique x Red Stirling Nile hybrid) and “San Bernardo” (developed from feral O. mossambicus, Jamaican Red and O. aureus). The Jamaican red tilapia line used in these crosses was descended from Florida Red fish with some additional contributions from Nile and blue tilapia, and had been imported directly from Jamaica. The feral (grey coloured) Mozambique tilapia had been introduced in the Gulf of Fonseca during the mid-1950s. These O. mossambicus exhibited growth patterns far superior to those found throughout Asia, with males typically reaching 700 g and females exceeding 400 g.

Each base population was subjected to selection for growth and survival in the farm environment, body conformation (to counter the large heads, snouts and lips of the feral Mozambique fish) and eventually uniform red colouration. In the early generations of the project, fry were produced in fresh water and gradually acclimated to increasing salinity levels. After 4 years of selection, fish were developed that could reproduce at 20 ppt salinity, grow as much as 6 to 7 g/day in 35 ppt salinity (depending on size and age), and tolerate salinities in excess of 53 ppt. Most fish continued growing at 2 to 4 grams per day, even when salinities reached 50 ppt. Survival in cages was typically 75 percent to 95 percent during grow-out.

In 2018, researchers at Zamorano University evaluated saltwater nursery phase performance of fry from the 7th generation of each population. They reported that in 30 ppt salinity, fry (0.45 g average weight) attained average sizes ranging from 121 to 132 g in 113 days, with survival averaging 83 percent. At this size, these fish would typically be stocked into cages for grow-out at 10 kg per cubic metre, and harvested at 50 kg per cubic metre 120 days later, at an average size of 650 g.

Concerns over unintentional establishment of invasive tilapia are well documented in freshwater habitats throughout the world. Similar concerns have been expressed with regard to tilapia in saltwater environments, but long-established estuarine populations of tilapia seem to result in minimal ecological disruptions when compared to expansions seen in freshwater. And although introduced tilapia populations can be found in tropical and subtropical estuaries and other brackish coastal environments throughout the world, they are largely unreported from open seawater.

Sperm activation (and subsequent egg fertilisation) in tilapia requires an osmotic gradient, which may preclude spawning in seawater for all but the most salt tolerant species (O. spilurus, O. mossambicus and O. urolepis hornorum) and hybrids. Susceptibility to parasites, pathogens and predators typically found in marine habitats may also serve to prevent invasive behaviour when tilapia are introduced to seawater environments. Based on prior research and anecdotal accounts, in the event of inadvertent escape or introduction, red varieties would be even more susceptible to predation in most marine environments. 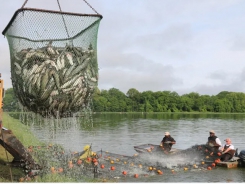 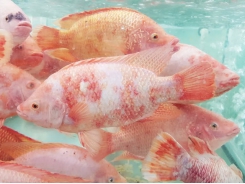 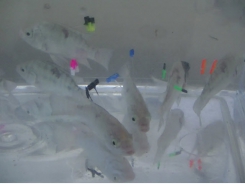 The pros and cons of tagging farmed fish