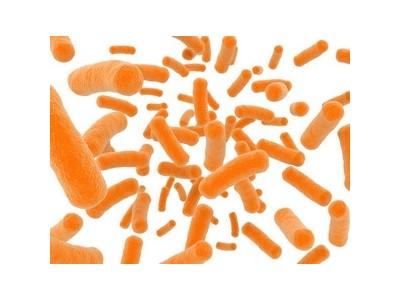 Early mortality syndrome (EMS) is a result of poor management practices in shrimp farming in Vietnam and several other countries. Here a combination of adverse factors in nutrition, biosecurity, host physiology, and especially microbial management leads to a situation where opportunistic pathogens such as Vibrio parahaemolyticus can bloom and dominate the microbiota around and inside the shrimp. When additional virulence factors such as colonisation of the stomach and toxin production are added to this setting, diseases such as acute hepatopancreas necrosis (AHNPD) will cause severe losses.

For more than a decade, INVE Aquaculture has been working on the treatment of ‘traditional’ vibriosis. Hence it was a logical step to extrapolate our established pro- and metaphylactic treatments to this new variant of Vibrio. When applying Sanolife PRO-2 probiotics in the field, as part of a holistic intervention protocol, a significant amount of empirical data of the beneficial action of Bacillus probiotics during shrimp culture has been collected (Lavens et al. 2014). In this study, we measured the effects of Sanolife probiotics in a standardised AHPND challenge model under controlled laboratory conditions.

Post larvae Penaeus vannamei were bred and nursed at the shrimp hatchery and nursery of the College of Aquaculture and Fisheries, Can Tho University. Shrimp stocks were under surveillance for white spot syndrome virus (WSSV) (Lo et al., 1996), yellow head virus (YHV) (IQ2000 YHV/GAV) and AHPND Vibrio (Sirikharin et al. 2014) in order to maintain the specific pathogen free (SPF) status of the post larvae.

For this study, post larvae (PL 20-25), with an average body weight of 1 g were used. This is within the age and size range of shrimp most affected by EMS/AHPND under culture conditions.

Natural seawater which was sterilised and diluted to 25 g/L (a typical salinity for P. vannamei grow-out) was used throughout the experiments.

The bacterial strain used in this study was designated as LTS14. This strain was originally isolated from shrimp diagnosed histopathologically with AHPND in Vietnam in May 2014 and stored at -80 °C in TSB supplemented with 1.5% NaCl and 25% glycerol. The bacteria were identified as V. parahaemolyticus, by green colonies on TCBS, conventional API 20E biochemical tests and PCR with LTH primers (Kaysner and DePaola, 2004).

Additionally, the isolate was positive on PCR with AP3 primers (Sirikharin et al. 2014). Prior to the study, virulence of LTS14 was extensively evaluated by in vivo challenges and compared to other strains. The challenge dose was fine-tuned in order to obtain a reproducible sub-acute LD50-60 mortality curve (Figure 1).

Bacterial cultures were grown for 24 h in TSB supplemented with 1.5% NaCl at 28 °C. Based on the standard curve determined for the strain, the bacterial suspension was diluted in sea water to an optical density corresponding to 108 cells/mL. Shrimp were immersed for 15 minutes in this bacterial culture with continuous aeration. Both bacterial solution and shrimp were then transferred to aquaria containing sea water, and the bacterial concentrations were reduced to 105, 2x105, 106, 2x106 cells/mL. No water was exchanged until 2 days after the challenge, from which point onwards 20% of water was renewed daily. 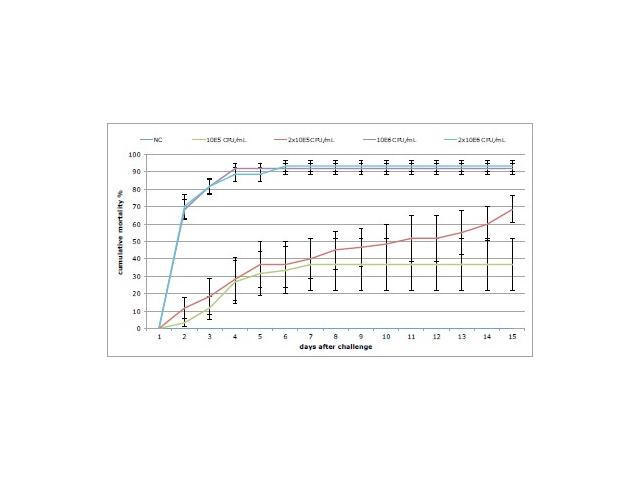 Figure 1. Cumulative mortality curves of the in vivo titration of V. parahaemolyticus LTS14. Each dose was administered to six replicate tanks with 10 shrimp. Based on this experiment, the dose of 2x105 CFU/mL was selected for further challenges, due to its sub-acute course.

Experimental shrimp were stocked at a density of 30 individuals per aquarium with 30 L of water, continuous aeration was provided and water parameters were held constant at 29±1 °C, pH 7.7±2, NH3 <0.1 mg/L and DO 4 mg/L by daily water exchange.

There were five treatments as shown in Table 1. Each treatment was replicated three times. 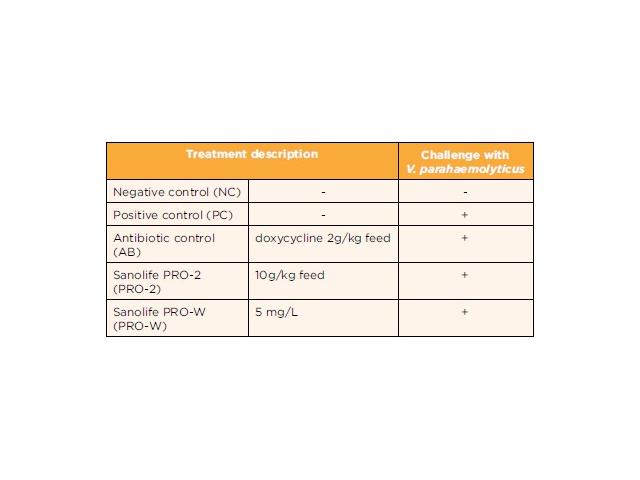 The evaluation of the treatments was based on statistical comparison of the following:

Clinical signs such as anorexia, lethargy and pale colouration of the body and hepatopancreas were observed in 75% of the animals in the positive control group as early as 24 h after the challenge. The incidence of anorexia was less pronounced in the AB and PRO-W treatments and was observed only in 25 to 50% of animals in these groups. Less than 20% of shrimp in the PRO-2 group were recorded with AHPND symptoms, and with a significant delay of 72 h after challenge. Representative potos of gross signs are shown in Figure 2. 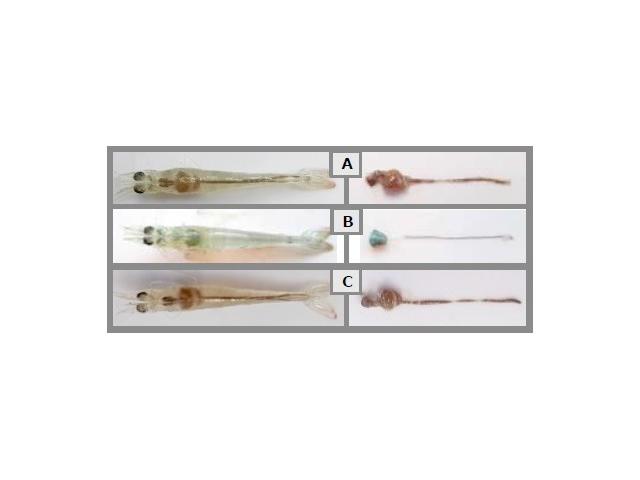 Figure 2. Gross signs 48 h after challenge with 2x105 CFU/mL V. parahaemolyticus LTS14. (A) negative control (NC) shrimp, (B) positive control (PC) shrimp, (C) PRO-2 shrimp. Gross signs of AHPND: absence of feed in gut, pale discolouration and atrophy of the hepatopancreas can be clearly noted in the PC shrimp. Disease signs were delayed and attenuated in the PRO-2 treatment group. 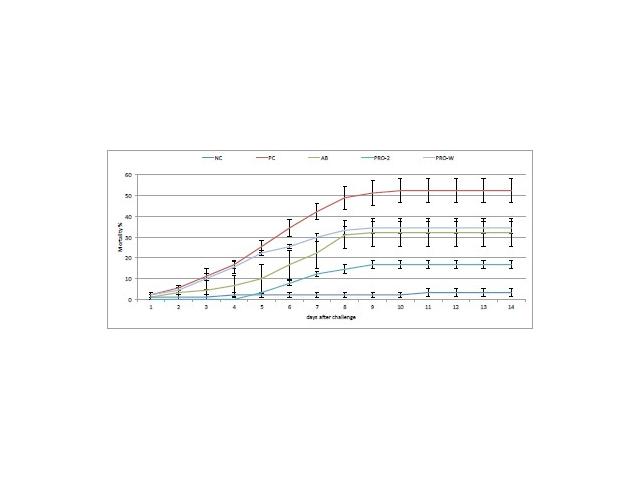 Representative images of histopathological analysis of shrimp in the different treatments are described in figure 4. 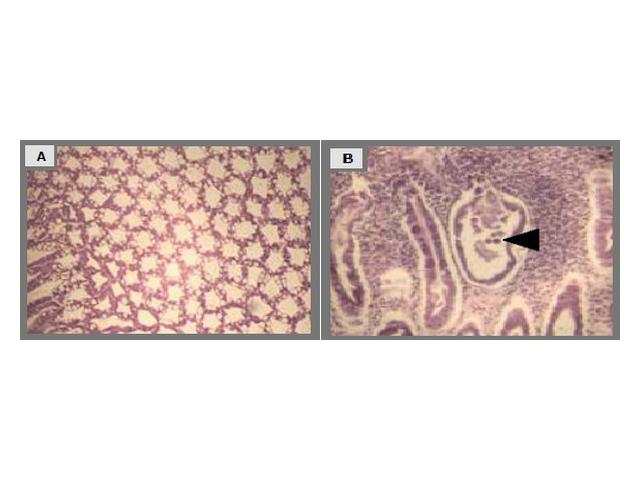 (C) Positive control (10 dpi): severe haemocytic infiltration around hepatopancreas tubuli, sloughing of cells out of the hepatopancreas into the stomach combined with loss of cell types (B-, F- and R-cells). 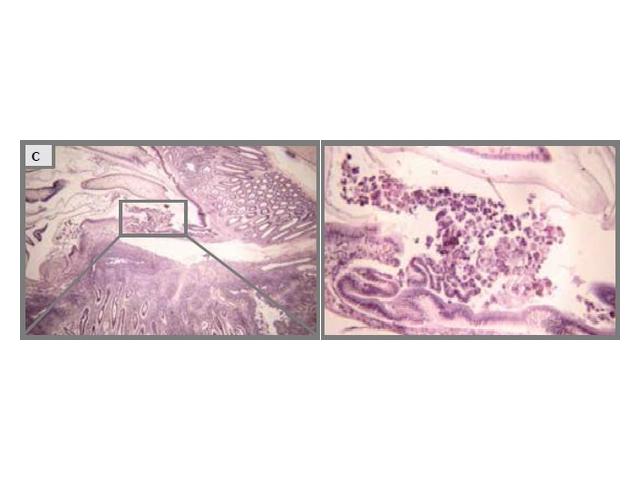 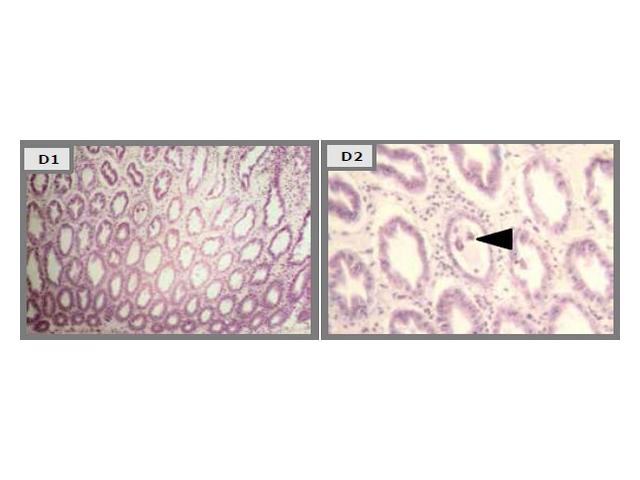 The AHPND challenge model developed and standardised for this study resulted in a mortality curve of the positive control group which reaches its maximum after several days, but does not wipe out all the inoculated shrimp. This pattern of mortality is more in line with AHPND outbreaks observed in shrimp farms. It also offers a better chance for evaluating therapeutic interventions than many reported challenge models employing extremely high bacterial concentrations and hyperacute mortality.

The results of this laboratory study show that Sanolife PRO-2 and Sanolife PRO-W probiotics treatments by themselves have beneficial effects, such as higher survival and histological signs of hepatopancreas regeneration. However, similar to antibiotic treatments, probiotic treatments on their own are not sufficient to completely protect shrimp from diseases. For this, a holistic approach (Corteel and Decamp, 2014) which includes supporting and correcting the rearing system and shrimps health status at all levels during the production cycle is needed.

2. Dang Thi Hoang Oanh is Head of the Department of Aquatic Pathology, College of Aquaculture and Fisheries, Can Tho University, Vietnam. 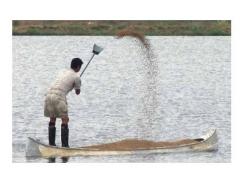 A Case Study on Feed Management to Improving Production 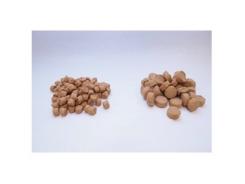 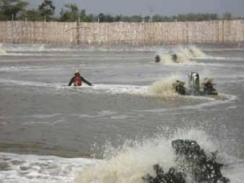 Successful production in semi-biofloc in Indonesia