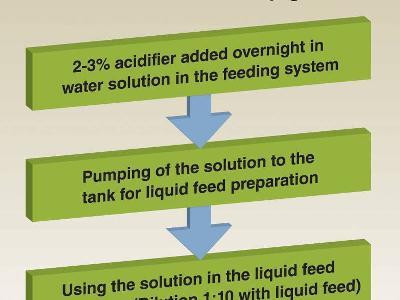 Microbiological control of raw materials and finished feed with the right use of acids is an essential step towards controlling feed quality.

Liquid feeding has many advantages, but paying attention to hygiene is the key to unlocking its full potential.

Sows, weaner, grower and fattening pigs can all be fed liquid feed without problems. Liquid feeding has advantages in terms of flexibility and ease of feeding, while allowing for the use of inexpensive products from the food and alcohol industry.

Positive effects are seen in improved feed intake and nutrient utilization, positive influence on gut health and improved growth performance. One aspect that has to be tightly controlled in order to achieve all these benefits is feed hygiene.

Liquid feed is not only easily digestible for pigs, but it is also an optimal medium for the growth of microorganisms. Yeasts, molds, lactic acid bacteria and enterobacteria are all common microorganisms present in liquid feeds. These contaminates, if present in amounts in excess of certain limits, can reduce feed palatability and feed intake, the uptake of essential nutrients, such as sugar and amino acids by such microorganisms, as well as the formation of harmful microbial metabolites. The result can reduce pig performance including diarrhea, increased morbidity and mortality rates.

Calculating the appropriate amount of pig feed for one feeding is an important part of liquid feeding management. Liquid feed should not stay in the troughs for long to prevent microbial growth. Any remaining feed also will contaminate freshly prepared feed and may lead to decreased productivity.

Organic acids can effectively control the development of yeasts, molds and bacteria in liquid pig feed. Furthermore, using more than one acid (that is a blend of organic acids) broadens the spectrum of activity as each organic acid has its own characteristics. Acids can be used to clean the liquid feeding system, and at the same time, perform the role of acidifiers, which gives an advantage as growth promoters. Microbiological control of raw materials and finished feed with the right use of acids is an essential step towards controlling feed quality. Figure 1  shows the possible uses of acidifiers on a commercial pig farm.

The advantages of using organic acids can be seen from a field trial conducted at an Austrian swine farm with 3,100 grower pigs. The goal was to evaluate feed hygiene and prove the efficacy of acids in controlling the microbial environment of liquid feed.

As a first step, all raw materials were analyzed to determine the amount of bacteria, yeasts, and molds. The materials tested were rye, wheat, corn, water, whey and commercial feed concentrates. Microbiological analysis of these raw materials is shown in Table 1.

As can be seen, from guideline values shown in Table 2, the mold count in rye and wheat, and yeast counts in corn as well as whey were above tolerance levels.

It is known that whey is a very sensitive material, in regards to contamination, as there can be significant changes in its microbial composition during its journey from the dairy plant to the farm. Thus, it was important to prove the quality of freshly delivered whey and whey from the storage tank. Analysis showed that the yeast level was high in both samples. The use of 3 liters of acidifier consisting of formic, propionic, and lactic acids reduced the amount of yeasts in whey to less than 1,000 cfu (colony forming units).

For the microbial analysis of liquid feed from the different stages of feed preparation and distribution, samples were taken from the feed tank, down the pipeline system, from troughs with feed remaining from the previous feeding (which was two hours before sampling) and from troughs with freshly prepared feed. The samples were taken repeatedly from two different barns, in two places in each barn to reduce analytical errors in the trial. Results of the feed analysis for yeasts are shown in Figure 2 .

The second step of the trial was the cleaning pipes using acid and the acidifying of liquid feed. Feeding pipes were treated overnight with a solution of a liquid acidifier consisting of formic, propionic and lactic acids. In the morning, the solution was pumped into the feed tank and diluted with liquid feed to a concentration of 0.3 percent of the acidifier.

Pigs were then fed the acidified liquid feed. Samples of the next feeding were taken from the same places and analyzed for microbial contamination. Results can be seen in Figure 3 . Additionally, the pH drop in feed containing the acidifier was determined. The pH-value of liquid feed without an acidifier was 5.57, which was reduced to 4.89 with 3 liters of liquid acidifier per 1,000 liters of feed.

The results of this farm trial showed the effectiveness of cleaning the pipes with the acidifier. Yeast concentrations in the down pipe and trough were at the same level as in the tank. Troughs with feed remaining from the previous feeding contained acidifiers and, therefore, the amount of yeast was very low.

Experimental and empirical evidence repeatedly demonstrate the effective use of organic acids used as acidifier in cleaning the equipment and controlling microbial contamination in liquid feed. Finding the cause of microbial contamination is the key to successfully eliminating the offensive microorganism using the right combination of organic acids.

“Liquid feed is an optimal medium for the growth of microorganisms”– Nataliya Roth, product manager at Biomin. 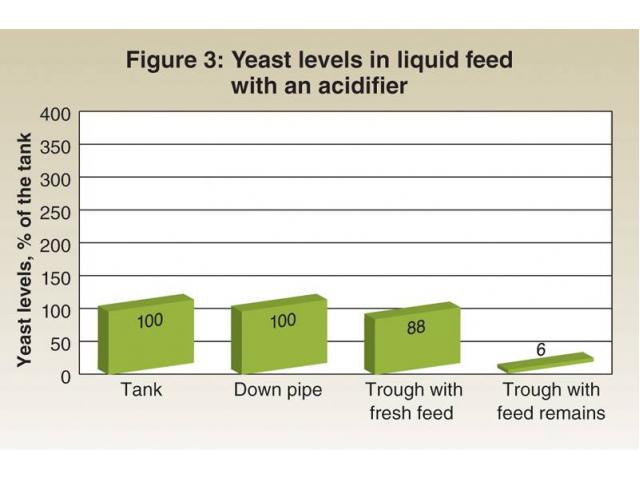 Yeast levels during different stages of the feeding system, with the use of an acidifier. 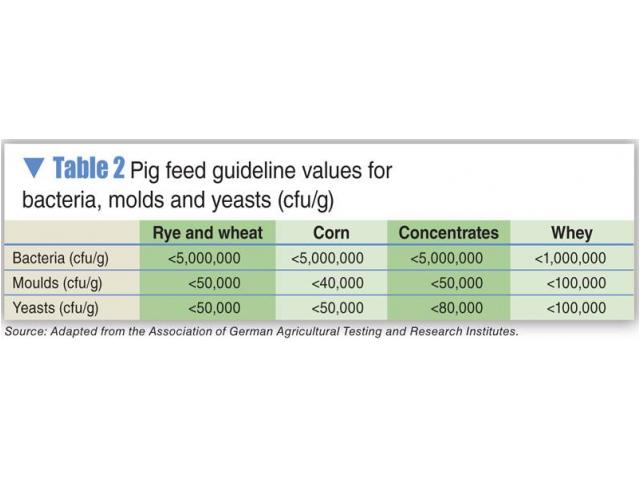 Testing the feed material found that the mold count in rye, wheat, yeast, corn and whey were above tolerance levels. 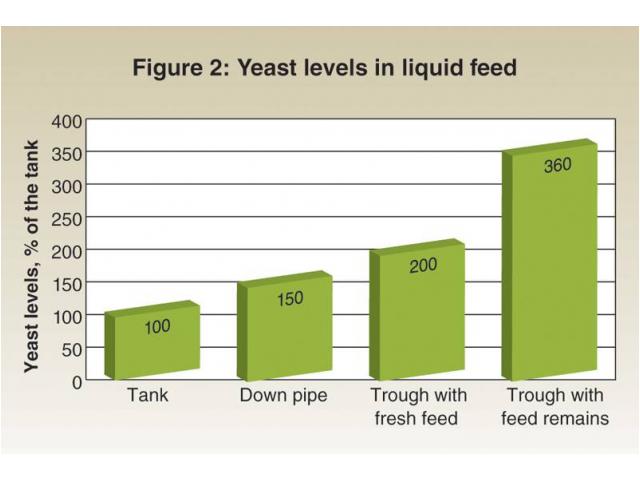 For the microbial analysis of liquid feed from the different stages of feed preparation and distribution, samples were taken from the feed tank, down the pipeline system, from troughs with feed remaining from the previous feeding (which was two hours before sampling) and from troughs with freshly prepared feed. 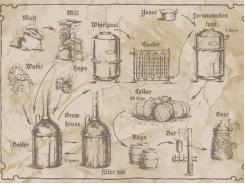 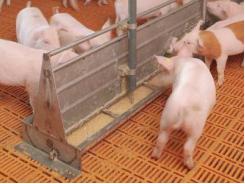 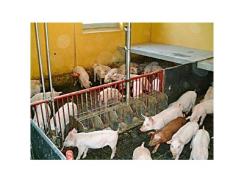