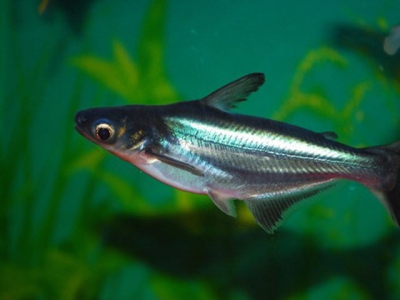 I n aquaculture the importance of mycotoxins –fungal metabolites toxic to animals and humans– first became apparent during the early 1960s with an outbreak of aflatoxicosis in hatchery-reared rainbow trout, Onchorynchus mykiss, after being accidently fed cottonseed meal contaminated with aflatoxins.

Aflatoxins, a type of mycotoxin produced by Aspergillus species of fungi, can colonize many potential aquaculture feedstuffs such as corn, peanuts, rice, fish meal, shrimp and meat meals. Aflatoxin B1 (AFB1) is one of the most potent naturally occurring carcinogenic agents in animals. Initial findings associated with aflatoxicosis in fish include pale gills, impaired blood clotting, anemia, poor growth rates or lack of weight gain.

According to the annual BIOMIN Mycotoxin Survey in 2014, a look at aqua feeds for fish and shrimp showed that, out of 35 feed samples analyzed, 63% of the aqua feed samples were contaminated with aflatoxins at a high average concentration of 49 parts per billion (ppb), with some samples reaching up to 221 ppb. Furthermore, 27 of the 35 feed samples that were analyzed contained more than one mycotoxin. This poses additional risk to animals since in many cases the combined effects of two mycotoxins are higher than the individual effects of each toxin alone.

Due to the importance of tra catfish (Pangasianodon hypopthalmus) production in Asia, BIOMIN conducted complex trials with the main objective of determining the sensitivity of this species to increasing levels of AFB1 contamination in the feed. Sensitivity to AFB1 was evaluated in terms of growth performance, biological changes and disease resistance. An important part of the trial was to evaluate the efficiency of an aflatoxin binder, Mycofix® Secure, in order to counteract the negative effects caused by AFB1. 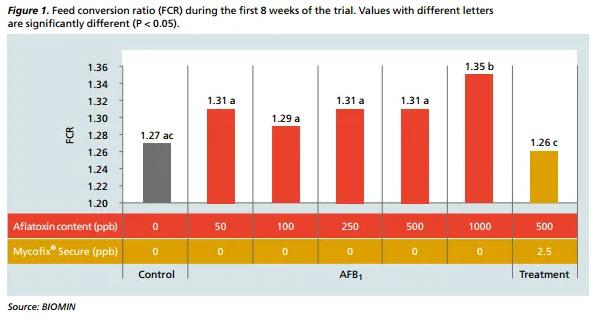 The experiment was conducted at Nong Lam University in Ho Chi Minh City, Vietnam in order to test the effects of aflatoxin B1 and the counteracting properties of the binder Mycofix® Secure. For 8 weeks a total of 100 fish with an average initial weight of 8 g were fed seven diets: one control, 5 with varying amounts of aflatoxins, and one with aflatoxins and Mycofix® Secure.

The specific growth rate (SGR) after 8 weeks was reduced in all dietary AFB1 groups (Figure 2). Here the relationship between aflatoxin contamination and lower growth appeared more linear: higher concentrations of aflatoxins further slowed growth. Fortunately, treatment proved effective. The inclusion of Mycofix® Secure in a contaminated diet significantly improved the results of FCR and SGR. In both cases, similar results were obtained compared to the control group, despite the ingestion of AFB1.

As in mammals, in fish some enzymes can be used as indicators of hepatotoxic effects. One such enzyme –aspartate aminotransferase, or AST– is found in high concentrations in the liver, heart, muscles and kidney. Tissue damage causes the release of AST.

Alanine aminotransferase, or ALT, is present primarily in liver cells and is highly associated with hepatic necrosis, or liver damage.

In the first 8 weeks of trial, no significant difference in the activities of AST and ALT were found compared to the control. However, after 12 weeks a statistically significant increase of the enzymatic activity associated with liver damage was verified in fish fed diets containing AFB1 (Table 1). Fish supplemented with Mycofix® Secure had a statistically significant decrease in the activity of these enzymes, indicating the preservation of liver tissue. 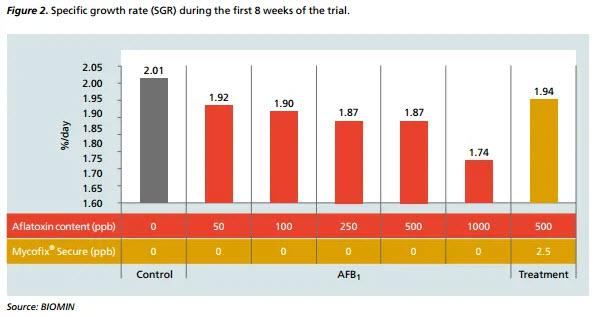 In addition to these negative health impacts, AFB1 is also a potent immunemodulator leading to the suppression of the immune system. In other words, aflatoxin contamination makes animals more prone to infection. In the study, fish fed aflatoxin contaminated diets were evaluated for an additional 4 weeks period (total of 12 weeks) to analyze subclinical effects and disease resistance under the challenge with the gram negative bacterial strain Edwardsiella ictaluri (4.4 x 106 CFU/ mL). 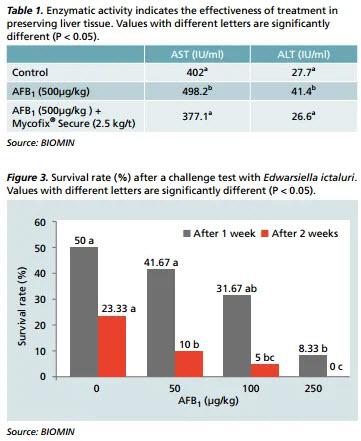 The danger posed by aflatoxins to aquaculture became apparent in the 1960s. While much has been learned since that time, further research regarding the effects of aflatoxins on health and performance of aqua species is still needed.

Our research shows that in tra catfish —an important species in the Asian aquaculture industry– aflatoxin contamination results in; lower feed efficiency, lower growth, the elevated presence of enzymes associated with liver and tissue damage, and lower disease resistance.

Consequently, constant monitoring, prevention and mitigation of aflatoxin contamination are therefore necessary in the aquaculture industry and in tra catfish production in particular. 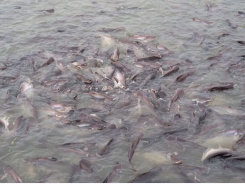 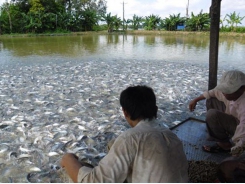 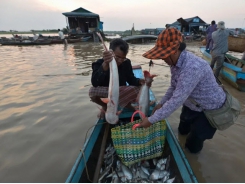