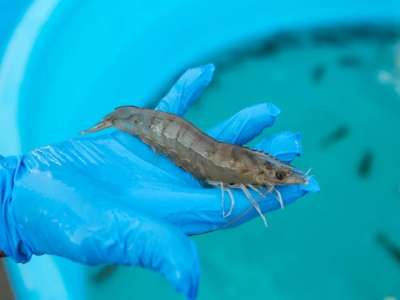 How American Penaeid rose from the rubble of two hurricanes to create a new model for shrimp production in the US.

Robin Pearl is the CEO and chairman of the new company American Penaeid, located in Pine Island, Florida. His story of recent success is remarkable – not only because his business survived Hurricane Michael in 2018 and bounced back quickly into production, but also because he managed to develop a new world-class breeding programme in the same period.

In creating a new genetic line, known as High Vigor, Pearl’s contribution to shrimp aquaculture might be nothing less than ushering in a paradigm shift – at the very least it’s engaged in solving some of the sectors major problems and is creating new opportunities for growth.

The company, which is a subsidiary of American Mariculture, has been successfully growing shrimp for consumption while also selling broodstock internationally for reproduction and post-larvae for over two years. Shrimp genetics and a breeding programme have been maintained as specific pathogen-free (SPF) at SunShrimp (the brand under which American Mariculture operates) for eight generations and more.

The more recent breeding innovation for American Mariculture began in 2016 when the survival rate of shrimp post-larvae, bought from the then well-known Shrimp Improvement Systems hatchery in Florida, began declining, bottoming out at a troubling 5 percent. After much input from consultants, the infectious bacteria known as Vibrio was suspected. A plethora of potential remedies was employed, such as alternative feed types, disinfectants, probiotics, prebiotics, essential oils and different aeration schemes. However, the only effective solution came with changing the source of the genetics for shrimp production. The animals that were dying from Vibrio were considered weak and it was suspected that they were severely inbred, resulting in a decreased immunity.

The company then obtained a new APE shrimp line from Ecuador. These new genetics were selected primarily for disease resistance, and the shrimp grew very slowly, at about 1g per week (and would not grow beyond 15g). Shrimp that are selected for “good” growth at a commodity size typically will not grow well at a larger size and may not grow much at all above the size they have been selected for. This is a typical bimodal growth model due to differential size selection pressures. In other words, selecting for a faster growing small shrimp does not guarantee that there will be fast growth for a larger size shrimp as well.

New genetic potential for shrimp production was then developed from the APE line. Animals were selected for survival first and growth second. This was repeated over four generations, which ultimately resulted in shrimp with double the growth rate of the previous line – an incredible increase in growth potential over a limited time period. Individual DNA analyses were then conducted, and these were able to identify family groups that were sufficiently genetically distinct to avoid inbreeding. The upshot was that the newly bred shrimp could be harvested at 30g with an exceptional 80 percent survival rate.

This was the start of a profitable breeding programme, and in 2016 this new growth line of shrimp was named API (American Penaeid) High Vigor. The success of this new, fast-growing High Vigor line of shrimp was attributed to the intense selection protocols and new genetic selection techniques. By conducting up to 10,000 DNA tests monthly, selection is tight with survival being the primary characteristic, while growth remains a secondary selection criterion.

The selection scheme is built around selecting the fastest growers within the best and strongest surviving families of shrimp. With this new idea proving effective it is spreading throughout the industry; thinking is shifting in countries such as China, which is coming around to the idea of growing larger shrimp that have better survivals, instead of just selecting for growth. This is resulting in a change in mindset, focusing more on quality than quantity.

Pearl claims that “our shrimp generally have better survivals than our competitors’ shrimp” and this in part has led to the accelerated growth of the company.

Unfortunately, American Mariculture (AKA Sun Shrimp) had to deal with minor damage and major shrimp losses from a hurricane in 2017, and major damage and losses from Hurricane Michael in October 2018. Michael required the company to salvage what animals they had remaining after a nearly a total loss of their stock. These shrimp were then placed into the new genetics and hatchery programme, which in turn resulted in the formation of the new genetic line known as High Vigor.

Remarkably, the farm was quickly rebuilt and is now at 100 percent capacity, producing 230 tons of larger-than-commodity shrimp per year. With this production level established, the farm has been profitable for the last year, shipping to upper-echelon restaurants in the US. Currently there are plans to expand shrimp production to include shipments to the major retail supermarkets Costco and Kroger.

According to Pearl, the biggest challenge for success was “Getting all the parts to work together in unison. Maturation, spawning, larvae culture, production, harvesting, shipping and marketing.”

Future options for realising marketing potential in the US might come from creating a new brand, and publicising the superior quality of fresh cultured shrimp that’s shipped directly to market. That said, according to Pearl, his biggest challenge currently is in meeting the incredible demand for his shrimp.

Shrimp production at American Penaeid consists of a three-tier system in which post-larval shrimp are stocked into a nursery tank for 35 days, followed by 65 days in a juvenile section, finishing up with another 65 days in a final grow-out stage. The system is composed of biofloc raceways where all waste is recycled through the system. There are a total of 144 tanks on 8.5 acres and these produce a 900kg harvest each day of the year. The shrimp are harvested at 25g with an impressive biomass of 5kg/m3, an FCR of 1.7 and average survival rates of 80 percent. Shrimp are immediately put on ice and sent to market the same day, adding to the perceived value of the new brand. 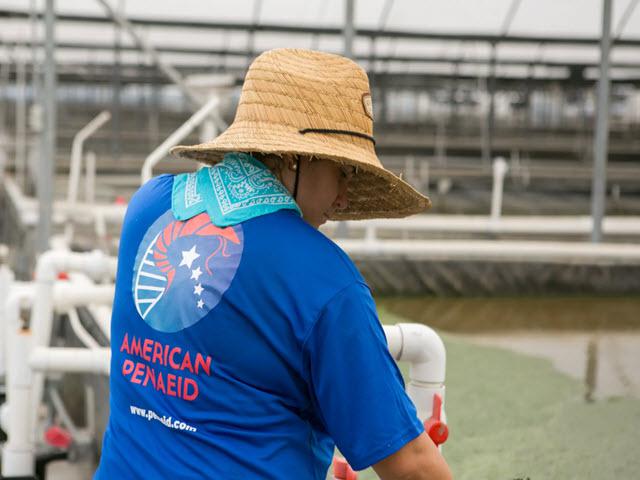 American Penaeid has quickly advanced and is now the major supplier of post-larval shrimp for the United States and Europe. In addition, it is supplying 20 percent of the world’s shrimp broodstock, with destinations including shrimp producers in China, Vietnam and Central America. The company plans on shipping broodstock to India in the coming months as it is considered to be the country with the fastest-growing aquaculture industry. Broodstock are sold at $130 per pair and have survived for up to 66 hours in transit. The profit potential of broodstock sales is far ahead of shrimp grown for consumption.

In accounting for the rapid rise in his broodstock and post-larval business, Pearl states: “We never had to advertise. Our customers find us. They hear good things about our broodstock and place orders – recently doubling and tripling their orders in some cases.”

American Penaeid has become a success story for US aquaculture through its ability to adapt to meet challenges. Using ingenuity and by advancing genetic protocols to create a brand new line of shrimp, it has managed to combine the best in high growth and high survival rates. Moreover, the company has proven that success can be obtained in a very competitive shrimp production market by forging a completely new business model: providing continual fresh seafood shipped directly to restaurants and retail chains. 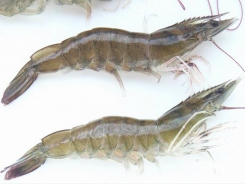 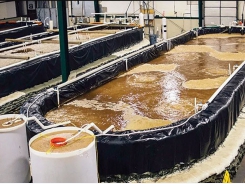 Hyper-drive: the pros and cons of intensive RAS production in the US 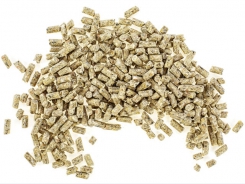