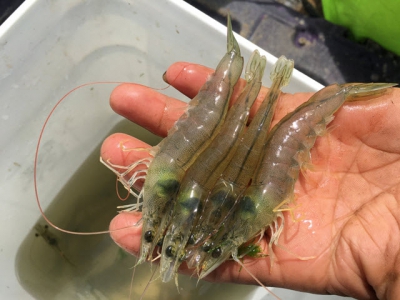 Globally, production of farmed shrimp is expected to increase at a 5.7 percent compound annual growth rate (CAGR) from 2017 to 2020.

Fig. 1 summarizes the production estimates for global production from 2010 to 2020, combining data from the Food and Agriculture Organization of the United Nations (FAO) and the GOAL surveys from 2011 to 2018.

(Editor’s note: GAA members have access to both the Global Shrimp and the Global Finfish Production Review and Forecast slides, presented at GOAL. Annual memberships are available for as little as $50. Click here for more information.)

Respondents in the GOAL surveys reported substantial production declines in China, Thailand, Indonesia and Mexico in 2013, following declining harvests in China, Thailand and Vietnam in 2012 related primarily to outbreaks of Early Mortality Syndrome (EMS) that emerged initially in China in 2009. Surging shrimp prices in international markets during 2013 were consistent with industry expectations of declining production.

Nevertheless, FAO data do not reveal any major impact of diseases in Chinese production during 2009-2013; on the contrary, China is reported by FAO to have increased production from 1.3 to 1.7 million metric tons (MMT) in this period, growing further to 2.0 MMT by 2016.

Production is expected to increase with a 5.7 percent compound annual growth rate (CAGR) from 2017 to 2020. This will result in growth of 18 percent over 2017 levels and a global farmed shrimp harvest of 5.03 MMT (approx. 5.4 MMT including M. rosenbergii). GOAL forecasts rely on the assumption that major disease crises are averted in the near future. 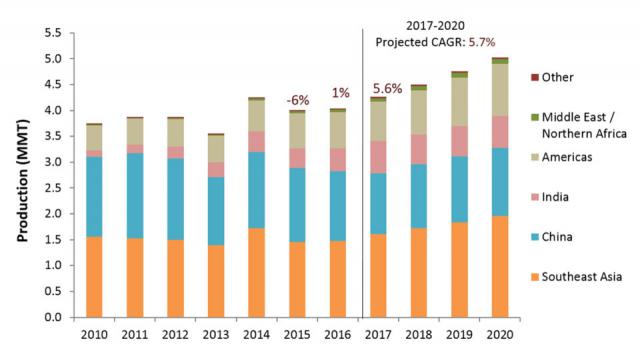 In conclusion, the Asian industry seems to be on the path of recovery following the substantial production declines during 2012-2015 caused by pervasive disease outbreaks. Production is expected to exceed pre-EMS levels in 2018, driven primarily by growth in Vietnam, Indonesia and India. China will remain the largest producer, but its growth will slow. Regional production is expected to exceed 3.9 MMT for the first time in 2020. Of course, this set of estimates assumes that no major epidemics will break out in the region in the next few years.

Fig. 3 presents estimates for the major producing nations in Latin America.  The most important development in the region is the spectacular growth of Ecuadorian shrimp farming. Ecuador has fully taken advantage of the pervasive disease crisis in Asia to increase exports to European and Asian markets. Production is expected to reach 570,000 MT by 2020, with a CAGR of 9.2 percent between 2015 and 2020. Ecuador will continue to account for more than half of farmed shrimp supply in the Western Hemisphere.

The GOAL survey also collects information on trends in size categories and product forms. A recent and notable trend in Asia is the increase of green shrimp relative to other product forms such as peeled. While head-on and head-off green shrimp accounted for only 25 percent of production in the 2008 survey, it accounted for 48 percent in the most recent poll. These changes may signal the growing importance of the domestic Chinese market, which has a preference for green shrimp.

Production in Latin America continues to be oriented towards green shrimp. Head-on shrimp has become the dominant product form over head-off shrimp.  It accounted for 63 percent of production in 2017, up from 40 percent in 2007. Increased shipments of Ecuadorian shrimp to European and Asian markets are an important factor driving this trend.

Respondents in Asia have reported a move towards production of smaller shrimp sizes (51-60 and smaller) since 2011 (Fig. 4). The share of small counts increased from 27 percent to 48 percent between 2010 and 2017.  Early harvests caused by EMS and other diseases is a likely driver of this trend.

“Diseases” was once again identified by respondents from Asia as the top challenge faced by the industry. “Banned chemicals/antibiotic use” was second. “International market prices” and “feed costs” were a virtual tie for third. “International market prices” was the seventh-most important issue in the last year’s survey, suggesting that farmers are increasingly concerned about price competition as the global industry recovers from the major disease crises.

In Latin America, “international market prices” emerged as the most important issue (up from third place in the 2017 survey), confirming the trend reported by Asian respondents. “Feed costs” and “diseases” completed the set of top three issues in Latin America.

Perceptions on diseases have changed remarkably over the last 10 years. In the 2007 survey, “diseases” did not make it among the top three challenges for either Asian or Latin American producers, who were more concerned about feed costs, market prices and trade barriers. Disease issues have moved to the forefront in the most recent years, particularly in Asia. However, as production levels recover, farmers are once again identifying international market prices and feed costs as more pressing issues.

Most Asian and Latin American respondents expect global economic conditions to either improve or remain stable in 2019. Most respondents also expect the global shrimp market to strengthen in 2019. In general, they are not a bullish as they were in last year’s survey. 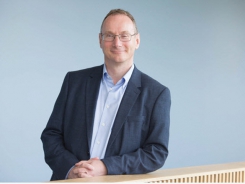 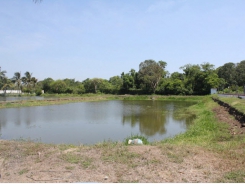 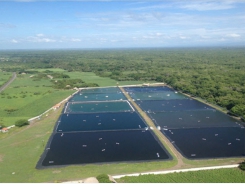