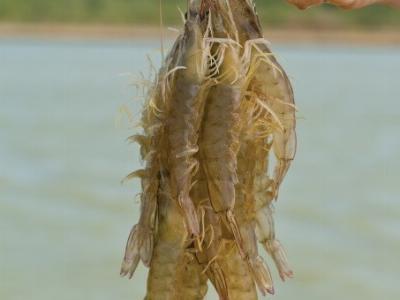 Shrimp, the most valuable aquaculture species

Aquaculture is the fastest growing industry producing animal protein, with average annual growth rate of 10 percent during the 1980s and 1990s. For the decade 2012–2022, aquaculture is forecasted to grow between 29 and 50%. (FAO 2014). The production of crustaceans has even shown an average annual growth rate of 18% over the period 1970-2008. Whereas commercial shrimp farming did not exist until the mid-80s, today 60% of the shrimp on our plate is farmed. Furthermore, shrimp are the most valuable farmed aqua species worldwide, estimated on 21 billion USD production value in 2013 by FAO, and exceeding by far farmed salmon. 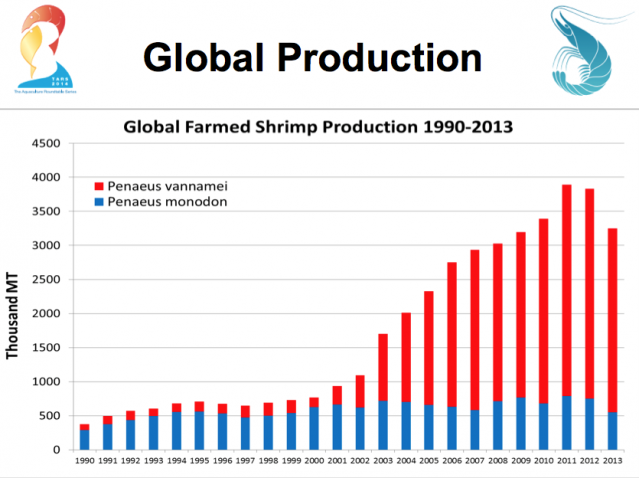 Farming of marine penaeid shrimp boomed from a mere 100 MT in the 80s to close to 4 million Mt in 2010 (Fig. 1), with top five producers being China, Thailand, Vietnam, Indonesia and Ecuador. The industry, driven initially by high profitability, managed to overcome several viral outbreaks. The shrimp farming sector is highly fragmented over many countries and farming methods lack standardization. Therefore it is a complex market for the supplying industry to bring innovation. This requires a highly specialized knowledge of the sector and laborious demonstration and adaptation of applications to local farming conditions.

Diseases are number one threat

Despite this apparent success story in terms of production expansion, shrimp production in many regions continues to suffer important economic losses due to the impact of a wide variety of diseases. The white spot syndrome virus (WSSV), one of the main causes of the stagnating shrimp industry in the nineties, continues to affect production in Mexico, Central and South America where the extensive farming methods in large ponds do not allow effective biosecurity measures against the virus.

South East Asia's shrimp production has been ravaged since late 2012 by a new disease known as early mortality syndrome (EMS). The biggest impact was felt in 2013 when Thailand, until then the second largest producer after China, saw its shrimp production drop by more than half in 2013 as a result of EMS. Thailand’s production has not seen any recovery till today and the disease's impact is causing a shift in the distribution of global shrimp supply, with Indonesia, India and Ecuador taking top positions ahead of traditional top producers Thailand and Vietnam.

“Early Mortality Syndrome” (EMS), more technically known as acute hepatopancreatic necrosis disease (AHPND), was first reported in China in 2009. It has since spread to Vietnam, Malaysia, Thailand, and Mexico. EMS outbreaks typically occur within the first 30 days after stocking a newly prepared shrimp pond, and mortality can exceed 70%.

EMS is caused by specific strains of a relatively common bacterium, Vibrio parahaemolyticus, which are transmitted orally, colonize the shrimp gastrointestinal tract and produce a toxin that causes tissue destruction and dysfunction of the shrimp digestive organ known as the hepatopancreas.

The pathogenicity of EMS/AHPND is most likely regulated by a mechanism called quorum sensing, which allows the Vibrio colonies to coordinate the release of the potent toxin. Research lead by National Cheng Kung University, Taiwan recently elucidated that the virulence of these opportunistic Vibrio strains is due to a binary toxin which is encoded on a plasmid and structurally similar to bacterial toxins capable of killing insects.

EMS, being caused by an opportunistic bacteria that is difficult to eradicate from the production environment, requires a very different approach than the current strategies against white spot virus (WSSV) based on specific bio-security measures.

Avoiding early contamination of the brood stock and larvae, combined with continued control of the microbial developments particularly during the initial month of the cycle, is crucial to control EMS. In this regard, intensive nursery/pre-growing systems are now being explored by the industry to produce juvenile shrimp throughout the critical stages affected by EMS. These systems allow superior control over nutrition and microbial environment compared to direct stocking into the grow out ponds.

The use of antibiotics to control microbial developments throughout the production process is not desirable, due to the risk for building up resistance and its rejection by legislators and consumers. The shrimp industry requires alternative ways to control the microbial ecosystem in production systems.

Sustainable approaches to modulate the gut microflora in shrimp include the use of selected bacteria to inoculate the gut (probiotics) and specific natural compounds (so called “botanicals” or “phytobiotics”) capable of modulating the microflora towards a favorable composition. Provided the botanical formulation is heat stable, it can be easily incorporated into the feed at the feedmill and therefore be present in every meal from the starter feed onwards, without requiring major adaptations of the production protocols at the nursery or farm. 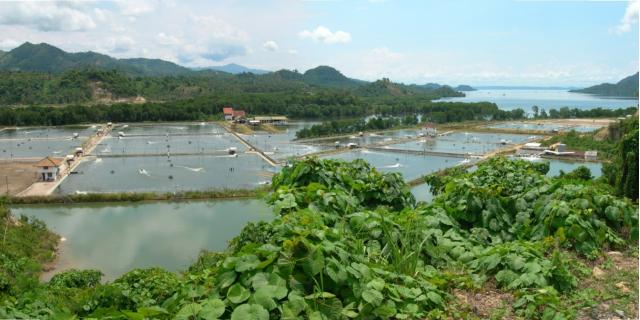 Functional feeds containing gut health promotors allow to deliver with every meal an adequate concentration of natural antimicrobial activities into the shrimp gut. These feeds are an important component of any strategy to prevent EMS. However, the success of this approach will depend on the efficacy of the selected gut health promotor against the pathogenic bacteria involved in EMS.

Synergistic blends of natural compounds can be selected on their bacteriostatic and bactericidal properties against a specific range of pathogenic bacteria in vitro. In this way, different Vibrio species, including Vibrio parahaemolyticus, appeared to be highly sensitive to a natural feed additive composed of a synergistic blend of antimicrobial compounds (Fig. 2). 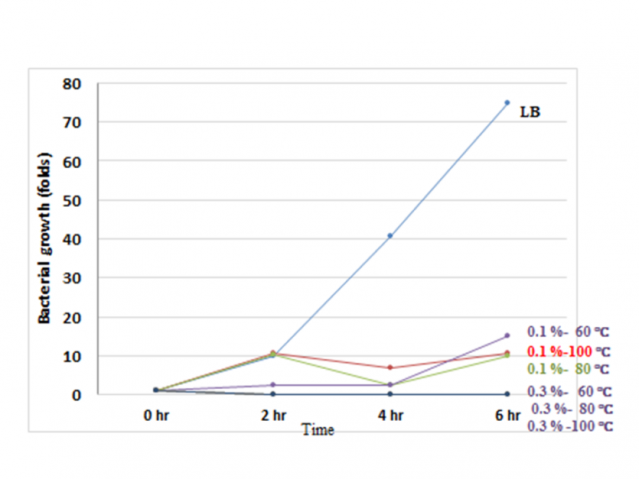 Recent research is showing that apart from direct bactericide/bacteriostatic effects, selected combinations of antimicrobial compounds are at the basis of more complex mechanisms to steer microbiota composition.

In human medicine, compounds active in Quorum Sensing (QS) disruption are increasingly investigated as potential alternatives to antibiotics due their efficacy at low concentrations and the low chances on bacteria developing resistance against these non-lethal molecules. Quorum Sensing (QS) is a form of bacterial communication, based on the production and secretion of signaling molecules which can be detected by adjacent bacteria. When population density rises, these molecules will accumulate in the extracellular environment, thereby providing a means for bacteria to quantitatively monitor the presence of other bacteria. These signaling molecules will, when reaching a certain threshold concentration, initiate intrabacterial signaling that culminates in the activation of specific genes. Blocking bacterial communication (called quorum sensing inhibition or also quorum quenching) is a novel way of preventing them to trigger pathogenicity, without exposing them to a selective pressure to survive (Fig. 3).

Nutriad research has shown that synergistic blends of natural antimicrobial compounds can function as powerful interrupters of bacterial QS signaling in a typical aquaculture pathogen such as Vibrio harveyi at concentrations well below minimal inhibitory concentrations. 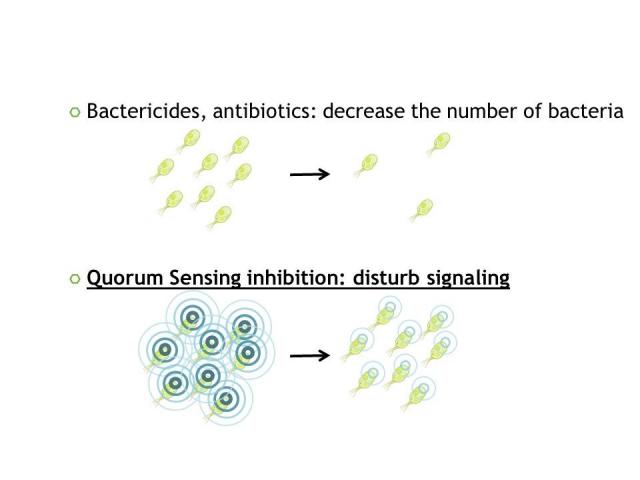 Natural feed additives combining different action mechanisms against Vibrio species such as direct bactericide/bacteriostatic properties have proven to be effective in improving survival under challenging situations where shrimp are exposed to bacterial pathogens.

The inclusion of such a botanical feed additive in a pelletized feed under standard industrial conditions at the feed mill improved survival under production conditions in a semi-intensive shrimp farm in Panama with 24% and 18% compared to the control group during two independent production cycles (Cuellar-Anjel, et al., 2011; Fig. 4). In these production trials, the main disease challenge at the farm consisted of WSSV and Vibriosis. Significant improvements in shrimp survival have been obtained in different trials in both areas affected by non-EMS Vibrio/WSSV as well as areas affected by EMS (Fig. 4). Loc et al. (2015) was able to confirm the effect of synergistic phytobiotics in a controlled challenge trial under laboratory conditions; showing 62-107% increased survival in shrimp that had received the additive during 3 weeks prior to the experimental infection, compared to unsupplemented control groups (Fig. 4).

These lab and field results indicate that specific health promoting feed additives have a clear potential to bring up survivals from medium levels (60-70%) to pre-EMS levels (>85%). However, farm results also show that such feed additives are not a magic bullet but rather an essential component of a total farm management strategy aiming at controlling the microbial balance throughout the production cycle. 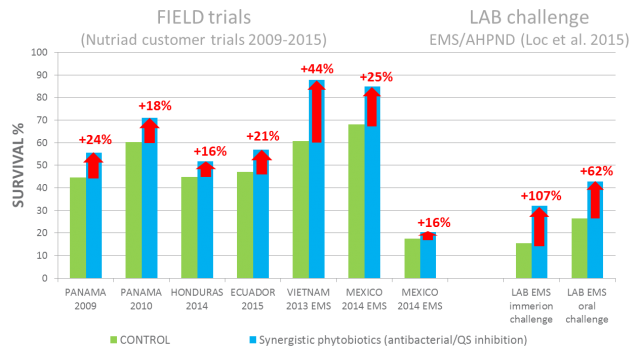 Fig. 4: Effect of functional feed additives with combined anti-bacterial/QS inhibition action on survival of Penaeus vannamei in various production trials in the field (in the absence or presence of EMS; left) and a controlled infection trial in the lab (right). 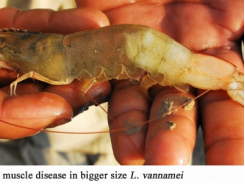 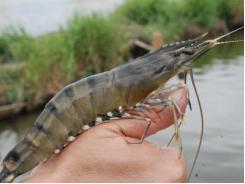 Use Of Ulva Lactuca Studied In White Shrimp…