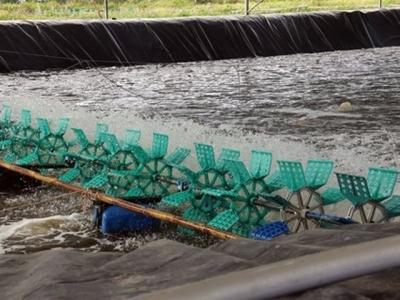 Farmers should reduce their volumes of shrimp at present to deal with a fall in purchasing price and wait for a recovery in shrimp prices on the world market, according to the Viet Nam Association of Seafood Exporters and Producers (VASEP).

A shrimp farm belonging to Nguyen Thanh Hai in Nam Yen Commune, Kien Giang Province. This is one of the largest industrial shrimp farms in An Bien District with an area of over 10 hectares.

The association said shrimp output of major global producers was predicted to reach 3.5 million tonnes in 2018, marking the highest output over the past decade.

The increase in world shrimp production was due to the growth in major suppliers such as India, Ecuador, China, Viet Nam and Indonesia. In that situation, importers would create pressure to reduce prices, leading to declines on the global and domestic market, it said.

Truong Dinh Hoe, VASEP’s general secretary, said the global shrimp supply had risen sharply in the first few months of this year, while shrimp inventories in the US and among local businesses remained high.

VASEP reported that the US had a high inventory after US shrimp imports increased by 10 per cent in 2017 and 15 per cent in February this year.

The drop in prices hit not only Viet Nam but also other shrimp suppliers such as Ecuador, Thailand and Indonesia, causing problems for many farmers, Hoe said.

With those prices, farmers could break even or make low profits, with some even sustaining losses, according to the association. The situation has forced most farmers to stop shrimp production or reduce the quantity of reared shrimp, waiting for prices to recover in the coming months.

Trinh Duc Huan, a farmer who has produced shrimp for 20 years in Ly Nhon Commune, Can Gio District, HCM City, said this was the first time he had seen such a drop in shrimp prices. Prices were low, but there were no buyers. Even shrimp reared through high technology processes according to VietGap standards like his also faced reduced prices.

At present, the selling price is lower than the production cost, according to Huan. If shrimp production was halted, equipment and machinery would be damaged. He would suffer even higher losses because investment in hi-tech shrimp production stood at VND1 billion per hectare.

Ho Quoc Luc, General Director of Sao Ta Food Joint Stock Company said in fact, the price reduction had been predicted. In 2017, the consumption of shrimp increased on the world market, leading to higher selling prices of shrimp for farmers. As a result, many countries had set a target for growth in areas rearing shrimp, including Viet Nam.

In addition, some countries such as Indonesia and Ecuador are harvesting shrimp, leading to higher supply around the world.

Meanwhile, now is not a time of strong shrimp consumption, so businesses do not want to purchase. The suppliers have to accept the low price if they want to sell shrimp, leading to a drop in the export price of shrimp.

According to shrimp processing enterprises, the price of raw materials and exported shrimp decreased from the end of February 2018. Now, shrimp export prices have fallen by 20 per cent compared to the end of 2017 and nobody knows how much the price would fall over the coming months.

This is the main reason why processing enterprises do not dare buy more raw materials, even with low prices.

Hoe said the falling prices and the large supply would be only for the short term so cutting the areas rearing shrimp is essential. Therefore, local authorities should advise farmers to restrain farming of shrimp during this period. With the current production process, when prices recover, the shrimp production of farmers would be more stable.

VASEP said that farmers should remain calm and monitor the market situation. They should also follow the authorities’ recommendations in shrimp production.

According to many experts, after the price of shrimps fell sharply, farmers in Thailand and India began to drop areas rearing shrimp. The world shrimp supply was forecast to decrease.

From the third quarter, local factories would increase purchasing raw shrimp material due to increasing demand from import markets, leading to higher shrimp prices, they said.

Shrimp imports of major markets were expected to increase from the end of the second quarter or early in the third quarter.

Tran Van Linh, chairman of the Director Board of Thuan Phuoc Seafood and Trading Joint Stock Company, said reputable export processing enterprises are often involved in global supply chains. Therefore, when the market price drops, the businesses would share losses with partners in the supply chain. Meanwhile, the businesses themselves have to adjust their export targets according to market supply and demand.

The most important factor for them is to keep export markets, partners and profits but not increase export value, he said, so though there are fluctuations in the market, the businesses should focus on enhancing prestige and building their brand.

Luc agreed and said to become a reputable exporter in the supply chain, enterprises must have clean shrimp varieties and shrimp production systems meeting international standards such as GlobalGap and ASC.

To have certificates on using international standards for their production process, farming households must join cooperative models or large farms, he said. Those actions would improve competitiveness of the local shrimp production industry and quality of shrimp products.

Hoe said Viet Nam’s shrimp industry had great potential in aquaculture and processing and the industry would develop further if it controlled antibiotics, traceability and disease.

According to experts the violations of antibiotics and chemicals have occurred in the production process but not the processing phase. Therefore, processors have the responsibility in controlling the material that has been contaminated with antibiotics to take them out of the factories.

The businesses and the VASEP have proposed the Ministry of Agriculture and Rural Development (MARD) to develop a programme on controlling impurities and antibiotics in shrimp and seafood production. This is to protect the image and reputation of Viet Nam’s shrimp and seafood to overcome more stringent technical barriers of importing countries.

In addition, the state should also take measures on managing the price of inputs such as varieties and feed, to reduce production costs for the benefit of farmers and more sustainable development of the industry. 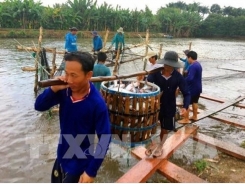 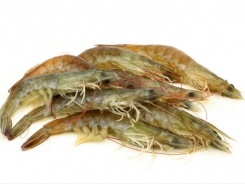 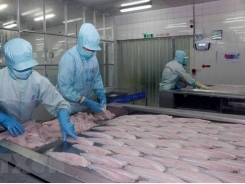 Tra fish export to US increases despite anti-dumping…