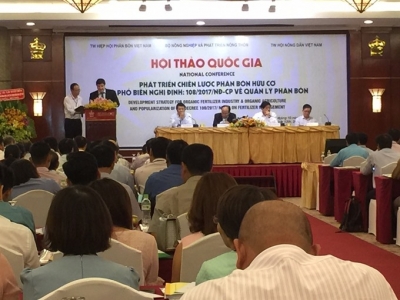 A national conference on development strategies for the organic fertiliser industry and organic agriculture was held in HCM City yesterday. — VNS Photo

Ho Chi Minh CITY — It is time to increase the production and use of organic fertilisers to foster organic farming, according to the Việt Nam Fertiliser Association.

“Many countries have shifted to organic agriculture to ensure sustainable agriculture, food safety and people’s health.”

Việt Nam’s agriculture has made great strides in recent decades, with productivity shooting up to not only meet domestic but also export demand.

But its challenges are increasing in the form of natural disasters, saltwater intrusion, droughts, flooding and soil exhaustion due to overuse of fertilisers.

Lương Quốc Đoàn, deputy chairman of the Việt Nam Farmers Association’s executive committee, said: “It is time for Việt Nam’s agriculture to have new directions to enable it to develop more sustainably and efficiently, and organic agriculture, through eliminating the use of chemical fertilisers and enhancing the use of organic ones, is among the new directions.

“Organic fertilisers are among the important factors in pushing Việt Nam’s agriculture towards organic farming.

“But domestic supply of organic fertilisers is still very modest compared to demand.”

“Statistics provided by the Ministry of Agriculture and Rural Development reveal that the agricultural sector annually produces around 40 million tonnes of straw, corn and sugarcane refuse and over 25 million tonnes of animal and poultry waste, which are potentially raw materials for marking organic fertilizers, but for a long time we did not take advantage.”

"With such volumes of agricultural by-products, we can produce 5-6 million tonnes of organic fertilisers," he said.

Besides, their impact is not as quick as that of chemical fertilizers, he said.

“Despite facing difficulties in developing the organic fertiliser market, it is a vital trend and the Government should offer support through appropriate policies and technologies,” Đoàn said.

At the conference, the Crop Production Department issued Decree No 108/2017/NĐ-CP on fertiliser management to encourage legitimate producers and eradicate fake products, a widespread problem.

Hoàng Trung, head of the department, said the new decree was expected to address the shortcomings of the previous decree, in which many provisions have become outdated and not impracticable.

The new decree would improve oversight to crack down on fraudulent companies, he said.

Under the former decree, both the Ministries of Agriculture and Rural Development and Industry and Trade managed fertilisers, causing an overlap, he said.

"The new decree resolves this issue since the agriculture ministry becomes the only agency in charge," he said.

The department also solicited contributions for a draft decree on dealing with violations in the fertiliser sector, which envisages increasing fines for certain violations.

The department would continue to seek feedback from relevant agencies and businesses to complete the draft before sending it to the Government for approval in December, Trung added. 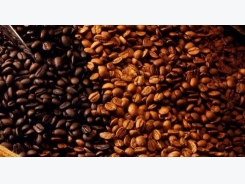 Coffee exports down in volume, up in value 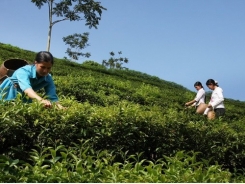 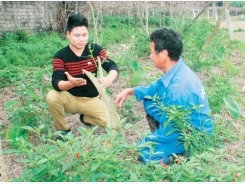 Lack of raw material to prevent export of…