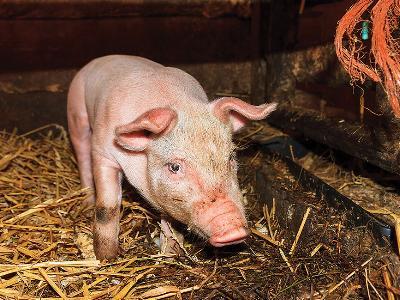 There are a variety of causes of piglet diarrhea; understanding the factors involved will help producers control it.

Suckling piglet diarrhea is the most common condition affecting swine, often resulting in high mortality and serious economic losses. Morbidity due to mild and chronic piglet diarrhea is an economic concern because of piglet weight loss and the risk of permanent intestinal damage. An old rule of thumb from research is that one day of suckling pig diarrhea slows growth to market weight by five days.

There are primary infections of the intestines that cause diarrhea, but piglet diarrhea can result from systemic viral infections such as porcine respiratory and reproductive syndrome (PRRS), pseudorabies or classical swine fever. Conditions affecting the sow or her ability to produce milk may result in diarrhea in her piglets. Complex causations with both sow and piglet factors are common. Excessive milk production in lactation is seldom a root cause of piglet diarrhea, but lactation failure does frequently lead to piglet diarrhea. Neonatal piglets are dependent upon antibodies in colostrum and milk for protection against pathogens. Causes of lactation failure include sow constipation, over-conditioned sows, sub-optimal culling and infectious porcine anemia due to “Haemoplasma” (Eperythrozoon) suis.

Coccidiosis is a mild diarrhea in piglets older than five days that is not bloody but can be any color: white, yellow, green, or brown and often changes color. Diagnosis is by histopathology, mucosal smears or observing fecal oocysts. Coccidiosis can be prevented by oral toltrazuril given on day five.  Disinfection with 1 to 2 percent sodium hypochlorite (NaOCl) destroys oocysts. Coccidiosis seldom kills piglets but damages the small intestine.

Clostridium perfringens type C causes a severe acute fibrinonecrotic enteritis in the neonatal pig with black or bloody feces and rapid high mortality, but chronic forms exist. C. perfringens type A is more common, occurs at any age and causes a mild diarrhea resembling coccidiosis. Piglets recovering from clostridial diarrhea express non-uniform growth. Diagnosis of clostridial diarrhea is made by necropsy, intestinal smears, histopathology, culture and toxin testing. Commercial or autogenous sow vaccines are preventative. Amoxicillin is a common piglet treatment. Bacitracin at 250 ppm in the lactation diet and sporocidal disinfectants reduce piglet exposure. Vitamin E/Se deficiency may trigger clostridial diarrhea. Clostridium difficile is emerging as a severe colitis particularly where there has been heavy use of antibiotics. Vaccines against C. difficile are under development.

Escherichia coli is still prevalent as a cause of piglet diarrhea at any age despite availability of effective vaccines since the mid 1980s. Antibiotics can be appropriate for emergency control, but E. coli rapidly develops resistance under routine antibiotic use. Some resistant E. coli can penetrate the gut and reach the brain and organs of diarrheic pigs. Sow vaccination with 4-strain (K88, K99, 987p, F41) or autogenous vaccine controls colibacillosis.

Rotavirus typically produces a mild diarrhea and villus blunting in pigs about 10 to 14 days of age or older. Chilling is a factor reducing immunity and resistance. Rotavirus is diagnosed by histopathology, but kits and PCR methods exist. There are vaccines, but the disease is generally controlled by feedback of feces from diarrheic pigs to sows two to three weeks before farrowing, and by keeping piglets warm and dry.

Transmissible gastroenteritis (TGE) and porcine epidemic diarrhea (PED) virus are similar diseases caused by unrelated alpha-coronaviruses that destroy the absorptive cells of the intestinal villi. All ages of swine are susceptible, and mortality can be high in piglets. Chronic forms can cause piglet losses for months where sow immunity is low and sanitation is less than good. The PED virus was reported in the U.K. in 1977, in Canada (1980) and afterward across Europe and Asia. Highly virulent PED virus forms emerged about 2010. PED virus has mutated rapidly and immunologically distinct spike variants exist. TGE produces more severe mortality than PED virus but is seldom diagnosed presently, while PED virus is far too common. Cold winter weather aids the spread of the PED virus and TGE, but both can occur year-round. Diagnosis is made by necropsy, histopathology, PCR and simple kits.

Oral or intraperitoneal electrolytes support the pig, and antibiotics may be useful for secondary bacterial infections, but PED virus and TGE treatments are not satisfying. Immunity that can protect piglets is induced in sows two to three weeks after oral exposure to PED virus or TGE, and feedback to sows of intestinal material and feces from pigs in the early stage of the disease is commonly used for control. The PED virus can be transmitted by sow milk, and a total sows' herd feedback often results in an uptick in piglet mortality. On the other hand, failure to induce whole herd immunity frequently results in nagging losses from protracted chronic forms. PED virus and classical swine fever are often concurrent diarrhea causes in CSF endemic areas, and extremely high piglet losses may result from feedback of CSF virus to sows in such situations.

General control of piglet diarrhea involves good sanitation and all-in, all-out management of farrowing. Vaccinate to control E. coli. Reduce routine antibiotic use. Sanitation practices should include use of an alkaline cleaner (use eye protection!) to remove biofilms followed by a strong, effective and situation-specific disinfectant. Keep piglets warm, dry and free from drafts. Biosecurity practices include sanitation of trucks, isolation of incoming breeding animals, and changes of clothing and footwear. Diagnosis is important in preventing and controlling swine diseases and is the first step to understanding what measures are appropriate. 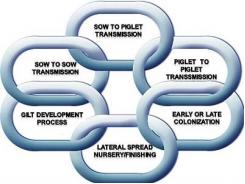 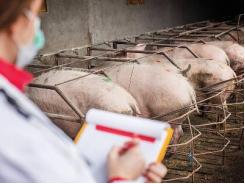 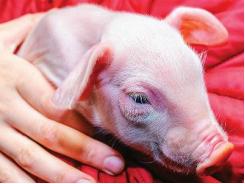