The time is ripe for rice-fish culture 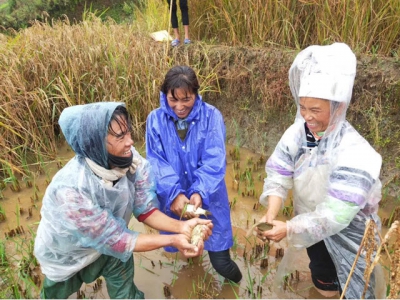 The area of China devoted to rice-fish culture systems grew by 11 percent in 2016-2017 and now covers about 2 million hectares of the country, according to a new report.

This was one of the key statistics – taken from the Report on the Development of Rice-Fish Integration in China: 2018 – to emerge from a workshop on the socio-economic impact of rice-fish culture, which was held at Shanghai Ocean University (SHOU) last week.

The workshop, which was supported by FAO and the Chinese government, brought together 20 international and 30 Chinese experts in this field. They discussed how rice-fish farming can reduce poverty, improve nutrition, contribute to traditional art and culture, and promote gender equality.

Rice-fish culture can refer to many aquatic species that are cultured in rice paddies – either simultaneously or alternately – and in China it covers a wide range of species.

“It really depends on the climate – in the south we generally have species such loach, crabs and shrimp, while in the north it tends to be common carp. But increasingly innovative techniques are being used. Helped by the improved availability of quality seed, different species, including crayfish are now being produced in these systems too,” explains Dr Yuan Xinhua, senior aquaculture officer at FAO.

“2 million hectares of China currently practice rich-fish culture, a figure that’s grown by about 11 percent in the last year,” he adds.

Farmers who have practiced this technique have reported that keeping fish in their paddies increased rice yields by up to 10 per cent - with the fish controlling a number of insects that could damage the rice crops as well as helping to fertilise the plants with their faeces.

They also give the farmers an additional source of food and income. In many poor rural communities the addition of fish to their diets provides a rich source of essential macro and micronutrients, allowing for healthy growth and development of individuals who previously suffered from the coexistence of undernourishment and undernutrition.

However, Dr Yuan is quick to stress that, while there’s still huge potential for the system to continue to grow – both in China and beyond – it cannot be universally promoted and is best suited to particular parts of the 113 countries devoted to rice culture globally.

“In China we’re focusing on mountain areas, where the rice is grown in small terraces that are not suitable for using large machinery,” he explains. “So our main focus is on traditional farmers in regions such as Yunnan, Guizhou and Sichuan.”

“In Vietnam, on the other hand, we’re mainly looking at farms in the Mekong Delta, where the annual flooding makes them suitable for rice-fish production,” he adds.

In some countries – such as Myanmar – the rice lobby has traditionally been against any industry that threatens its hegemony (both cultural and economic) and Dr Yuan is keen to point out that he’s not trying to disrupt national and regional policies that relate to rice or aquaculture production.

“We’re not challenging national agriculture/land use policies and don’t want to reduce the areas of rice paddies. We are demonstrating positive social impact to policy makers by sharing success cases worldwide,” he emphasises.

And there’s hope that even Myanmar will start to embrace the concept.

“WorldFish has now secured an agreement to launch a pilot project in Myanmar and they are now able to finally demonstrate how aquaculture is not a threat to rice production, but can actually improve the yields,” says Dr Yuan.

He also points to a project in Indonesia in which tilapia, shrimp and pangasius are all being cultured in rice fields.

Studies in Thailand have indicated that the introduction of fish into rice farms has contributed significantly to the nutrition adequacy of the farming communities as a social benefit, highlighting the contribution of omega-3 fatty acids contained in the fish to the health of pregnant women and normal neurodevelopment and visual function in infants.

The symposium revealed a raft of socio-economic benefits from around the world – the integration of loach to Hani terraces has lifted thousands of families from poverty; villagers in Indonesia and Laos now have more balanced diets; the system has helped to control malaria in Madagascar and Uganda; and has revitalised traditional culture and arts. As well as revitalising traditions, there has also been considerable progress in the rice-fish system itself.

“Innovative practices of integrating rice and fish farming implemented by small-scale farmers have led to much success lately, as farmers are cooperatively organised and have access to better fish seed and technical guidance. Rice production is becoming more environmentally friendly with fish as a bio-indicator, and much progress has been made in reaching farmers through farmer field school approaches,” says Dr Yuan.

The system has provided opportunities for farmers to charge premium prices for the multifunctional goods and services through branding of rice-fish products and agro-ecotourism, following the recognition that rice-fish systems have been given by the Globally Important Agricultural Heritage Systems (GIAHS). This describes them as an ingenious cultural practice that has the potential to generate economic and social benefits for local communities through enhanced ecological functions and provision of multiple goods and services.

Some areas have been farming in these ways for centuries, but – more recently – these regions are beginning to promote the benefits of the technique more widely and it’s paying off.

“In the village of Qingtian, in China’s Zhejiang province, people started farming like this 1,300 years ago, but they are now promoting it very well and their GIAHS rice now fetches 10 yuan per kilo, which is over three times the price of normal rice,” says Dr Yuan.

It’s also bringing in tourists to the region, thus producing wider benefits to the local community

“Agro-tourism is becoming increasingly popular in rice-fish regions and means that there are now many family hotels in the village – it’s a way of adding more value to agriculture,” says Dr Yuan.

The Shanghai event was one of two major FAO-backed rice-fish initiatives last year. The other – held in Montpellier in August – focused more on the technical, rather than social, benefits of rice-fish production. As a result, in 2019, FAO plans to combine the momentum of both aspects into a follow-up event – most likely taking place in China in October, which is harvest season for rice.

Meanwhile they will be looking to ways to scale up the initiative across suitable parts of Asia, Latin America and Africa.

“The biggest challenge to scaling up is getting financial support – ideally from local and national governments,” explains Dr Yuan.

And, thankfully, the concept is gaining credibility more widely – the Ecuadorian government, says Dr Yuan, has requested the FAO to help launch a pilot scale project there too.

“We now need to improve awareness of the system – especially explain its social benefits; try to provide evidence so people can understand its benefits – both for the farmers and the villages; try to invite government agencies, researchers and farmers to share their knowledge and experiences; and finally try to produce best practice guidelines for rice-fish farmers,” Dr Yuan concludes. 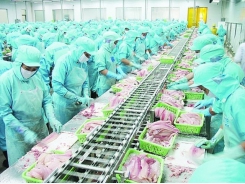 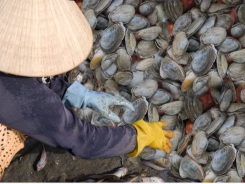 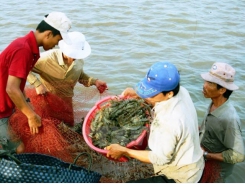