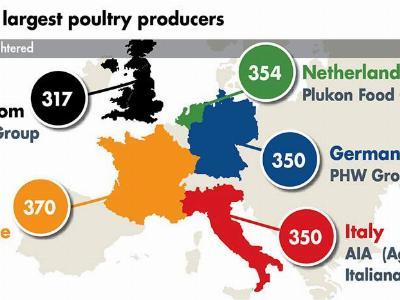 Despite its overall sluggish economy, Europe remains a major, and expanding, producer of poultry meat.

The outlook for European producers remains positive, with favorable prices for feed and high competitor protein prices, and the region’s economy is continuing to grow, albeit slowly.

So which companies lead the rankings of the World Top Poultry Companies when compared with their competitors?

LDC is Europe’s largest poultry producer. Based in France, the company also has activities in Spain and Poland.

In late 2014, LDC acquired the Glon broiler assets from Sofiprotéol (Avril Group), including five production sites in Britanny with a workforce of nearly 1,000, and announced that the company would be renamed Bretonne Poultry. The deal also included a production site in central France.

The company completed the purchase of Stolle in January 2012 and then merged with InterChicken of the Netherlands in 2013. In April 2015, it was announced that Plukon's sole shareholder, Gilde, would create a consortium of owners consisting of Gilde, De Heus, Agrifirm, EW Group and Plukon's management.

PHW Group is comprised of more than 40 medium-size companies, including Poland's Drobimex, and has more than doubled its number of employees in the past decade.

AIA – Agricola Italiana Alimentare, a member of Grupo Veronesi – is Italy’s largest poultry producer. To produce its 350 million birds, it uses a pool of livestock farms, comprising about 1,500 breeders and eight production facilities producing around half a million tons of chicken and turkey meat annually.

The company also produces more than 1 billion eggs each year.

2 Sisters Food Group, one of the U.K.’s largest food producers, supplies about one-third of all poultry products consumed in the country, and slaughters 317 million birds annually.

In 2011, the company acquired Northern Foods, and this was followed by the acquisition of Vion’s U.K. poultry and red meat processing operations in 2013.

In early 2014, the company announced a multi-million-pound expansion at its processing plant near Glasgow, Scotland. 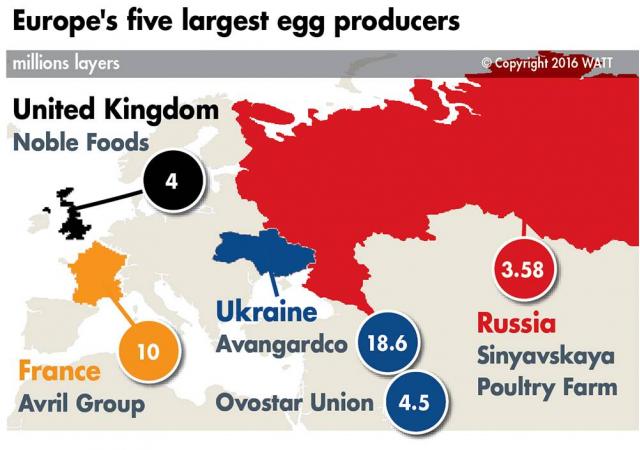 Europe ranks as the world’s second largest region where egg production is concerned. Of the 20 largest egg-producing countries in the world in 2013, almost half were European.

According to the latest edition of World Top Poultry Companies, in 2014, the following egg businesses stood out from the competition by being the five largest egg producers in Europe.

Unrest in Ukraine has disrupted the company’s egg production, resulting in the closure of some its operations in the eastern part of the country. Consequently, its layer flock was reduced by approximately 30 percent. The company’s profitability has also been hit by a devalued currency.

Ukraine’s Ovostar Union is one of the country’s leading agroindustrial companies and a leading Ukrainian egg producer with the brands Ovostar (egg products) and Yasensvit (table eggs).

In 2014, Ovostar produced more than 1 billion eggs, a 16 percent increase over 2013, and processed 730 million eggs, maintaining a market share of 8 percent for eggs and 90 percent for egg products. The company has a layer flock of 4.5 million birds.

With a 4 million-bird flock, the U.K.’s Noble Foods is owner of the Happy Egg brand, the largest table egg brand in the U.K. The company also has a growing presence in the U.S.

Noble delivers 72 million eggs weekly, sourced from its own farms as well as contracted farms and packed in one of two facilities. Additional brands include One Good Egg and Eggs for Soldiers. 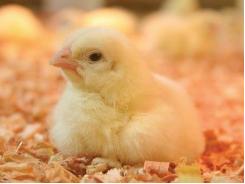 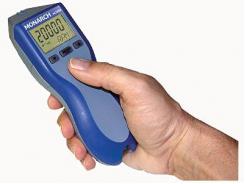 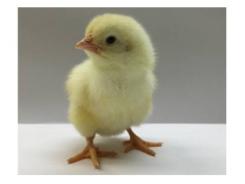 The value of digestible calcium specifications

Overheating in incubation and its impact on broiler…