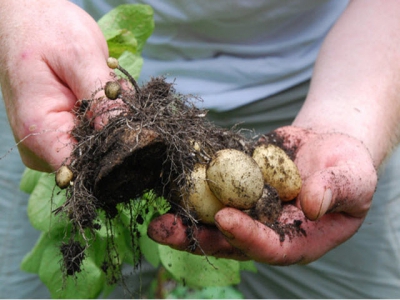 Potatoes are hardly worth growing in a small garden unless you can concentrate on early varieties to provide ‘new’ potatoes or on good-quality unusual varieties that are rarely available in the shops. Of the unusual varieties only ‘Pink Fir Apple’ seems to be offered from time to time. Its pink-skinned tubers are often strangely shaped, but they retain their quality as ‘new’ potatoes well into the winter, when ‘new’ varieties in the shops are either very expensive or unobtainable. It is excellent when eaten hot and buttered or cold with salads. As it is a maincrop variety, it needs more space to grow than the earlies.

Potatoes are grown from selected small tubers known as ‘seed’ potatoes; make sure you buy only those certified as virus-free. The tubers must then be ‘chitted’ — that is, allowed to sprout from ‘eyes’ at the end opposite the point of attachment to the parent plant — before they are sown. For this purpose place your seed potatoes close together and with ‘eye’ ends upwards, in tomato boxes, seed or egg frays, or other suitable containers. Early varieties of seed potatoes should be bought in the autumn and kept at a temperature of about 18°C (66°F) until one or two sprouts have just started to develop on each tuber; then they should be stored at about 7°C (40°F) until the spring. Finally, about a week before planting, put them in a warm, light place so that they will produce good sprouts. Alternatively, store the ear-lies at 7-10°C (40-50°F), then rub out all but two or three sprouts on each tuber before planting. Maincrop seed potatoes should also be stored at 710°C (40-50°F) until planting time; do not rub off any of the sprouts on these later varieties.

The soil must have been well dug the previous autumn, with plenty of compost thoroughly mixed in. The site should if possible be sheltered to minimise the effects of frost. The earlies are planted in March and the maincrop at the end of April. Take out a trench about 150 mm (6 in) wide and deep. Plant the earlies 300 mm (12 in) apart, and the maincrop 400 mm (16 in) apart. If you plant more than one row the trenches should be 600 mm (24 in) apart for the earlies and 750 mm (30 in) for the maincrop. After covering the tubers with soil, rake in a general fertiliser.

Two alternative methods may now be used for growing potatoes: covering the soil with black polythene sheet, or earthing up. In the first, the polythene sheet over each row of earlies must be at least 600 nun (24 in) wide and over each maincrop row at least 750 mm (30 in). Bury the edges of the sheet at sides and ends with soil weighted with heavy stones. When the potatoes start to sprout and just as the sprouts emerge from the soil after a few weeks, cut a slit in the sheet immediately above each so that the plants can grow through. Too much light will cause the development of green tubers and possibly poisonous, so heap peat around the slits and plant stems.

To earth up your potatoes draw up soil from between the rows with a hoe or rake when the plant shoots are 150-200 mm (6-8 in) tall. The idea is to build up a ridge along the row, leaving the top 75-90 mm (3-31/2 in) of each shoot exposed. Raise the height of the ridge every week or 10 days, always ensuring that about half the total height of the stem remains above the top until the ridge is about 150 mm (6 in) high. Keep the ridge moist: it tends to dry out quicker than the surrounding soil.

If you have no space for growing potatoes, even just early ones in the main plot, you can raise some in large pots, plastic buckets, or tubs (if using buckets, however, you must drill drainage holes in the bottom). A bucket-sized container will take two seed potatoes; the largest will take up to 9 or 10. The growing medium should be a John trines or soil-less compost, or well-broken-down garden soil enriched with garden compost and with a sprinkling of general fertiliser. Plant the seed potatoes in March. Keep the soil moist but not wet; shelter or cover the containers in very rainy weather, but uncover them again as soon as possible. Protect the plants against night frost by covering the containers with old sacks, curtains, or anything else suitable. Earth up the plants with John Innes No. 3 or an equivalent soil-less compost.

Harvesting of new potatoes usually begins in June. For the earliest ones of all, remove a little soil carefully from around the plants (or lift the polythene), select the largest potatoes, and re-cover the remainder to grow on and be cropped in a similar fashion. Later, in July, the plants may be lifted by carefully forking them up — but be careful not to damage the tubers with the tines of the fork. Potatoes not required for immediate use should be dried and stored. Maincrop ‘Pink Fir Apple’ will be ready in the autumn when the foliage dies down. Lift them as above, dry them well, and store them in the dark in boxes in a cool but frost-free place. Earlies grown in containers will be ready slightly before those in the main plot — probably from late May. After you have harvested all the tubers, the compost and containers can be used for growing radishes, carrots, or lettuce.

The commonest potato pest is wireworm, which bores holes into the tubers; it is especially likely to cause trouble on newly cultivated ground. Bromophos will give some control. Eelworm, another nuisance, does not usually cause trouble if your crops are correctly rotated. Two fungal diseases, scab and blight, may also occur. Scab forms raised patches and spots on the tubers but does not otherwise affect their quality. It is commonest in alkaline soils, for which scab-resistant varieties are available. Blight, on the other hand, can ruin your crop. The visible signs are on the leaves which develop brownish yellow patches in dry weather and shrivel, or become covered on the undersides with white threads in wetter conditions. Blight attacks the tubers, their skins developing greyish patches and the flesh reddish brown. When growing potatoes, all the affected tubers, stems, and leaves should be lifted and burnt as soon as the symptoms appear.

Fungicides such as Bordeaux mixture, maneb, or zineb will help to prevent blight.

Arran Pilot, a white kidney-shaped potato which can be dug early or left in the ground to become a second early.

Home Guard, much grown because it is resistant to wart disease. A heavy-cropping, oval-shaped tuber.

Ben Lomond, tubers are of a soapy as distinct from floury texture; oval and of a good shape.

King Edward VII, a very popular potato, but not a heavy cropper, unless the soil is loamy and peaty. Smooth white skin with pink splashes.

Majestic, an enormous cropper, large kidney-shaped tubers, but rather soapy. 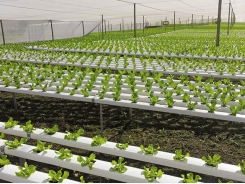 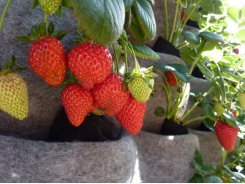 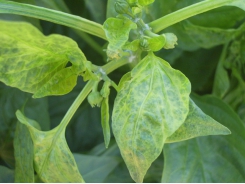