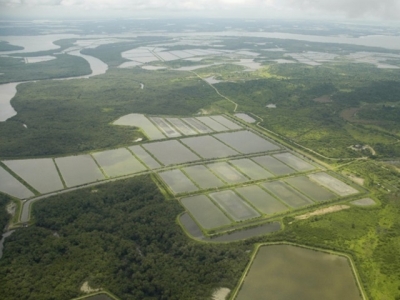 Shrimp farming began in Ecuador almost 50 years ago in a casual manner. The first shrimp farms were established in the southern part of the country and, since then, almost 220,000 hectares of production ponds have been developed, which today are part of an industry that is the first source of non-oil-related foreign income in the country.

Little was known in the 1970s about shrimp farming, but through sheer will and mostly by trial and error, shrimp farmers overcame their operational and commercial limitations. The lack of scientific knowledge and initial production methodologies did not prevent Ecuadorian producers from converting the country into one of the world’s main suppliers of farmed shrimp. In the first 15 years nearly 90,000 hectares of shrimp farms were built, and by 1995 almost 180,000 hectares were in operation.

Despite its casual origins, development has not been the result of improvisation. A long and sometimes painful journey has taken place to establish an industry following its own path, which has been differentiated by its open, low-density farming systems, and by using disease-resistant animals instead of the intensive systems and pathogen-free genetic lines that mostly characterize shrimp farming elsewhere.

From the first farmed shrimp crops until 1998, the country’s production had been growing more or less continuously and reaching nearly 115,000 metric tons (MT) in 1998, with some temporary drops due to problems caused by diseases such as the so-called “gull syndrome” in 1989 (caused mainly by Vibrios) and by the Taura Syndrome (TSV) in 1994. The story takes a negative turn in the year 2000, when, with the arrival of the White Spot Virus (WSSV), exports fell to 37,700 MT and the industry suffered a contraction of 70 percent in the midst of an acute economic crisis and the change of the national currency (Sucre) to the U.S. dollar. 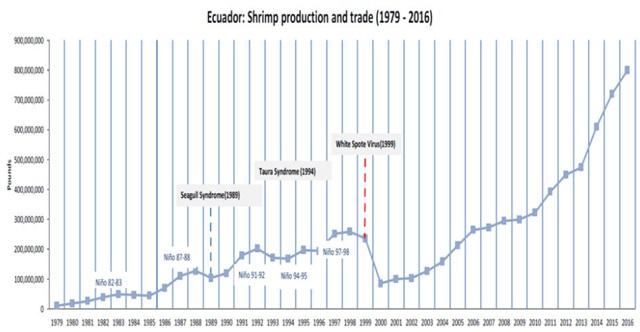 Given the high mortalities during production, the breeding centers doing broodstock maturation began to use pond animals that survived the viruses and from these animals they developed the new generations that were then taken to the grow-out ponds to produce the new crops, repeating the process over and over. This mass selection based on shrimp resistance to the diseases progressively gave way to the production of animals with better survivals in the farms, and in 2006 the industry was able to recover to production levels prior to the onset of WSSV.

In the last decade, the industry has experienced production and price increases, increased regulations and improved environmental stewardship. Starting in 2007, Ecuador has maintained a steady annual growth rate of approximately 12 percent, achieving exports of 246,000 MT in 2017, tripling exports and becoming the main producer of farmed shrimp in the continent, accounting for more than 50 percent of the production of the Americas region.

Table 1: Shrimp exports from Ecuador and the rest of Latin America. Data for 2017 from GOAL 2017.

So how has Ecuador achieved this production recovery and growth? There are a series of factors that have contributed to its success.

In the 1980s, local university centers strengthened their aquaculture training programs or created new careers related to the area. In 1985, the Littoral Polytechnic School (ESPOL) opened an aquaculture degree (now an engineering one) where numerous promotions of technicians and researchers were formed. And in 1990, thanks to an agreement with the government of Japan, the National Center for Aquaculture and Marine Research (CENAIM) was created, where research related to the shrimp industry is conducted. Other universities also created careers or modified curricula to incorporate aquaculture-related topics and to train professionals who could face the challenges of a developing industry.

Ecuador has also become a country that exports its professionals to places where shrimp is farmed, such as Brazil, Mexico, Indonesia, Thailand, Saudi Arabia, China, India and other leading producers. Numerous Ecuadorian professionals work in shrimp farms around the world, or provide advice as consultants or advisors.

Initially, the shrimp industry relied on wild shrimp seed to stock its production ponds. In the early 1980s, the first postlarvae (PL) production laboratories – or hatcheries – were built. The Semacua hatchery, the first such facility to commercially produce shrimp PLs in Ecuador, began operations in 1981 and subsequently built other laboratories, including that of ESPOL, which, in addition to training professionals in aquaculture, supplied PLs to some shrimp farming companies.

Until the late 1990s, these hatcheries mainly supplied PLs to large shrimp farming groups, which required a constant supply of seed in large quantities. The PLs came mainly from gravid females captured in the sea and spawned under controlled conditions (wild nauplii); broodstock maturation programs were not yet considered a priority. The remaining farms preferred to stock up on wild seed because they achieved better yields and survivals.

It was not until the end of the 1990s that most shrimp companies began to source seed from laboratories. The capture of wild PLs from the natural environment for stocking farm ponds was prohibited in 2002, forcing the industry to produce its own seed and creating the need to implement programs for the maintenance of broodstock, which led to the development of genetic improvement programs. At present, the industry is exclusively supplied with PLs produced using broodstock animals from genetic improvement programs and the capture of gravid females for seed production is prohibited in the country.

Implementation of the National Control Plan

In 2005, shrimp production in Ecuador increased almost 35 percent over the previous year and exports to Europe totaled 45 percent of total production (over 43,000 MT). In that year, a technical mission visited the country to audit the food quality and food safety assurance systems for shrimp and fish exported to the European Union, and produced various observations that endangered the entry of our products into that major market.

Consequently, the national authority implemented a series of regulations, standardized with EU sanitary regulations, to certify the quality of the exported shrimp and to ensure traceability throughout the entire commercial chain. These requirements, established in what until today is still called the National Control Plan, have allowed Ecuadorian shrimp to meet those quality standards and to achieve access in demanding markets.

With the regulations the Ecuadorean shrimp industry complies with – which require quality controls and traceability from the source – Ecuador can continue to enter the U.S. shrimp market without any issues. The Seafood Import Monitoring Program (SIMP) does not represent a threat to the exports of Ecuador’s shrimp since all export companies are under the National Control Plan, and therefore have a traceability program.

Representation of the industry through the National Chamber of Aquaculture

Unlike other shrimp producing countries where there are different organizations that represent one or more phases of the production and commercial chain, Ecuador has had a National Chamber of Aquaculture (CNA) since 1993. This organization represents the entire industry and brings together companies dedicated to the production of PLs, shrimp farms, suppliers of machinery and supplies, feed mills, processing plants and exporters. Any topics of general interest to the industry or any of its sectors are first handled within the CNA and then taken to the authorities or relevant bodies to propose regulations or defend the industry against commercial threats, emerging diseases, economic problems, etc.

The CNA has taken on challenges such as the defense of the industry against the antidumping measures taken by the United States in 2004, the request to implement a sanitary barrier to prevent the entry of emerging diseases (AHPND) in 2013 and the campaigns that promote  Ecuadorian shrimp and called “The Best Shrimp in the World” and “Ecuador First Class Shrimp.”

CNA, together with the most important producing companies in the country, is leading an initiative called the Shrimp Sustainable Partnership (SSP), which seeks to establish a new certification standard that guarantees the absence of antibiotics throughout the shrimp production chain, the neutral impact on water used for production, and social and environmental sustainability. 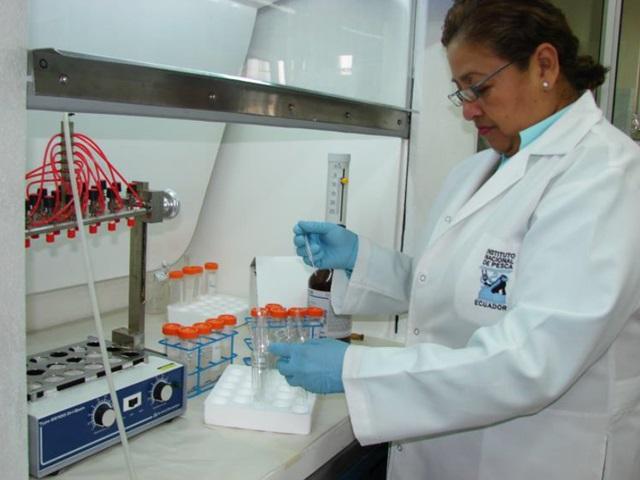 Processes for legalization of operation permits and mangrove reforestation

Since 2007, after the National Control Plan came into effect and because, due to environmental regulations, numerous farms established in coastal areas owned by the state did not have the corresponding permits, the industry requested that mechanisms be established so that the shrimp farms located in beach and bay areas could have access to the corresponding operating permits.

For this reason, in 2008 a legalization/regularization program was implemented for those shrimp farms – especially for the small and medium producers – established before 1995 that did not have the corresponding ministerial agreements. Among the requirements for regularization was the obligation to reforest mangrove areas, which, depending on the extent of the farm, could reach 30 percent of a farm’s operational area. This initiative led to about 1,200 productive units formalizing their activities and being incorporated into the records of the health authority, guaranteeing the traceability of their products and offering greater assurances to their export markets. 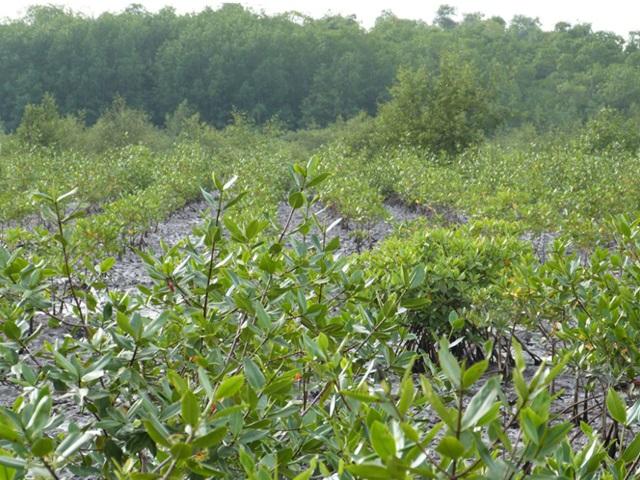 Mangrove reforestation plans have led to the recovery of about 4,500 hectares of mangrove forests.

Additionally, as reported by the Ministry of the Environment (Oficio Nro. MAE-SGMC-2018-0355-O, on April 3, 2018), about 4,500 hectares of mangrove forests have been recovered in the process, and the reforestation plans are monitored by the environmental authority. To date, no other national program for mangrove reforestation has recovered a larger area of mangroves.

Implementation of sanitary barriers to prevent the entry of emerging diseases

As a result of the problems reported in Asia by Early Mortality Syndrome (EMS) in 2012, and with the shrimp mortalities presented in Mexico, the Ecuadorian shrimp industry requested its government to take measures to prevent the introduction of the deadly disease to the country, until then of unknown origin and without treatment once established. 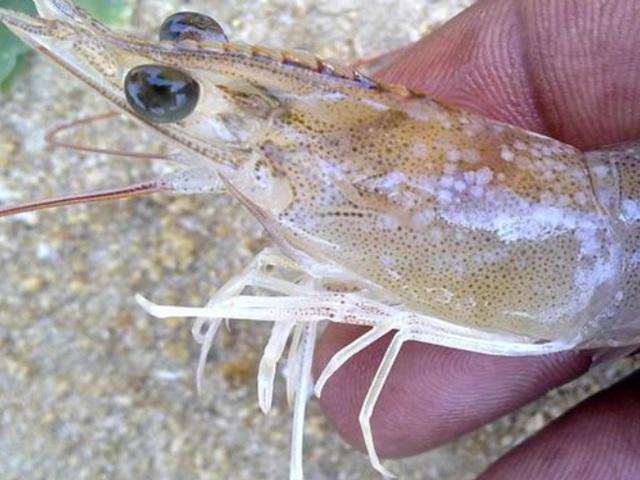 After numerous meetings and consultations with experts, the national authority implemented a sanitary barrier that prohibited the importation of shrimp in any of its development phases and products, and restricted the entry of certain inputs from countries where the disease had been declared or where there were atypical mortalities. The importation of products is subject to approval based on the recommendations of a commission that evaluates the risks of such imports, and is made up of representatives of the aquaculture authority, the industry and the academy.

Once the causal agent of the pathology was identified, now defined as acute necrosis of the hepatopancreas (AHPND) – as well as possible mechanisms of infection and diagnostic mechanisms – the sanitary barrier has been modified, although import restrictions are maintained for live shrimp. This has allowed the country to stay away from emerging diseases and to be able to, together with technological investments, increase production levels in a sustained manner. 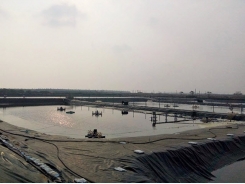 What is a “biofloc" System? 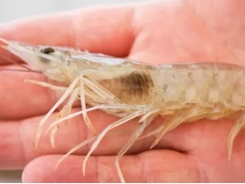