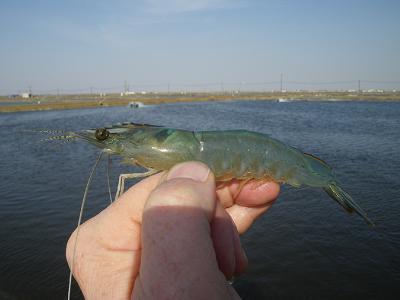 The shrimp farming industry in the Kingdom of Saudi Arabia started and was based for many years on the Indian white shrimp (Fenneropenaeus indicus); note semi-intensive ponds in the background. Photo by Herve Lucien-Brun.

The shrimp farming industry in the Kingdom of Saudi Arabia (KSA) was started in 1995 with the culture of the Indian white shrimp (Fenneropenaeus indicus) grown under semi-intensive production conditions. The positive results obtained with this species in terms of growth rate, survival and flesh quality led to its commercialization as a premium shrimp in the international markets. The two regions where the shrimp farming industry developed in the KSA are located on the Red Sea shores, in Jizan in the south and in Al-lith in the north (Fig. 1). Both regions have excellent water quality and have optimal environments for shrimp farming. 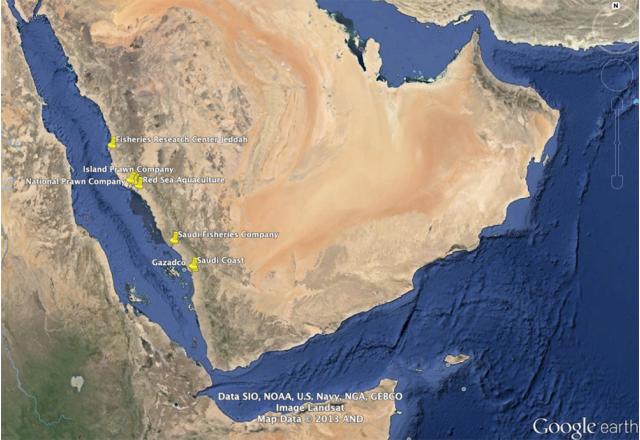 Fig. 1: Locations of shrimp farming facilities in the Kingdom of Saudi Arabia.

During the winters of 2010-2011, 2011-2012 and 2013-2014, the KSA shrimp farms faced a white spot syndrome virus (WSSV) outbreak that caused high mortalities in growout ponds, significantly affecting the overall shrimp production. The combination of three factors – including low water temperatures, a susceptible shrimp species (F. indicus) and the presence of the virus in the wild populations caused the WSSV outbreak. The marine currents in the Red Sea flow from south to north during winter.  The flow of the currents explains, in part, the evolution of the initial WSSV outbreaks in shrimp farms in the south, which then spread to farms in the north area in a two-month period (Fig. 2). 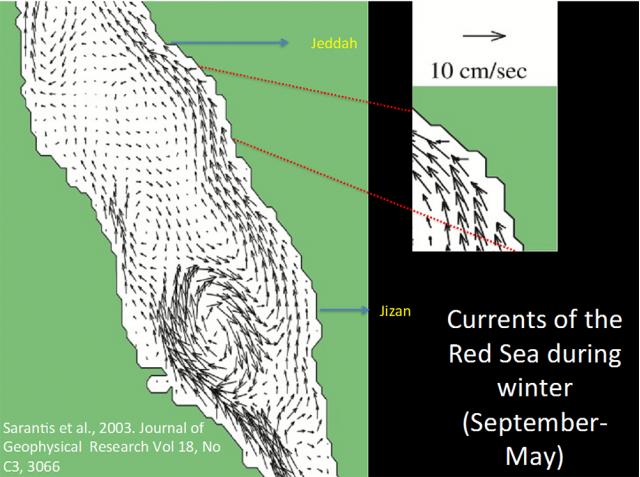 In 2011, the Aquaculture Department of the Ministry of Agriculture (ADMA), along with the private shrimp industry started implementing a biosecurity strategy to initially determine the potential causes of the WSSV outbreak, and also the potential solutions to minimize the effect of the disease. Biosecurity in general encompasses a host of actions to protect living organisms through the exclusion of pathogens that cause diseases of bacterial, viral and other origins. More specifically for shrimp, it involves addressing various aspects from the global, national and regional levels, all the way to specific hatcheries, farms and processing facilities.

An effective biosecurity protocol must be designed and implemented, incorporating an understanding of the specific pathogens and their vectors, what factors can exacerbate the magnitude of disease outbreaks, and others. In principle, the main objective of a biosecurity program is to prevent the entry of infectious pathogens to culture areas and facilities.

Action plan developed and followed during the next four years

Targeted periodic surveillance was carried out in growout ponds, broodstock stocks, and larviculture and nauplii production units to determine the evolution of the endemic diseases and the incidence of new ones. In collaboration with the University of Arizona, Aquaculture Pathology Lab, not only was WSSV detected, but also a new strain of Taura Syndrome Virus (TSV) was determined to be present in the KSA shrimp industry. To date, with continued surveillance, we have been able to determine the main pathogens present in this shrimp industry.

The Reference National Laboratory for Detection of Shrimp Diseases was developed. The detection of infected stocks is critical to break the pathogen cycle, and so we started working with the Jeddah Fisheries Research Center (JFRC) to setup up the PCR and histopathology lab. To date, the lab has successfully participated in the Proficiency “University of Arizona Ring test” for the last three years.

Addressing chronically infected broodstock is paramount. One of the main risk factors detected in the shrimp industry was the fact that there was not SPF animals for the Indian white shrimp (F. indicus). At the beginning of the process, we realized that the broodstock were bred in outdoor ponds exposed directly to the marine environment. Under these conditions, it was not possible to ensure the virus-free status of the stocks, and as a consequences WSSV outbreaks continued to occur during the winter months.

Because of the positive results with this introduced species of shrimp, ADMA along with the SAS decided to import the first batch of SPF P. vannamei to a quarantine facility. There, exhaustive analyses – including cold challenge, cohabitation, and feeding trials – were conducted. Samples were sent to the reference lab at the University of Arizona, and the results were negative for all the OIE/USMSFP listed pathogens of shrimp.

Based on these results, the first trials of P. vannamei, under the KSA environmental conditions, were carried out. The results were so positive in terms of health status and production, that in 2014 all the shrimp farmers changed culture from F. indicus to P. vannamei. In fact, the latter is the only penaeid shrimp species that can now be cultured in the KSA.

In 2014, the shrimp farms in the KSA switched from the Indian white shrimp (F. indicus, left) to the Pacific white shrimp (P. vannamei, right). Photos by Darryl Jory.

To ensure that the introduced SPF P. vannamei were not going to be affected by WSSV, new strategies were developed including indoors broodstock production facilities with proper water disinfection through ozone use. Water disinfection was implemented in growout ponds to prevent potential WSSV vectors from entering into these ponds. During the winter season, and based on the fact that WSSV was already present in the wild populations, a critical element was to protect the new P. vannamei postlarvae from the natural, WSSV-infected and cold environment. As an action plan, shrimp nurseries and a thoroughly seawater disinfection protocol, were recently introduced. 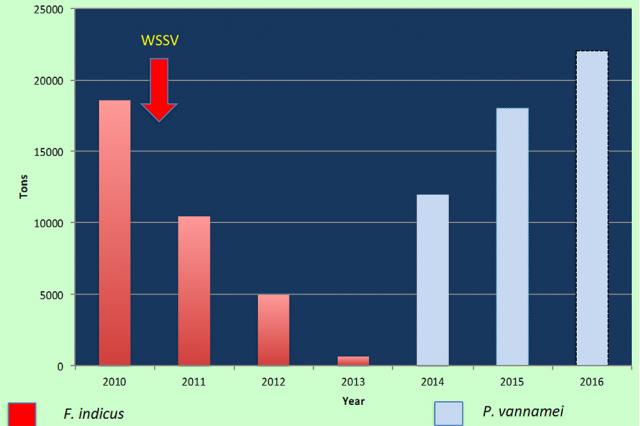 All these biosecurity strategies, including policies regarding live shrimp and commodity shrimp importation, are being compiled in a Biosecurity Manual for the Shrimp Industry in the KSA. So far, the production results of 2015 reached the historical high levels obtained in 2010 before the onset of WSSV. For 2016, the forecast is optimistic with a total expected production of around 23,000 tons (Fig. 3), which will be a record production for the country. The long-term goal is to insure the sustainability and health of the shrimp farming industry in the KSA. 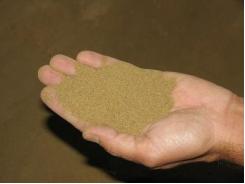 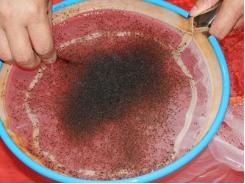 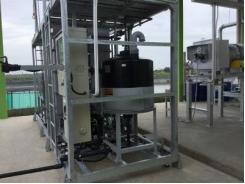