Production of fatty acid, protein by Nannochloropsis in flat-plate photobioreactors 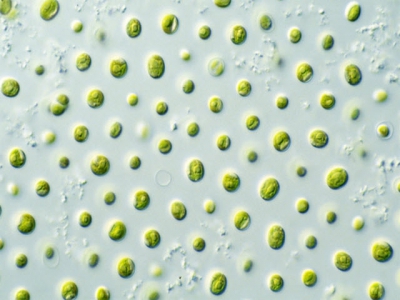 Macroalga a strong candidate for feedstocks for nutrition markets

Nannochloropsis is a genus of robust, oleaginous microalgae that synthesizes EPA during balanced growth, and is a promising candidate for commercial applications.

Sustainable, healthy diets for humans and animals may benefit from incorporating larger proportions of plant-based materials. Phototrophic microalgae are an especially promising source of alternative food and feed ingredients, because many species of microalgae are able to synthesize additional metabolites that are not available from natural terrestrial plant sources. As single-celled molecular factories, microalgae can also be cultivated on marginal land unsuitable for agriculture, using waste streams or saline water supplies.

Some species of microalgae synthesize very long chain fatty acids (carbon chains 20-plus in length), including eicosapentaenoic acid (EPA, C20:5n-3) and docosahexaenoic acid (DHA, C22:6n-3). These omega-3 fatty acids are essential components of high-quality diets for farmed fish and humans and must be available in the correct amounts.

Replacing aquafeed ingredients with single-cell oils and proteins from microalgae could reduce the environmental impacts of aquaculture, improve the nutritional quality and reduce risks from pollutants that can accumulate in marine food chains. To produce quality microalgal biomass as a whole-feed ingredient, cultivation techniques should aim to balance the lipid profile and the protein content.

An alternative and potentially more efficient approach is a biorefinery-type system where microalgal oils could be separated from the cell biomass and used as concentrated feed or food supplements. In this latter case, oil production could be maximized, nitrogen consumption minimized, and the residual biomass used for other processes including energy production.

Enclosed photobioreactors offer the highest levels of experimental control for developing optimal microalgae production systems. Photobioreactors include various designs that can be broadly grouped into tubular systems, flat plate, column and biofilm configurations. Flat-plate photobioreactors with short light path lengths are amongst the best designs, because they have high volumetric efficiency (they have a high surface area to volume ratio) and consume less energy than tubular systems.

Nannochloropsis is a genus of robust, oleaginous microalgae that synthesize EPA during balanced growth, and is a promising candidate for commercial applications. This article summarizes the original publication (https://doi.org/10.1371/journal.pone.0170440) of study that examined changes in the biochemical composition of Nannochloropsis sp. cultivated in optimized flat-plate photobioreactors as a potential feedstock for aquafeeds, and presents results on its productivity, protein content and lipid composition, including partitioning of LC-PUFAs into neutral lipids.

The microalga Nannochloropsis sp. (strain 211/78, Culture Collection of Algae and Protozoa, United Kingdom) was cultivated for eight, 12 or 16 days in high-NP and low-NP medium. Each treatment was replicated three times (n = 18 cultivations) completing a 3×2 design. Experiments were conducted in a pair of flat-plate photobioreactor systems (Fig. 1). The bioreactor light path measured 14 mm and the total cultivation volume was 400 mL. Light was provided by warm-white LEDs and a 16:8 hour light:dark photoperiod was used. 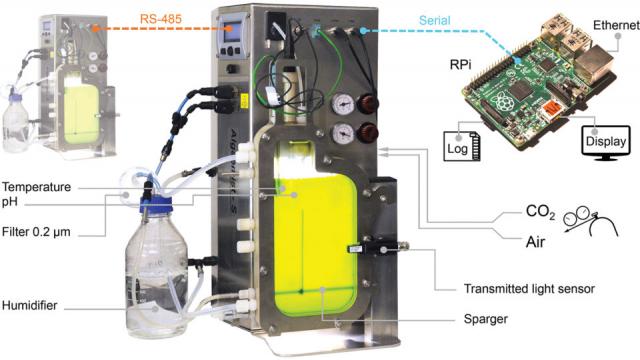 For biomass measurements, samples of cultivation broth (0.5 ± 1.5 mL) were collected daily to measure the absorbance at 540 and 680 nm using a spectrophotometer. For additional information and details on cultivation; experimental design; analyses of nitrate and lipids; calorific value; total protein; cell size; and growth curve fitting, please consult the original publication.

High cell densities and productivity are necessary for efficient industrial production of microalgal biomass. In our study, we were able to obtain a maximum dry mass of 4.7 grams per L and productivity of 0.51 grams per L per day for Nannochloropsis. Nutrient starvation induced the accumulation of total fatty acids up to 28.1 percent of the dry cell weight. 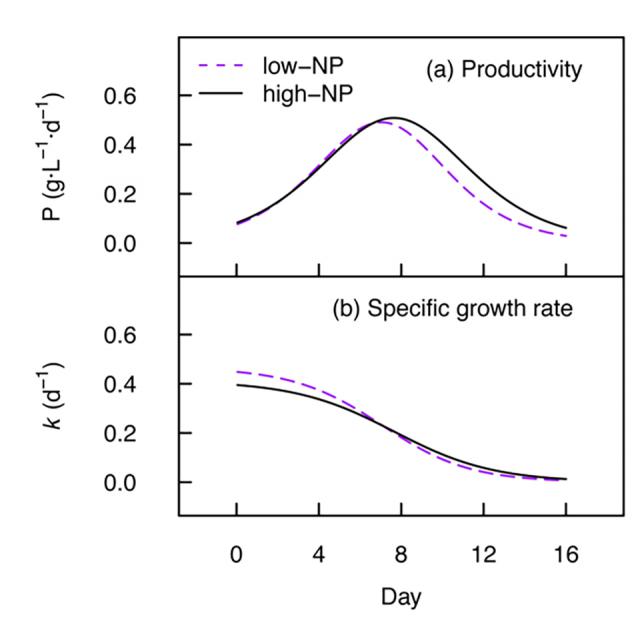 Fig. 2: Growth performance of Nannochloropsis. (a) The productivity (P) was computed from the growth curves with a one-hour timestep. (b) The specific growth rate (k) was then calculated from the biomass concentration and productivity (P) over time. Lines are the treatment means.

The omega-3:omega-6 ratio measured up to 22.9 during nutrient-replete growth, but under nutrient starvation the ratio was reduced to 3.2. High ratios are desirable for aquafeeds, but are difficult to achieve with natural crop-plants, which makes microalgae lipids potential substitutes for fish oil 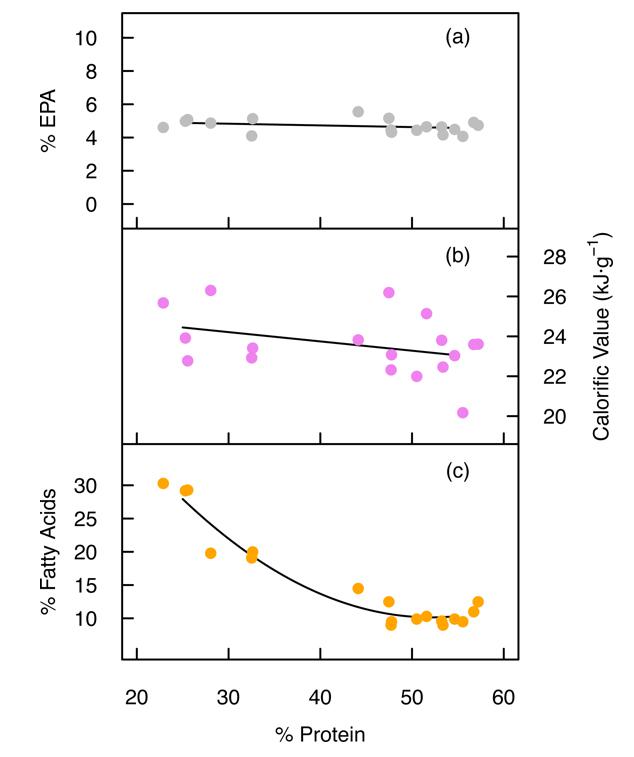 In nutrient-replete conditions, Nannochloropsis cell mass comprised 50 to 55 percent crude protein, which is a good value for a whole-cell ingredient in aquafeeds. Generally, salmonids require 36 to 38 percent digestible protein (dry-matter basis) in their diets, but this reduces to 29 percent for tilapia, an omnivorous fish.

Conventional aquafeeds have traditionally relied heavily on protein from fishmeal, but improved modern feeds substitute a large amount of fish-derived ingredients for soy protein. Our upper protein values for whole-cell Nannochloropsis during exponential growth are slightly lower than fishmeal (62 to 72 percent), but higher than whole soybean meal (44 percent), although soy protein concentrates can contain 63 percent or more protein.

Our data compares well with the freshwater microalgae Arthrospira (58 percent) and Chlorella (52 percent). Nannochloropsis has also been tested in the diets of some farmed species in feeding trials. In a trial with Atlantic cod, feeding a combination of Nannochloropsis sp. and Isochrysis sp. (28 percent inclusion) reduced feed intake and growth significantly. However, defatted biomass (the residual biomass after lipid extraction) of Nannochloropsis (up to 20 percent inclusion) was found to offer comparable growth rates to conventional aquafeeds in studies with Atlantic salmon.

The bioavailability of cell proteins and lipids may be limited when whole-cell biomass is incorporated into diets. For complete cell disintegration, it was necessary in our study to use a combination of bead milling and ultrasound. The effective recovery of metabolites and the bioavailability of cell contents should, however, be considered in industrial applications. Bead milling can consume a large amount of energy, so industrial methods for extraction of oils and proteins, for example, may need careful selection. The extraction efficiency of intracellular components also varies during the growth stage, with nitrogen depletion improving the release of intracellular components.

Photobioreactors are devices that are optimized to convert light energy into biomass energy and specific products. High light-energy conversion efficiency is vital for biofuels and will be equally important for sustainable food and feeds. Our photobioreactors are model experimental systems that use artificial LED light sources. Since photosynthesis is limited to a maximum of around 8 to 12 percent solar energy conversion, full scale production systems will need to use natural sunlight, but our lab-scale systems offer the opportunity for controlled experiments. In our simulated 16:8 hour light cycle, we obtained light conversion efficiency up to 0.70 grams biomass per mol of PAR (photosynthetically active radiation, PAR, is light of wavelengths 400 to 700 nm and is the portion of the light spectrum utilized by plants for photosynthesis) reaching the outermost surface of the broth. These values are comparable to other studies in optimized photobioreactor systems.

The major energy cost in maintaining enclosed photobioreactor systems is that embodied in the supply of power for gas exchange and mixing. The absorbance of light for photosynthesis scales with the illuminated surface area of the photobioreactor (m2), whilst the energy embodied in mixing is proportional to the reactor volume (m3). Thus, flat plate photobioreactors that have short light path lengths (high surface area to volume ratios) are the most energetically efficient production platforms.

For aquafeeds, microalgae containing sufficient omega-3 fatty acids and protein are desired. Cultivation of Nannochloropsis in nutrient-replete conditions or subject to only mild nutrient depletion maintains the necessary protein content, and probably offers the best strategy for producing a complete whole-cell biomass for nutrition applications.

Although Nannochloropsis is a strong candidate for providing algal feedstocks for nutrition markets, the biomass of several species of microalgae with complimentary fatty acid profiles might be combined together to optimize the quality of a microalgae diet. Extracting and concentrating proteins and oils from microalgae may also offer advantages for providing optimal nutrition. 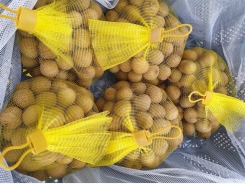 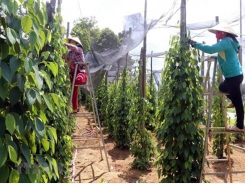 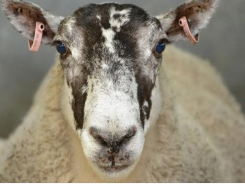