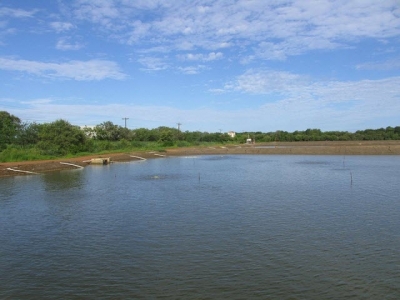 Phytoplankton populations are important components of shrimp ponds, and can be strong friends or foes depending on how they are managed. Photo by Darryl Jory.

Phytoplankton can be a dilemma in aquaculture. Properly managed populations can be very beneficial (“friend”) to aquaculture production systems, but if inadequately managed, they can proliferate out of control and can have significant negative effects (“foe”).

Many species of phytoplankton that are beneficial in shrimp and fish farming in terms of nutrition and removal of excessive nutrients (such as ammonium, nitrate and phosphate), are also responsible for a diel pH shift which influences the dynamics of ammonia and hydrogen sulfide, both of which can be highly toxic to aquacultured species.

Phytoplankton populations thus can have the dual roles of friends or foes in aquaculture systems, depending on how adequately they are managed.

Some of the desirable phytoplankton species in aquaculture production systems include Chaetoceros sp. (nordicmicroalgae.org – left) and Chlorella sp. (tradeboss.com – right).

Phytoplankton as a friend

There are many phytoplankton species that are highly nutritious to many aquacultured species, such as Chaetoceros sp., Tetraselmis sp., Isochrysis sp., Skeletonema sp., Spirulina sp. and Chlorella sp. These species are nourishing and vital to shrimp larval nutrition during the early larval stages. Many phytoplankton species also produce omega-3 fatty acids that have multiple health benefits.

For example, a Schizochytrium sp. has been cultured to harvest its high omega-3 fatty acid for human health and specialty ingredient. The Chlorophyte microalgae Haematococcus pluvialis has high levels of the valuable antioxidant astaxanthin, which is highly beneficial in all stages of shrimp farming as well as a health food for people.

Ponds dominated by Chlorella sp. and other phytoplankton species (“green water”), or ponds where diatoms predominate (“brown water”) have enhanced water quality. Green water was particularly important in the early days of shrimp farming because it can be maintained for a longer time compared to diatoms.

Phytoplankton can utilize ammonium, nitrate and phosphate, and hence reduce their concentrations in pond waters. Ammonium and nitrate are by-products of the breakdown of protein, while phosphate is present in the feed disseminated to the shrimp in the pond. If present in high concentration, they reduce water quality and can limit shrimp and fish growth.

Phytoplankton also provides shading and can limit or prevent the establishment of undesirable benthic algae species on pond bottoms. When there is significant benthic algae growth on pond bottoms, they can float in mats buoyed by the formation of gases during sunny days, and can accumulated in stagnant corners of the pond. When they sink again, they decompose and produce hydrogen sulfide, very toxic to aquacultured animals. 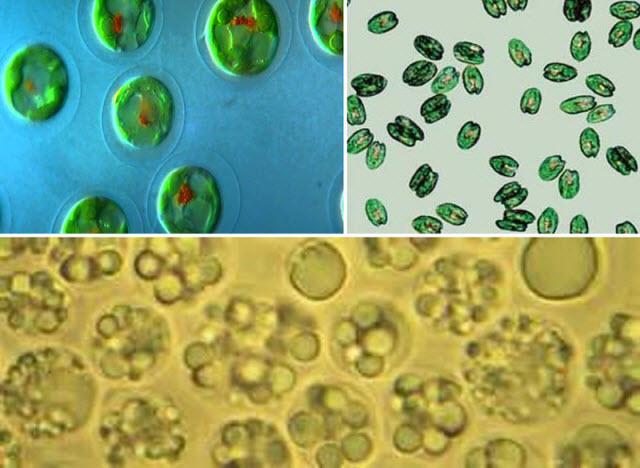 Shading is important because when the young shrimp postlarvae or fish fry are stocked into unshaded ponds, they will not be overtly stressed under the bright sun. Nowadays, when desirable and appropriate pond water color cannot be established early by the growth of natural phytoplankton populations, as is often the case with HDPE-lined or concrete ponds, an artificial commercial colorant can be added to the pond water to provide shading.

Phytoplankton species are primary autrotrophic producers that are able to produce food from their photosynthetic activity, and are the starting point of natural productivity in pond ecosystems and food chains in nature. After their populations are established, others follow, including zooplankton species which graze on phytoplankton. Both phytoplankton and zooplankton in turn are important natural food sources for the young shrimp postlarvae and fish fry stocked into the ponds.

Phytoplankton as a foe

Phytoplankton blooms, however, can have a dark side too, and can cause a number of problems if not properly managed. For example, excessive blooms can cause oxygen depletion at night and result in massive plankton and aquatic life die-offs. The excessive organic load resulting from these mass mortalities can cause significant water quality deterioration (particularly increasing dissolved oxygen demand), and strong growth of pathogenic bacterial and fungal populations that can result in a variety of diseases in aquacultured animals.

In phytoplankton dominated ponds, there is a diel pH shift. As the sun becomes brighter, photosynthesis and the resultant uptake of carbon dioxide accelerates and pH levels increase. As the sun sets, phytoplankton respiration releases carbon dioxide, resulting in the formation of carbonic acid and the lowering of the pond water pH. This diel pH shift can affect the pond water quality, as pH affects the dissociation of ammonium and hydrogen sulfide.

At pH values above 8.5 there is a higher percentage of toxic ammonia, and pH levels below 6.5 toxic hydrogen formation will occur. The degree of diurnal shift in pH values is directly affected by the phytoplankton density and concentration, and is more severe the higher these are.

Undesirable phytoplankton species and groups like Anaebaena sp. (a filamentous blue-green algae or cyanobacteria), and dinoflagellates like Gymnodinium sp. and Ceratium sp. will thrive in nutrient-rich waters. But when massive die-offs occur because of dissolved oxygen depletion in ponds, these species can release biotoxins that are harmful to shrimp and many other aquacultured species.

How to handle phytoplankton

Moderation is generally the best middle path to take in many instances, and in shrimp farming ponds, the ideal scenario is to keep the phytoplankton under control to the extent possible. This can be done in two ways.

The first option to manage phytoplankton is through an appropriate water exchange regime. One regime involves a significant water exchange (up to 20 percent daily) in ponds located where water is easily available; however, this should only be done if necessary, considering plankton density and also other pond management aspects.

Another regime is through a minimal daily exchange of up to 3-5 percent, and is done in more sophisticated, intensive production technologies like biofloc systems. The third water exchange regime is tidal, depends on local conditions, and is typical of more extensive and much older production systems like very large ponds (< 15-20 ha) located very close to the zone of tidal influence.

The second option to manage phytoplankton is implemented in areas with a limited supply of water, and where aquafarmers may manage excessive phytoplankton populations by using known algaecides such as benzalkonium chloride at 0.3 ppm and hydrogen peroxide at 2 ppm.

Phytoplankton populations are important components of shrimp ponds, and can be strong friends or foes depending of how adequately they are managed. Proper management of natural productivity in shrimp ponds is critical to promote and sustain plankton blooms, and microbial and benthic community productivity. A vigorous phytoplankton bloom will support a healthy benthic community and will contribute significantly to stabilising and maintaining adequate water quality in shrimp ponds.

This happens by promoting oxygen production by photosynthesis and by decreasing levels of various metabolites and toxic substances, by improving pond water and bottom pH (critical in ponds with acid-sulfate soils), by limiting – through shading – establishment of filamentous bottom algae, and by increasing turbidity which reduces benthic algae populations and bird predation. 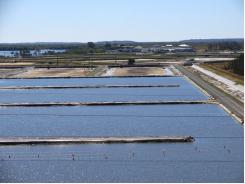 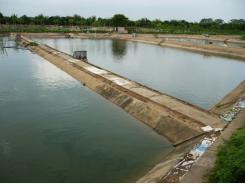 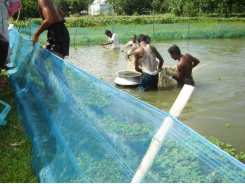 Decomposition and accumulation of organic matter in ponds