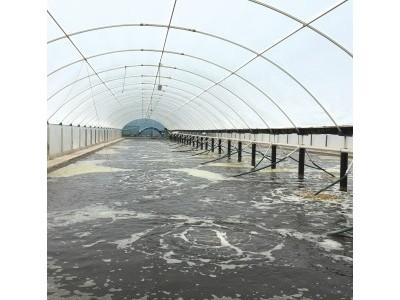 After years of significant losses with white spot syndrome virus (WSSV) outbreaks, a nursery phase is a common practice in Mexico’s Penaeus vannamei shrimp farming industry. In the last two years, more integrated groups in South and Central America have implemented a three-phase farming system with intermediary raceways/nurseries at pond site before stocking the animals into grow-out ponds, resulting in increased productivity by 20-30% and lowering production costs.

Stocking post larvae (PL) after a nursery phase (usually >PL45) instead of PL10-12 direct from hatcheries will reduce the duration in the grow-out ponds by 20-30 days and feed conversion ratio (FCR) by 10-30%. In Mexico and Asia, this is now one of the strategies used to mitigate early mortality syndrome (EMS) by stocking larger size post larvae into grow-out ponds.

The three-phase system has its benefits for the whole supply chain. Nursery systems have a constant control of water conditions and shrimp health. There is optimisaton and better feeding efficiency. The target is to produce stronger post larvae which have been acclimated to the pond environment. This results in better survival during the first days of culture and minimises exposure to disease vectors. Nursery systems allow more crop rotation in the ponds. Farmers require more post larvae and hatcheries sell more post larvae when producers have more crops.

The system also takes advantage of the compensatory growth capacity well known in the Americas with vannamei shrimp. In Mexico, growth of 7-8 g in the first 30 days was achieved with the three-phase system as compared to 3-4 g with regular stocking. The biggest cost in shrimp farming is during the grow-out stage. A shorter cycle means savings in costs for feeds and energy.

However, all of this can be achieved only with the use of proper technology and with full control of the system. In poorly constructed or managed nursery systems, low survivals may result, and weak animals are likely to be transferred to ponds.

Evolution of nursery systems in Mexico

WSSV together with local weather limitations (Mexico has extreme weather conditions, very high and low temperatures), forced farmers to modify their operational systems. In the last six years, producers have been adjusting their nursery systems to be cost efficient with higher biomass. With high stocking density, these systems require zero water exchange in order to keep all parameters constant. Prerequisites are highly efficient filtration systems, similar to those used in the hatchery. Aside from probiotics to control water quality, regular siphoning is required. The target is healthier and stronger animals before transfer to the ponds.

Control of water quality and feeding

In the case of feeding, lower quality feeds with fines will affect water quality and shrimp performance. As such, higher quality hatchery feeds with less fines are most desirable. Producers do not follow a fixed feeding table. Usually, at least 45% crude protein and high energy feeds are fed at 2-hour intervals. Feed amounts are adjusted depending on feed trays, water quality and animal growth.

The main bottleneck in the adoption of nursery systems is the implementation of the right transfer technique. Attention is placed on the transfers of post larvae to grow-out ponds. The early transfer techniques had adversely affected survival rates. For short distance transfers to adjacent ponds, 2 kg of small animals of 0.4 to 1g each, were placed in 20 kg sized buckets filled with water saturated with oxygen. The maximum transport time was 5 minutes and mortalities during transportation ranged from 5 to 10%. For longer distances, 75 to 180 animals/litre or 20 to 40 kg of post larvae were transported in 1000 to 2000-litre tanks again in water saturated with oxygen; in such transport conditions, mortality during transport also ranged from 5 to 10%. The degree of early mortality in ponds is directly related to the condition of the animal at time of transfer and stress level during transfer.

Since 2012, modifications in transfer technology led to the use of pumps for more efficient transfers. This reduces stress and mortality during transfers to only 3-5%. The transfer process has been refined such that the animal does not stay out of the water longer than 30-60 seconds. In 2013, the maximum distance for transfers with pumps was to ponds located up to 3 km from the raceway units. The transfer capacity with pumps is 15 kg per minute.

Early transfer affects survival rates in the pond and it is important that transfers are carried out in the morning, late evening or at night. When planning for the transfer, the health condition of the shrimp should be monitored.

A recent development in Mexico is to reduce stocking density to achieve higher weight of post larvae as well as higher survival rates in the raceways. Biomass of 6.9 kg/m3 has been achieved. The average results of weight and survival rate achieved, depending on stocking densities and days in raceways, are shown in Table 1.

Beyond EMS and nursery systems

The impact of the EMS/AHPND in Mexico has been severe. Production dropped 60% in 2013 which was very similar to that in Thailand. More problems than normal were attributed to post larvae sources. Some large groups took advantage of their large raceways infrastructure, and changed the production strategy by lowering stocking densities and prolonging the days of culture in the raceways for larger post larvae for stocking. The grow-out cycle in the ponds was further shortened by harvesting smaller shrimp. This became a viable alternative for the Mexican industry, with current shrimp prices and more short cycles with better FCR and a different cost structure.

These experiences from Mexico were successfully transferred to a Malaysian farm in 2013-2014. Post larvae were stocked in raceways for 25-30 days to produce 1-1.5 g post larvae. These were then stocked into grow-out ponds at a density of 70-80 PL/m2. FCR in the raceway was 1.0-1.5 depending on the duration of culture. In the grow-out ponds, shrimp grew to 17-18 g and FCR was 1.3. Survival in the grow-out pond was 90-95%. There is still room for improvement such as adjusting feeding regimes, probiotics protocols, and temperature conditions in order to achieve larger post larvae in the nursery phase and better FCR’s in the grow-out ponds.

In Thailand, there were mixed results. There was success at the nursery stage but due to the health condition of the animal during transfer, results were poor in the grow-out stage. Alternative ideas were put in place such as stocking in cages inside the ponds for the first 30 days with no soil contact. This reportedly avoided an EMS outbreak. Another option was separating 20 to 30% of the pond with a net and stocking in this area and releasing shrimp into the whole pond after 20 to 30 days. However with these practices compensatory growth does not happen since the shrimp are in the same pond.

In Vietnam, the implementation of nursery systems was hampered by low investment and technology as well as poor biosecurity. One success was reported in central Vietnam but poor animal condition at transfer to ponds did not give good results in grow-out ponds. Poor animal condition was attributed to poor water quality from the use of sub-optimal feeds in the nursery stage.

In challenging times with the presence of new diseases and adverse environmental conditions, the industry needs to change and use new tools. Since the causative agent of EMS/AHPND is a Vibrio, nursery systems allow farmers to focus on controlling the Vibrio bacteria in a smaller area and delaying exposure to the pathogenic agent.

Farmers in Asia should use this opportunity to invest in and use the proven new technology appropriate for their unique situations. Rather than reinventing the wheel, producers should adopt the Latin American methodology and refine it for Asia. In this way, we can move away from artisanal to more controlled sustainable shrimp farming. The benefits of the implementation of the three-phase shrimp farming also go beyond EMS/AHPND. It improves productivity and reduces costs without additional pressure in the production systems.

Today, prices have come down sooner than expected but still at a reasonable level. The two biggest costs in shrimp farms are feed and duration of culture. The implementation of these systems has a significant direct impact in both parameters and therefore will help farmers to reduce risk and improve their profitability. 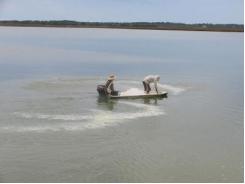 Liming and its Principles in Aquaculture 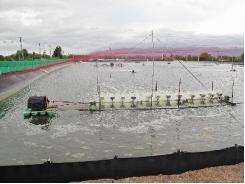 Aeration with pond capacity, Importance of Aeration and Total oxygen budget in pond 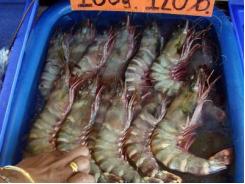