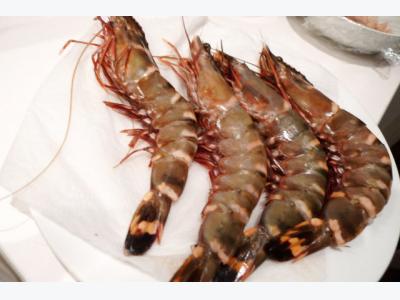 India's production of vannamei shrimp is likely to drop in 2015, as farmers face disease issues and consider a shift to producing black tiger instead, the head of a farming association told Undercurrent News.

'Running mortality syndrome', or RMS, is a problem currently faced by producers across Tamil Nadu and Andhra Pradesh – regions which represent 20% and 60% of the country's shrimp production respectively, said Durai Balasubramanian, secretary of the Pattukottai Shrimp Farmers Association (with 4,000 members).

As a result, farmers are considering a reverse in the trend which has seen Indian shrimp production rocket in 2014 – the switch from black tiger to vannamei farming.

“There is no cure for running mortality syndrome at the moment, but lots of consultants suggested to go for better farm management practices,” said Balasubramanian.

“P. monodon [black tiger shrimp] can only be produced under low stocking densities, so production will definitely come down.”

RMS has caused pond biomass to fall substantially for many farmers – mortality rates reaching 70% in most cases, according to a report by Mastan Vali, senior scientist with India's MAAARC [Matrix-ANU Advanced Aquaculture Research Centre].

Since October 2014, Tamil Nadu at least has struggled with whitespot syndrome as well, and stocking of ponds has been delayed. Production costs for vannamei have risen, while selling prices have dipped of late, spurring a reconsideration of which product is in farmers' interests, said Balasubramanian.

“In the current scenario, monodon is valued highly, it will help farmers to fetch high prices. Plus the amount of investment for monodon is lower than vannamei,” he said.

Sources from outside India have heard conflicting reports on the seriousness of the disease, with some confirming it seems to be bad, while others played down the impact.

One shrimp trader in Asia confirmed farmers in India seem to be mulling the switch back to black tiger, though not necessarily for disease reasons.

“Due to cool weather shrimp growth has been stunted, therefore many farmers have harvested their ponds earlier. Vannamei has not been so successful in this area [Tamil Nadu] this year, so some farmers are considering switching to black tiger.”

A second source, a buyer in the US, was unsure the information coming out of India was entirely correct. He agreed to hearing reports of disease across Tamil Nadu and Andhra Pradesh, and agreed disease has been lowering survival rates and slowing growth, but believes the farmers will not see better margins from a switch.

“Input costs [to farm vannamei] are actually slightly lower nowadays, but can go up due to diseases; slow growth, survival rates etc.,” he said.

Rabobank's prediction for farmed shrimp in 2015 was on the money, believes Balasubramanian.

“Prices will be roller coaster; if the prices move up farmers might come back to vannamei, or if prices stay at these levels India might go for less production compared to 2014,” he said.

“In future - March or April – if any new stocking is hit by viral outbreaks, then the situation will be worse, putting total production for the year down at least 30% from 2014.”

“As Rabobank mentioned, India is still vulnerable in terms of production.”

Since March 2011, a new syndrome has struck the industry, said MAAARC scientist Vali.

“The syndrome was such that the farmed shrimp in the affected ponds showed different mortality patterns, which are the result of unusual symptoms with no correlation to any other reported diseases.”

“Some farmers have lost up to four crops, with mortality percentage reaching 70% in most of the cases. As a result of this several farmers have closed down their operations. This condition is called as 'running mortality syndrome'.”

In the early stages of this condition, vannamei show certain gross symptoms. These include the animal's antennae being cut and the uropods turning red in color.

Later on, it is found that the hepatopancreua begins to turn reddish yellow; finally the entire body turns dark red in color.

Continuous internal mortality was noticed, dead shrimp settle at the bottom of the pond and do not rise to the surface. Mortality was noticed only during inter-moult stage, with a greater mortality rate in low saline ponds. White or yellow faecal matter can be noticed in the gut.

“In the early days, farmers used to manage this condition by regularly removing the dead shrimp from the pond. Reducing feed for a few days was also found to reduce mortality.”

“Some farmers opted for extensive culture, and were able to reach production up to 30 counts without RMS. Culture practices like reduced stocking density, nursery management, partial harvest, strict feed management and polyculture have reduced the incidence.”

According to observations made in the US, this disease caused chronic mortality for shrimp under commercial production conditions after about 8 – 10 weeks total elapsed time in post-larvae nursery and growout, continuing through to harvest size.

Mortality was at a slow rate (e.g. < 1 %/day), but the cumulative loss over time was high. Progression from morbidity to death was relatively slow but sure, unlike an acute vibrio infection.

India's shrimp production "took off like gangbusters" last year, according to one of the panelists at the National Fisheries Institute's Global Seafood Market Conference.

"The most astonishing thing -- I think we all agree -- is the amazing growth of Indian shrimp," another panelist told conference-goers during the conference's shrimp panel on Tuesday.

Production in India increased about 25%, to about 800 million pounds, during the 2014-15 production cycle, data from the Marine Products Export Development Authority (MPEDA) shows.

Yet finally such runaway growth is expected to subside in the 2015-16 production cycle, with the growth rate being much lower "in the near future", according to a slide presented during the panel's discussion.

“There are a lot of farmers that had started farming the past few years. We won’t see that continue this year,” one of the panelists said. 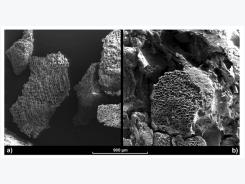 For the future, a feed that makes fish feces float? 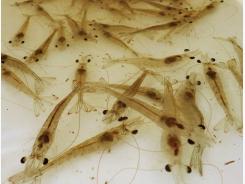 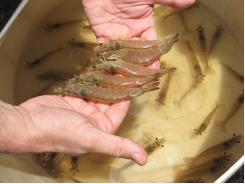