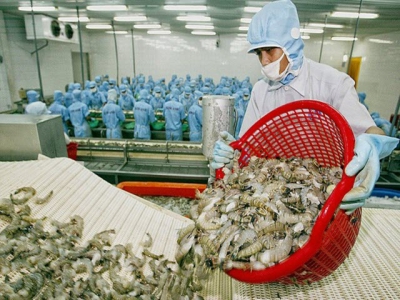 The implementation of the EU-Vietnam Free Trade Agreement (EVFTA) in early August represents hope that Vietnamese shrimp exports to the EU market will rise during the remaining months of the year.

Although in order to enjoy tax incentives, shrimp exporters must improve product quality.

The EU is the country’s fourth largest shrimp buyer after the United States, Japan, and China, accounting for 13.3% of the nation's total shrimp export value. Despite this, Vietnamese shrimp exports to the EU witnessed a consistent fall between March and June this year, although exports to this market during July and August showed signs of a slight increase from the previous months and over the same period last year.

After suffering a series of drops from March to June, local shrimp exports to the EU in July reached US$54.2 million, an annual rise of 2%. Indeed, the first half of August saw the export of this item to the highly-lucrative EU market hit US$29.4 million, marking a rise of 26% on-year. It is believed that domestic shrimp exports to the EU this August may enjoy a surge of approximately 20% compared to the same period last year.

Furthermore, experts anticipate that Vietnamese shrimp exports to the EU until the end of the year will continue to increase, although the growth rate is limited due to the negative impact of the novel coronavirus pandemic.

As a result of the tax advantage that Vietnamese shrimp enjoys in comparison to its competitors, EU importers are keenly seeking additional supply sources from the nation, with deeply processed, packaged, and ready-to-eat items for home consumption being the most sought after.

With regard to trends of the European shrimp market moving towards the end of the year, experts state that despite the gradual reopening of food establishments, coupled with the tourism industry restarting, shrimp importers and their suppliers remain under long-term pressure due to the uncertainty of the pandemic. With retail and online sales continuing to increase, demand for shrimp from the retail segment will be even higher once end-of-year holiday approach.

As a means of ensuring their quality and reputation, shrimp farmers must redouble efforts to improve their knowledge and experience in farming due to diseases relating to farmed shrimp being quite serious. In addition, many farms that run clean and intensive farming models tend to yield positive results, although it is difficult to replicate these models due to high requirements in terms of investment capital and knowledge.

Moreover, enterprises must also focus on building their own brands by improving their operational efficiency and competitiveness, along with joining the global value chain in a more extensive manner. The efforts made by each business will therefore contribute to making the domestic shrimp industry develop into a strong economic sector for the nation moving forward.

Vietnam ships first batch of shrimp to EU under EVFTA 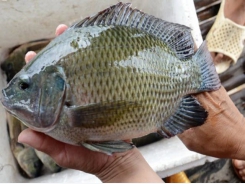 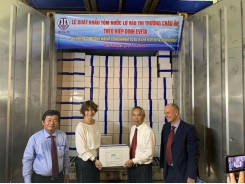 EVFTA: First batch of shrimp from Vietnam on its way to EU
Sản phẩm khuyên dùng

EVFTA: First batch of shrimp from Vietnam on…