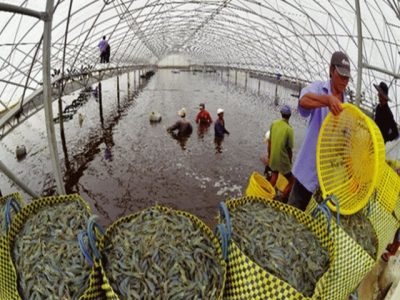 Kiên Giang province, in the The Mekong Delta, pretends to expand sustainable shrimp farming models to produce a 76,000- ton-target this year, the Department of Agriculture and Rural Development announced.

The province plans to carry out industrial and semi-industrial farming on 3,100 hectares this year, mostly in the Long Xuyên Quadrangle and U Minh Thượng District, compared to 2,590 hectares last year. Currently, mostly white-legged shrimp are being bred under the industrial farming model on an area of 150 hectares.

“The use of advanced farming techniques that are sustainable and carry few risks has been expanded and contributed to increasing the province’s shrimp output”, said Đỗ Minh Nhựt, deputy director of the department to Viet Nam News.

The advanced techniques include using nets to protect shrimp ponds from the sun, plastic sheets to cover pond beds and fans and pumps to generate oxygen for the water.

Besides, the department and other relevant agencies will carefully monitor the environment, control shrimp diseases and instruct breeders in Vietnamese good agricultural practices (VietGAP).

According to the department of Agriculture, the province needs about 10 billion shrimp broodstock this year, but can only produce around half of that number.

To manage the quality of broodstock bought in other provinces and cities, the Animal Health and Husbandry Sub-department has set up inspection stations on main roads entering the province since early this year.

Tests are also being carried out to detect two diseases that affect fingerlings: white spot and acute hepatopancreatic necrosis disease, also known as early mortality syndrome. Also, aquaculturists are provided with chlorine to disinfect ponds against these diseases.

This model was started in October 2017 by two producers, who stocked  120,000 black tiger shrimp fry in 2-hectare ponds. One and half months later 1.6 tonnes of spotted scat fry were released in the ponds.

The two households participating in the trial harvested six tonnes of spotted scats and 2.8 tonnes of black-tiger shrimp after six months.

One of the advantages of this model is that the production cost is lower. In addition, it is friendly to the environment because the fish eat all the waste of the shrimp food and algae in the pond, which helps to prevent the shrimp diseases. 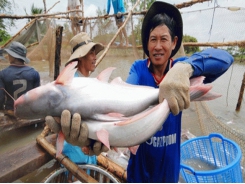 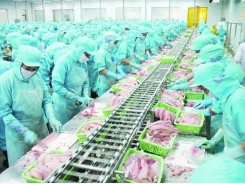 Fishery exports 'cooled down' in the first month of the year 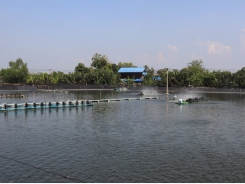