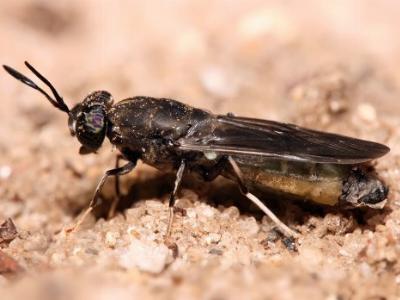 The use of insect meal in animal diets is promising. But what is the nutritional value of this protein and can it serve as a good replacement for fish meal in aquafeed? We have listed some of the current knowledge in this article.

The aquafeed industry is turning from a fish meal/fish oil dependent industry to a sector that produced fish diets that are partly or even completely free of these marine ingredients. Alternatives to fish meal can be sought in algae or vegetable proteins. The use of insect meal as a valuable alternative is gaining a lot of interest. For example the Black soldier fly larvae (also called: black soldier fly larvae meal, black soldier fly prepupae meal, soldier fly prepupae meal, black soldier fly maggot meal) that can be used as a feed ingredient in different forms (live, chopped, or dried and ground). The larvae can feed quickly, from 25 to 500 mg of fresh matter/larva/day, and on a wide range of decaying organic materials and manure. There have been attempts to create a defatted meal by cutting the larvae to enable the leakage of intracellular fat and then transferring the material to a tincture press. Black soldier fly larvae are a high-value feed source, rich in protein and fat. They contain about 40–44% crude protein (CP). The amount of fat is extremely variable and depends on the type of diet. Several experiments have shown that black soldier fly larvae could partially or fully substitute for fishmeal in fish diets. However, additional trials as well as economic analyses are necessary because reduced performance has been observed in some cases, and the type of rearing substrate and the processing method affect the utilisation of the larvae by fish.

Chopped soldier fly larvae grown on hen manure fed to channel catfish alone or in combination with commercial diets resulted in similar performance (body weight and total length) as on the control diets (young catfish refused whole larvae but consumed chopped ones). Aroma and texture of channel catfish fed larvae were acceptable to the consumer (Bondari and Sheppard, 1981). A later study was less favourable: replacement of 10% fishmeal with 10% dried soldier fly larvae resulted in slower growth over a 15-week period for sub-adult channel catfish grown in cages. However, the replacement did not reduce growth rate significantly when channel catfish were grown in culture tanks at a slower growth rate. Feeding 100% larvae did not provide sufficient DM or CP intake for good growth for channel catfish grown in tanks. Chopping of the larvae improved weight gain and increased feed consumption in channel catfish, but resulted in lower feed efficiency. Greater larvae waste was observed in the chopped larvae fed tanks than in the whole larvae fed tanks, and chopping was considered to be unnecessary in channel catfish feeding (Bondari and Sheppard, 1987). A comparison between menhaden fishmeal and black soldier fly prepupae meal showed that the latter could be advantageous as a replacement for fishmeal provided it was also supplemented with soybean meal in order to obtain isoproteic diets. It was shown that an inclusion rate higher than 7.5% of black soldier fly prepupae meal was unnecessary (Newton et al., 2005). In yellow catfish, 25% replacement of fishmeal by black soldier fly larva powder produced no significant difference in the growth index and immunity index when compared with those in the control group (Zhang et al., 2014a and Zhang et al., 2014b).

Larvae of the Black Soldier Fly are high valuable feed ingredients, for both livestock and fish.

Chopped black soldier fly larvae (grown on hen manure) fed to blue tilapia alone or in combination with commercial diets resulted in similar performance (body weight and total length) as the control diets. Aroma and texture of tilapia fed larvae were acceptable to the consumer (Bondari and Sheppard, 1981). In a later experiment, feeding dry black soldier fly larvae as the sole component of the diet did not provide sufficient dry matter or protein intake for good growth for tilapia grown in tanks. Chopping of the larvae however improved weight gain by 140% and feed efficiency by 28% when it was used as the sole component of the diet (Bondari and Sheppard, 1987).

Dried ground black soldier fly prepupae reared on dairy cattle manure enriched with 25–50% trout offal could be used to replace up to 50% of fishmeal protein in trout diets for 8 weeks without significantly affecting fish growth or the sensory quality of trout fillets, though a slight (but non-significant) reduction in growth was observed (Sealey et al., 2011). In a 9-week study, replacing 25% of the fishmeal protein in rainbow trout diets with black soldier fly prepupae meal (reared on pig manure) did not affect weight gain and feed conversion ratio (St-Hilaire et al., 2007a).

A control diet containing 200 g/kg fishmeal (FM) was stepwise replaced by insect meal (black soldier fly larvae) at 25%, 50% or 100% FM replacement. Insect meal containing diets performed equally well as the FM group and increase in feed conversion efficiency was observed. Histology did not show any differences between any of the dietary groups and sensory testing of fillets did not reveal any significant difference (Lock et al., 2014). However, these authors did caution that the method of preparation of insect meal could impact performance.

Juvenile turbot accepted diets containing 33% defatted black fly soldier larvae meal (as a replacement of fishmeal) without significantly affecting feed intake and feed conversion. However, specific growth rate was lower at all the inclusion rates and higher inclusion rates decreased the acceptance of the diet. This resulted in reduced feed intake and lower growth performance. The presence of chitin might have reduced feed intake and nutrient availability and therefore reduced growth performance and nutrient utilisation (Kroeckel et al., 2012).

Frass (excrements) from black soldier fly larvae reared on dried distillers grains were used in commercial prawn farms in Ohio (replacing the commercial regular feed). It resulted in similar performance as with the regular prawn feed, with better economic returns. The prawns fed black soldier fly larvae frass were of a lighter colour and no difference in prawns taste was found (Tiu, 2012). 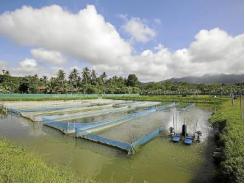 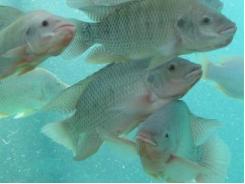