How to manage water effluent from shrimp farms 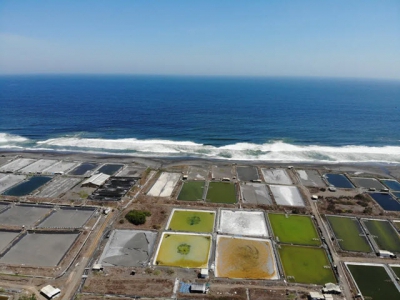 Effluent from shrimp ponds can have a significant impact on the natural environment and on neighbouring shrimp farms, but there are a number of ways to reduce this impact, for the good of both the farmers and their surrounding areas.

Shrimp aquaculture has been an economic boon, but it can come with significant environmental impacts

The shrimp aquacultre industry has grown rapidly in developing countires in the last decades, in particular in Asia and Latin America, enabling countries to generate income and provide jobs for thousands of people. Every major producer is competing to set bigger production targets, year after year.

Unfortunately, the great leap in production is usually followed by less desirable impacts on the farm’s environmental carrying capacity, which risk reducing productivity. One of the root causes of this problem is the discharged water effluent from the shrimp farms. The discharged water contains a high load of nutrients and organic matter. If left untreated, it can cause severe damage to the surrounding water bodies and significantly reduce the environmental carrying capacity.

Why water wastes are dangerous

Shrimp farms are usually located in coastal areas, with many directly by the shore. When farmers start a production cycle, they typically take water from the ocean or from wells to fill their ponds. Water is released back into the environment throughout the production cycle and at the end through a water outlet channel.

Shrimp farm water effluent contains nutrients, such as nitrogen and phosphorus, suspended solids, and organic matter. All of them are by-products of the farming activities - from uneaten feed, shrimp faeces and dead skin, to decomposed bacteria and phytoplankton. Once discharged, the water waste with a high organic load will coalesce with the surrounding water bodies.

In small quantities, shrimp farming water effluent is beneficial for the surrounding environment, be it a lake, river or ocean, due to its nutrient content and organic load. But as more farms discharge their effluent, they can significantly reduce water quality. More importantly, the amount of discharged water from shrimp farms could exceed the carrying capacity of the local water bodies. 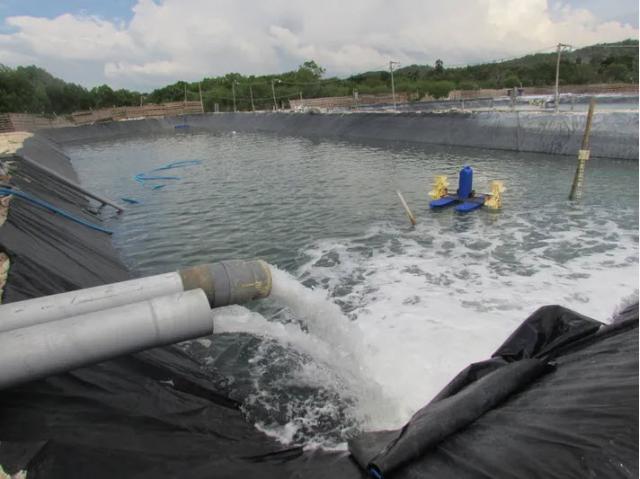 Many farmers use ponds to settle intake water (pictured), but not all use ponds for settling solids out of their outflows. Photo: Alune

Carrying capacity refers to the maximum biomass of organisms that can be supported by a particular unit of area, in this case a water body, without exceeding the maximum impact to productivity and the environment. If the carrying capacity is exceeded, the water source could no longer be used for production. The impact will not only be detrimental to the environment, but simultaneously to the farmers as well. Environmental devastation will be followed by significant downfall in production.

Untreated water effluent could be a vehicle that spreads diseases as well. A disease could spread from one farm to neighbouring farms along the coast if they all use the same water source, causing a larger outbreak in the region. Once that happens, it will be highly difficult to combat.

Here are some of methods to reduce water pollution from shrimp farming activities.

If your farm experiences a high organic load, the feeding regime should be one of the first things to look at. Since most of the organic matter produced in the pond comes from aquafeed, the feed quality and regime directly influences the amount of organic material in the water. In order to reduce excessive nutrients, farmers can use high-quality feed and implement appropriate feeding practices – namely feeding the right amount at the right time. 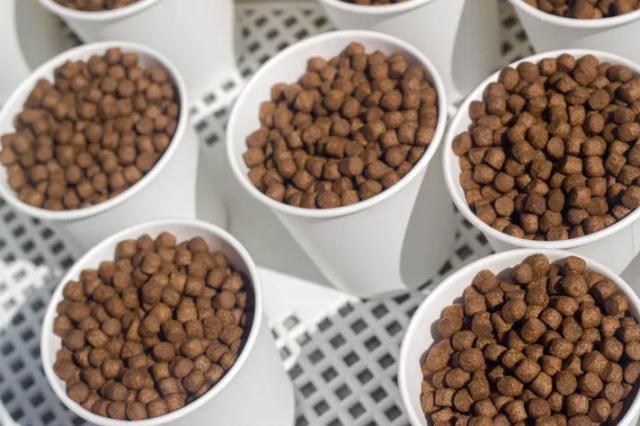 The ideal size for the settlement pond varies between farms, but 10 percent to 15 percent of the total production pond size is typical. However, it all depends on the desired outcome.

During culture, it is recommended to reduce the amount of organic load which contains ammonia in the water by way of siphoning. The organic load that settles as sludge on the pond bottom can be siphoned regularly to decrease ammonia concentration. This is both beneficial for maintaining good water quality during the farm cycle and for ensuring that the water effluent contains low organic load.

Similarly, water exchange is a good way to prevent organic load from building up and causing health problems in shrimp and from polluting the environment.

Avoid water exchange before day of culture (DOC) 30 to 40 to maintain stable, good water quality. We recommend starting daily water exchange from 10 to 30 percent and increase it slowly as the cycle progresses. It is also important to use pre-treated water for exchange to avoid disease problems since untreated water may introduce pathogens to the pond.

One method of bioremediation is utilising beneficial bacteria, or probiotics, to treat discharge water. Bacteria strains such as Bacillus, Pseudomonas, Acinetobacter, Cellulomonas, Rhodopseudomonas, Nitrosomonas, and Nitrobacter facilitate the rapid decomposition of various organic compounds in the water and reduce the organic load. The bacteria will simultaneously compete with opportunistic pathogens and inhibit their growth. This will prevent the spread of pathogens to the surrounding body of water.

Before discharging the water, farmers can apply commercial probiotics in the post-treatment pond, allowing them to act as bioremediators. Click here to read more about probiotics.

The other method of waste management is using a biofloc system. It is a new, emerging system which has been slowly gaining popularity. In a biofloc system, water exchange is limited or eliminated and the water is maintained at a balanced carbon to nitrogen (C/N) ratio by adding external carbon sources, such as molasses. The objective is to stimulate the growth of microbial communities which will coagulate into flocs. 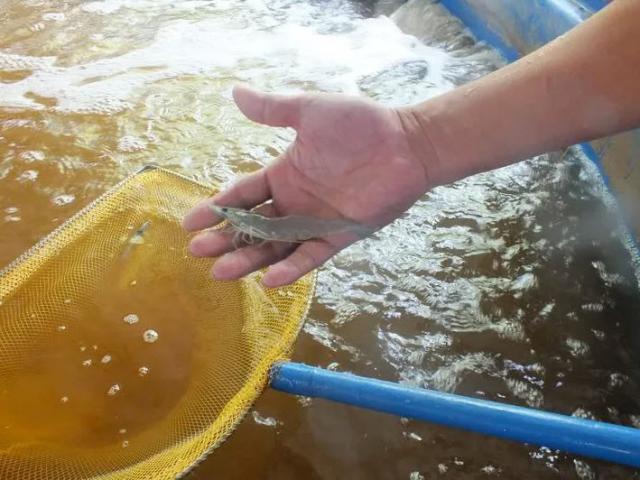 The flocs convert ammonia and other organic compounds in the water into consumable food for the shrimp. This results in better water quality and less pathogen proliferation in the water. Limited or zero water exchange also significantly reduces the amount of water discharge. Explore our continuing coverage of biofloc systems here.

Studies have shown that polyculture can reduce shrimp farm’s environmental impacts. Through a polyculture system, a particular species can feed on waste from shrimp farming activities, making it a promising method for sustainable shrimp production. There are a variety of species that can just do this.

Tilapia are beneficial for water effluent treatment due to their ability to feed on organic waste, which in turn significantly minimises nitrogen and phosphorus as well as vibrio loads in the water.

Sequential shrimp-tilapia polyculture works by stocking adult or juvenile tilapia in a post-treatment pond. They are left to graze the waste for a period of time before the water is discharged into the environment. 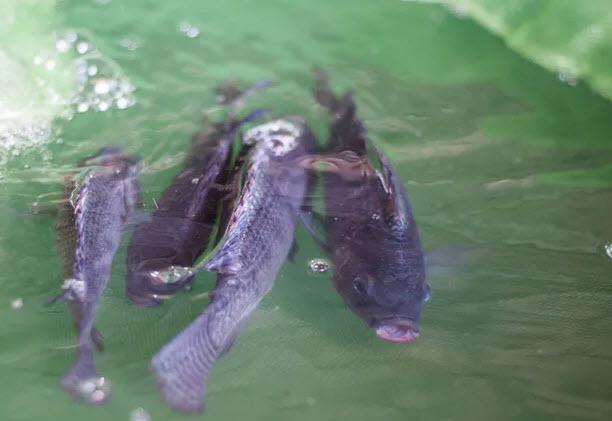 Tilapia can be used as a water treatment strategy due to their ability to feed on organic waste. Photo: FAI Farms

Seaweeds - specifically Gracilaria sp - are nitrogen-starved organisms with the ability to accumulate nitrogen. They can also utilise nitrogen as a source of energy, making them suitable for combining with shrimp. Seaweed can absorb organic load from shrimp farming activities by means of phytoremediation, which simply means using plants to reduce pollutants from water.

Before releasing the water from grow-out ponds, farmers can use seaweed as biofilters in the post-treatment pond. The seaweeds are then left to feed on the waste before discharging. They may also be used in a recirculation system where there are separate tanks filled with seaweed as biofilters.

Milkfish, like tilapia, can feed on organic wastes. They can adapt to various environmental conditions and have a high disease resistance. Using milkfish to treat waste can reduce the organic load, making the discharge water less polluting to the environment.

Similar to tilapia, milkfish can be stocked in the post-treatment ponds to feed on the water waste before releasing the water to the environment.

Mangroves can also remediate waste effluent through their capacity to absorb and utilise nutrients and organic matter from shrimp farming activities. Mangroves can be used as a buffer or protective belt between the farming areas and the ocean. Before flowing to the ocean, the discharged water from the shrimp farm passes through the mangroves. While in that environment, the suspended solids settle and the nutrients are absorbed. This results in a less polluting output. As shrimp aquaculture expands and intensifies, farmers must actively manage the environmental impacts of production. The negative effects left by shrimp wastes could be devastating for both the environment and the farmers.

This article merely scratched the surface of this topic, but we hope that the alternative solutions provided can give practical insights on why it is important for farmers to improve their waste management practices and environmental sustainability. 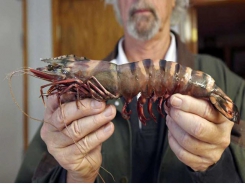