How to improve piglet gut health 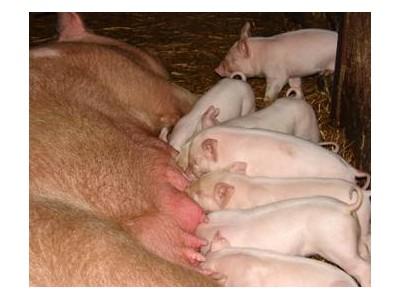 After weaning, the passive protection from sow’s milk is withdrawn and the young piglet depends solely on any active (self) immunity developed during suckling. Active immunity develops slowly and depends on lactation length and level of exposure to pathogenic organisms. | KolaaCZ, freeimages.com

Abrupt weaning at an early age has been associated with deterioration of piglet gut health, as evidenced by alterations in gut epithelial morphology. Before weaning, intestinal villi (responsible for nutrient absorption) are thin and elongated, whereas after weaning, they quickly become thick and short. Villus height has been shown to decrease about 75 percent during the first 24 hours post-weaning. Similarly, depth of intestinal crypts (responsible for regeneration of villi) increases at weaning and continues during the first two weeks post-weaning. Following recovery from weaning, villi become short and leaf-shaped similar to those found in adults.

The post-weaning decrease in absorptive capacity in weaned pigs, coupled with immature enzymatic digestion, often lead to nutrient indigestion and intestinal upsets causing diarrhea, depression of growth and even death.

In a seminal experiment, Pluske et al. (1996), indicated that villous height is highly correlated with post-weaning growth and that the most important factor determining villous height post-weaning was the level of feed intake. The data in Figure 1 clearly demonstrate that weaned piglets offered cow’s milk at levels below those achieved under ad libitum conditions exhibited reduced villous height and increased crypt depth symptoms similar to those observed in piglets offered a solid diet. In contrast, when piglets were allowed to consume relatively high quantities of cow’s milk, intestinal morphology parameters were similar (or even better) to those observed prior to weaning. 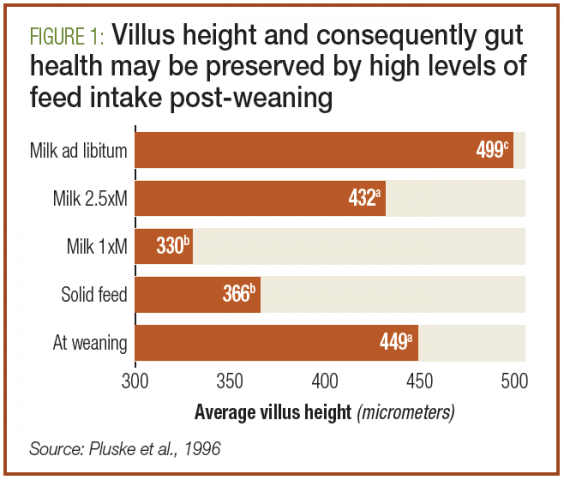 Further evidence to the pivotal role of feed intake on post-weaning gut health is furnished by a meta-analysis study, in which it was demonstrated that piglets consuming less than 140 g/day during the first week post-weaning were more prone to digestive disorders compared to piglets consuming at least 190 g/day. Hence, I have always judged commercial piglet feeds by their ability to ensure a daily feed intake of between 150 and 200 g/day during the first week post-weaning.

Finally, it should be noted that the abrupt increase in feed intake during the third to fifth day post-weaning, which is often associated with early-weaning, is very positively associated with digestive disorders and scours. An overload of feed, especially of low digestibility, usually overwhelms the immature digestive system, especially if gastrointestinal health has been impaired due to anorexia during the first couple days post-weaning. To this end, it is imperative to ensure piglets exhibit high levels of feed intake immediately post-weaning or their feed intake must be controlled during the first week.

Closing, it is also interesting to note that vaccinations that often occur at the time of weaning may be responsible for reduced feed intake during the first week post-weaning. This is because vaccinations often cause a (natural and expected) mild inflammation (as a result of the immune system stimulation to produce antibodies as a result of vaccination) that invariably reduce feed intake and growth rates. Such effect has been demonstrated in trials and it is often observed between the third and fifth day post-weaning — especially in piglets without prior access to high quality creep feed.

Gut immunity is a daily challenge

Sow’s colostrum provides the first wave of passive immunity through the absorption of intact immunoglobulins in to the bloodstream. This protective action of colostrum is effective only against pathogens to which the sow has been exposed. Mature milk is also a rich source of immunoglobulins, especially IgA, which act locally at the luminal level. Milk immunoglobulins provide a constant protective barrier against pathogenic invasion, and they also bind and inactivate antigens directly. The so-called “mammary link” also ensures a rapid transfer of antigen-programmed lymphocytes from the sow’s gut directly to the mammary gland, where they produce relevant immunoglobulins immediately available for the suckling piglet.

After weaning, the passive protection from sow’s milk is withdrawn and the young piglet depends solely on any active (self) immunity developed during suckling. Active immunity develops slowly and depends on lactation length and level of exposure to pathogenic organisms. A change of environment and exposure to new pathogens virtually eliminates any benefits from active immunity acquired during suckling. At weaning, major alterations in intestinal immunity are observed during the first 24 hours. The activation of the immune system at weaning is followed by systemic and local inflammatory reactions, which gear metabolism away from growth and development. Gastrointestinal inflammation also compromises the protective functions of mucosal epithelial barrier and increases sensitivity to dietary antigens; thus, minimizing activation of the immune system remains a major goal in early weaning systems.

In support of gut immunity during the post-weaning period, in-feed sources of immunoglobulins (colostrum, plasma, egg antibodies) are highly prized, but with quality comes high cost that must be balanced by increased gut health and ultimately improved growth performance. In fact, this is invariably the case, hence the widespread use of in-feed immunoglobulins worldwide.

The sterile gastrointestinal system of the newborn piglet is quickly colonized by a host of maternal and environmental bacteria. Nevertheless, the establishment of a healthy intestinal microflora is a gradual process affected by several ill-defined factors including nutrition and immunity status.

The presence of intestinal bacteria has significant effects on intestinal development and function. Compared to germ-free animals, the presence of a normal bacterial population in conventionally raised piglets increases gut mass, reduces villous height, and increases crypt depth. Germ-free and antibiotic-treated animals also have greater digestive enzyme activity. The effects of intestinal bacteria on gut morphology and function appear to be superimposed on any adaptive responses to dietary changes, and thus maintaining piglets in a healthy environment will always reduce the impact of drastic dietary interventions.

Intestinal bacteria growth is always at the expense of the host. Thus, conventionally raised piglets exhibit reduced growth and efficiency of feed utilization compared to naïve animals. It is believed that this is a combination of reduced digestive and absorptive capacity, utilization of dietary nutrients for bacterial growth, and increased metabolic demand for a larger gut.

The presence of intestinal bacteria, however, is of paramount importance to the health of the host animal. Germ-free and antibiotic-treated animals are more susceptible to diseases because they lack the suppressive effect of normal intestinal microflora on pathogenic organisms. To this end, healthy intestinal microflora is often supplemented with substrates suitable for their proliferation (functional fibers). Preparations of live bacteria or spores (probiotics) are also used to augment the numbers of beneficial organisms at the expense of pathogens. Both dietary intervention strategies aim to the establishment of a healthy intestinal microflora to exclude any potential pathogens and maintain gut health. 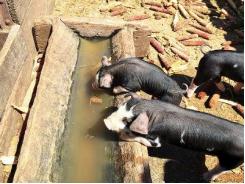 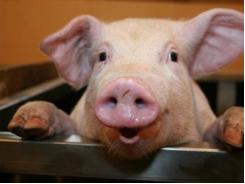 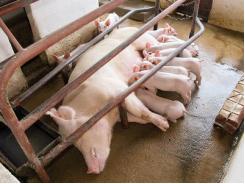