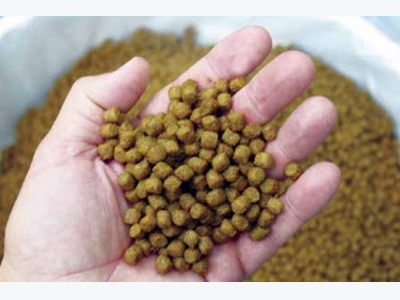 Environmentally responsible, profitable aquaculture has its foundation in efficient resource use. Feed usually is the most costly item in aquaculture production. Fishmeal for aquaculture feeds is particularly expensive, and its sup-ply from the oceans is limited. Some environmentalists are concerned about the growing amount of fishmeal used by the aquaculture industry, especially in the culture of species that need a high percentage of fishmeal in their diets. Moreover, a great dependence on fishmeal could lead to a future limit on the expansion of aquaculture.

Nearly all aquaculture producers use feed conversion ra-tios (FCRs) as an index of feed use efficiency. FCR is determined by dividing the total feed use in a production unit or entire aquaculture facility by the net production of the culture species.

Although FCRs are an excellent measure of feed use and economic efficiency, they can be misleading ecologi-cal indicators. For example, attainment of a 1.0 FCR does not imply that no wastes resulted from feeding.

Put another way, the production of 1 kg live biomass resulted in 0.65 kg waste (0.90 kg dry matter in feed - 0.25 kg dry matter in biomass). The recovery of dry matter feed nutrients in harvested biomass was 27.8% at an FCR of 1.0. As feed-conversion ratios increase, the quantity of waste per kilogram of production increases, and the per-centage of recovered feed nutrients in the harvested bio-mass decreases (Table 1).

Protein, especially protein from fishmeal, is the most expensive component of aquaculture feeds. It also is the source of nitrogen in feeds and feeding wastes. There are possible economic and environmental benefits to feeds that contain no more protein and fishmeal than neces-sary. Several indexes can be useful in evaluating the effi-cient use of protein and fishmeal in aquaculture.

The protein conversion ratio (PCR) is the ratio of feed protein to net harvest biomass. It is calculated by multi-plying FCR by the proportion of crude protein in feed as shown below:

The PCR for a feed conversion ratio of 2.0 using a 35% crude protein feed is 0.7. For the same feed protein con-tent, PCR declines in direct proportion to declining FCR (Table 1).

Protein efficiency (P.E.) is estimated by multiplying FCR by the ratio of crude protein percentage in feed to that in the culture species as shown below:

Protein efficiency is an estimate of the ratio of feed protein applied to protein contained in the net harvest biomass of the culture species. Live shrimp typically contain about 19.5% crude protein, while tilapia usually have a crude protein concentration of 14%. The P.E. for a shrimp farm where FCR is 2.0 and feed contains 35% crude protein is 2.0 (35%/19.5%) = 3.63. Tilapia feeds often have about 30% crude protein, so for an FCR of 2.0, P.E. is 4.29 for tilapia.

Environmentalists often consider fishmeal in terms of the live fish equivalence (LFE) of the meal used in producing a unit weight of fish or shrimp. In marine fishmeal man-ufacturing, it requires 4-5 kg of live marine fish to give 1 kg fish-meal. Using a ratio of 4.5 kg fish to 1 kg fishmeal, the LFE can be calculated as follows:

Reducing FCR at aquaculture production facilities lowers feed costs and provides environmen-tal benefits. There is less waste per unit of production, and pro-tein and fishmeal are conserved. Even greater benefits can be achieved if percentages of pro-tein and fishmeal can be lessened without lowering feed quality and increasing FCR.

It is noteworthy that shrimp culture often requires a greater amount of marine fish for fishmeal in feed than it yields in shrimp. This is an example of why some envi-ronmental groups claim that certain types of aquacul-ture detract from rather than add to world fisheries pro-duction.

A comparison of shrimp culture and tilapia culture using the variables discussed above illustrates signifi-cant differences related to fishmeal use in feed (Table 2). This is a major reason tilapia production usually is con-sidered more environmentally friendly than shrimp pro-duction.

Two major factors that can improve the efficiency of aquaculture and provide environmental benefits are the use of high-quality feeds and good feeding practices that lower FCR and reduce the percentage of fishmeal in feeds.

Table 2. Comparison of feed use efficiency in culture of shrimp and tilapia. 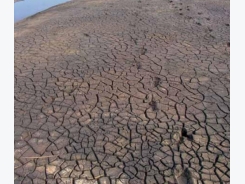 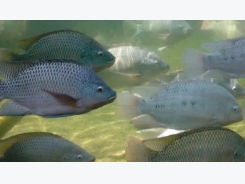 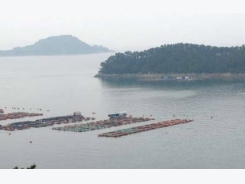