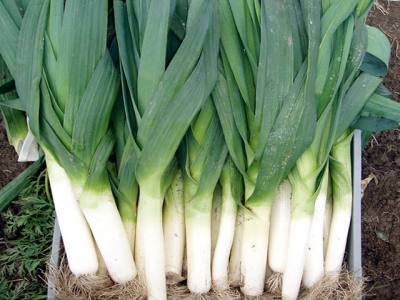 Gardeners in the north of England, Durham and Northumberland particularly, have made the growing of exhibition leeks very much their own. Strains and seeds are very jealously guarded and are even handed down from father to son. Some of the so-called ‘pot’ leeks (these are virtually unblanched) may be anything up to 5 inches in diameter.

But this does not mean that leeks cannot be grown elsewhere. What they need is a long, cool growing season. But there is more to growing these monsters than just putting in the seed and feeding the growing plants prodigiously through the summer.

All varieties of leeks have to start initially from seed, but there is often great variation in a sample. When planting leeks, the best plants are allowed to run up to form a seed head the following year. In the drumstick-like flower head are tiny plantlets known as pods as well as seed. These pods form in July but they do not develop very quickly and are capable of living on practically nothing, in fact I have kept old seed heads until the following spring when the pods have still been in first class condition.

They are very tenacious and live on the little moisture in the seed head and the atmosphere as they do not actually put out roots until they are  planted. It will be found that the seed will shake out quite easily but, just to be on the safe side, put a paper bag, not a plastic one, over the head and secure it with an elastic band so that any seeds which have already ripened will not be lost. Use a thin white bag so that the pods do not suffer from lack of light.

When all the seed has been taken, the heads can be stood in a cool but not too dry a place (by a window in the shed will be perfect) where they will keep quite green and plump until December when the pods can be carefully removed and pricked out into boxes of sandy soil and kept in the greenhouse.  This vegetative propagation is the only way of ensuring that the ‘children’ are exactly like the parent. However, it has the disadvantage that after a time deterioration sets in and vigour has to be re-introduced by raising new plants from seed taken from selected plants. This needs to be done roughly every fifth year.

This may sound complicated, but it is no more difficult than taking the cuttings from violas and over-wintering them in a cold frame. This process of selection each season ensures that a superior strain is built up resulting in the production of these huge specimens.

Just as a point of interest, there is no fundamental difference between what is known as a pot leek and a blanched leek. Both start off the same but the latter is blanched and elongated either by earthing up or blanching with cardboard or paper collars to produce a stem which may be 2 feet long or more.  On the other hand, pot leeks simply sit on the ground and are not blanched except for the lower 5 inches or so.

There are several other good things which have been evolved over the years, but the main thing about leeks is that they need a rich soil, a fair amount of feeding and, as they are surface rooters, the soil surface should not be unduly disturbed by hoeing. Unless you have a very deep fertile soil, growing leeks in a deep trench does more harm than good, as it reduces the amount of good soil under the roots. This method of growing leeks and vegetables such as celery, peas and beans in trenches was evolved in the large private gardens where the good soil was some 2 or 3 feet deep

The trench method facilitated the flooding of the trenches with water or liquid manure and the subsequent blanching. As few of us have soils which have been worked continuously for hundreds of years and trenched and manured during that period, my advice is to grow these crops on the flat with as much good soil and manure under them as is possible.

Dig in as much manure and compost as can be spared. Ideally half a barrow load per square metre, plus 2 oz superphosphate, 1 oz bonemeal and about 1 oz sulphate of potash. Work this in thoroughly to a depth of at least l2 to 15 inches and tread firm the soil a few days before planting. Any subsequent feeding should be mainly nitrogenous, preferably organic such as dried blood or liquid manure. During dry periods water thoroughly and apply soot water.

All sorts of weird and wonderful feeds are often given to leeks, including beer, stout, sugar and water and other less pleasant concoctions. Actually these substances do not feed the leeks directly but stimulate fungi and bacteria to break down more of the available raw materials in the soil.

To ensure a good long period of growth, seeds and pods should be started off in gentle warmth in January and the subsequent small plants potted up individually into 3 1/2 in or 4 inch pots and grown on in a minimum temperature of 7.5° to l0°C (45° to  50°F) until about April when they can be planted out either under cloches or, as so many leek growers do, under glass jars. This ensures continuity of growth without any check.

For pot leeks, a few inches of soil pulled up round the plants from the end of June to the end of July will be sufficient, but drainage pipes should be used for obtaining a long blanched stem. About the end of June, place one 6 inch diameter pipe over the plant and leave this for a week or two until the leaves become elongated. Then start by putting about 3 inches of peat in the pipe and gradually increase this. When the first drainage pipe is about half full (that will be to a depth of roughly 6 inches) place another pipe, 3 inch in diameter, over the leek so that it rests on, the peat in the larger pipe. Gradually raise this by adding more peat. In this way you will obtain 18 to 20 inches of beautifully blanched leek some 2 inches in diameter.

Next time you see bundles of these amazing cylindrical leeks at the large shows, you will know exactly how it is done and the amount of work it entails.

Leeks for the Kitchen

You can, of course, sow from January to April in boxes or a nursery bed for ordinary culinary purposes. For home use I recommend the varieties The Lyon, Musselburgh and Giant Winter.

Plant out from late April onwards in 6 inch deep holes made with a dibber spaced 6 inches apart with 15 inches between the rows. Drop one young plant into each hole. There is no need to put any soil in the holes as it will gradually fall in, giving you 6 inches of blanched stem. In dry weather fill the holes with water at planting time.

Leeks have few, if any pests but suffer from the same diseases as onions.

The earliest leeks can be dug up for use at the beginning of October. Loosen the soil round each plant with a fork before pulling it out. When harvesting leeks grown in trenches, put the soil back so that the remaining leeks stay in the dark.

Acquisition, an extra-long-stemmed variety. Leaves golden-green, much used for shows. 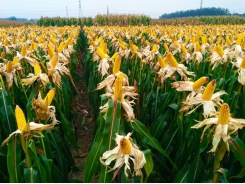 The farming philosophy of a top maize farmer 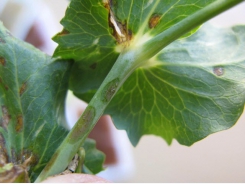 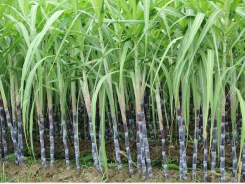