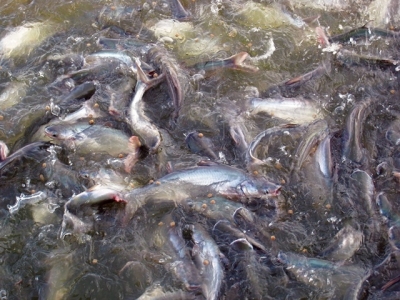 Pangasius are active eaters. Better understanding of their protein and amino acid requirements will help nutritionists optimize feed and fish performance while reducing the waste released from fish farms.

Ongoing research with various fish species has shown that balancing the amino acid profiles of diets with free amino acids can be an effective strategy in reducing levels of fishmeal and other dietary proteins while reducing the nitrogen excretions of the fish. Recent studies showed the approach was effective in significantly reducing dietary protein levels in feeds given to grass carp, hybrid tilapia and hybrid catfish.

The authors conducted two feeding trials to evaluate the feasibility of reducing dietary protein levels from 28 percent to 25 percent for striped catfish, Pangasianodon hypophthalmus, that received diets with balanced amino acid profiles. Trial I was performed under practical conditions in collaboration with a major Vietnamese catfish producer. Groups of 240 fish with average initial body weights ranging 37-40 g were randomly distributed among 12, 3- x 2- x 3-m cages in a cage-cum-pond system at a stocking density of 13.33 fish/m3.

b Values need to be divided by 0.78 to calculate levels of supplemental L-lysine hydrochloride.

Table 1. Analyzed composition (% as fed) of experimental diets fed to Pangasius in Trial I.

Promising results obtained in Trial I led to a second trial under laboratory scale (Trial II) in collaboration with the fisheries faculty of Kasetsart University in Bangkok, Thailand. For this trial, which assessed the possibility of reducing the dietary protein level down to 23 percent, groups of 10, 20-g fish were distributed in 12, 1,000-L tanks with 3 tanks/treatment. The pangasius were fed at a rate of 3 to 4 percent of body weight for 90 days.

Following an approach similar to that set out in Trial I, the experimental diets included a positive control containing about 26 percent crude protein (diet 26CP) and three diets with lower protein levels (about 24 percent in diet 24CP, 23 percent in 23CP and 23CP with extra methionine and lysine, Table 2). The amino acid profiles of the different diets were balanced with DL-methionine, L-lysine, L-threonine and L-tryptophan according to the guidelines of the Aquaculture Department of Vietnam Ministry.

The striped catfish in Trial I grew equally well on diets having protein levels of 28 percent or 25 percent, provided the dietary amino acids were balanced. The responses of the fish to gradually reduced protein supplies under practical conditions are presented in Table 3.

Means within a row with unlike superscript letters differ significantly (P < 0.05).

At 1.4 to 3.3 percent, overall mortality was low in all treatments (data not shown), indicating that pond and water quality were correctly monitored and maintained. The reduction of dietary protein level from 28 to 25 percent in concert with amino acid supplementation showed very promising results in this species.

Specific growth rate (SGR) was similar among fish fed the control or protein-reduced diets (Table 3). Curiously, SGR and protein-efficiency ratio (PER) values were higher in fish fed diet 25CP than in those fed the 26CP or 27CP diets. Final body weight, weight gain and PER were significantly lower in fish fed 27CP relative to the control group. Although not statistically significant, a lower initial body weight together with a slightly lower supply of methionine, methionine + cysteine, lysine and threonine might have contributed to the lower performance of the 27CP compared to the 28CP and 25CP groups.

In Trial II, the reduction of dietary protein level from 26 to 23 percent did not significantly impact the SGR, PER or carcass quality of striped catfish (Table 4). The ability of fish fed the 23CP diet to reach a final body weight similar to those in the control group was, however, dependent on 0.06 percent higher dietary methionine and lysine levels and highlighted the need for accurate information on the amino acid requirements of this species.

Means within a row with unlike superscript letters differ significantly (P < 0.05).

The finding that responses to reduced-protein diets seemed highly dependent on the level at which amino acids were added in the diets in relation to species-specific amino acid requirements agreed with 2010 findings by Dr. Dhanapong Sangsue and co-workers on hybrid catfish, Clarias macrocephalus x Clarias gariepinus.

Among other strategies, a better understanding of the protein and amino acid nutrition of Pangasius hypophthalmus will help nutritionists optimize the costs of feed and fish performance while reducing the nitrogen waste released from fish farms to the environment.

(Editor’s Note: This article was originally published in the May/June 2014 print edition of the Global Aquaculture Advocate.) 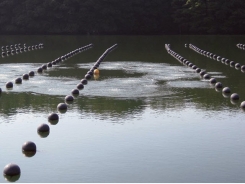 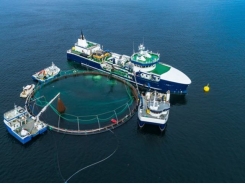 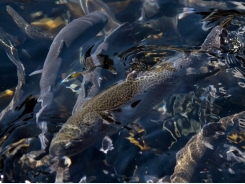