While U.S. shrimp importers wrangle with new strategies to drive demand for shrimp amid a glut in supply, India’s farmed shrimp sector predicts consistent growth in the near term. Photo by Darryl Jory.

Global shrimp aquaculture practices and performance have taken huge leaps forward over the past several years amid the ever-present threat of disease. Despite their success, shrimp producers now find themselves navigating a glut of supply, a rut of low market prices and a drastically shifting global trade winds.

Only recently has a discussion begun to devise a collective strategy to bring stability to the sector. It began at the Global Aquaculture Alliance’s (GAA) annual GOAL conference last fall, and it continued in March at Seafood Expo North America in Boston, Mass., USA.

“With all this shrimp, what are we going to do to about finding a healthy market for it, so that it becomes a healthy opportunity for everyone?” asked Travis Larkin, president of U.S. shrimp importer Seafood Exchange at the beginning of the GAA’s Annual Shrimp Forum, which returned to SENA conference schedule after an extended absence.

Intended to bring shrimp producers, marketers and investors together to discuss production forecasts and market trends, the Shrimp Forum was well attended. Speakers discussed with the audience the most recent production figures based on annual GOAL survey data, insights from global market leaders and an exclusive production forecast from India, now one of the world’s leading farmed shrimp suppliers and exporters.

Dealing with the current oversupply is mission critical, as Larkin quickly pointed to the fact that global shrimp production is expected to continue growing, to the tune of a 5.7 percent gain from 2017 to 2020.

“In a smaller industry, 5.7 percent might not seem like much, but 5 percent on 5 million metric tons, that is a lot of product,” said Larkin, who then illustrated how sharply global exports shifted from 2012 to 2017. The key dynamic has been China: Larkin noted a dramatic turnaround in the nation’s trade flows (see Figs. 1 and 2). 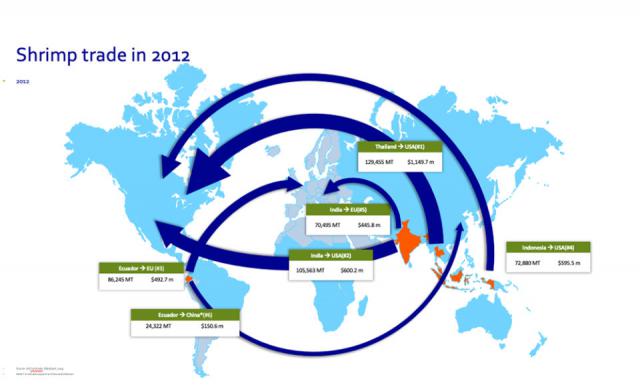 “Look at the shift [of product] from Ecuador going to China, or to Vietnam – it’s no great secret it’s finding its way to China. The question that we’ve had for a few years is, ‘When will China become a net importer of shrimp?’ Well, we’ve gone to that point and way beyond it now,” said Larkin.

While the shrimp market in China is seemingly strong, with China holding on to more of its own production than ever before, demand in other key markets like Europe and the United States is tepid by comparison. Shrimp has managed to retain its title as the most popular seafood in the U.S. market, with 4.4 pounds consumed per capita in 2017, yet there is sufficient reason to worry that the market may become stagnant.

Larkin suggested that a unified marketing strategy for shrimp, which he described as a “pre-competitive effort” that could lift the category in ways that beef, pork, milk and egg producers have done, could drive demand. But he estimated that three-quarters of all U.S. shrimp importers would have to buy in for the program to work. How it would be paid for remains the key question.

George Chamberlain, GAA president, said a voluntary pay-in model has its merits, but is unlikely to get off the ground because of all the “free riders,” those who benefit put don’t pay in to the system. He favors a mandatory program similar to what other animal protein and agriculture sectors like avocados have done. Avocado consumption in the United States increased 300 percent from 2000 to 2015, thanks in large part to collaborative marketing efforts and timely advertising spots.

Bill Dresser, president of Sea Port Products, a seafood importer based in Kirkland, Wash., agreed and said that while there is growing support among shrimp importers for a mandatory pay-in model for promoting shrimp, the program must involve all links in the supply chain, not just importers.

“Whatever conversation we have has to [result in a] comprehensive model that brings in everyone, from producer to processor to importer to distributor. We all have to be involved for it to be successful,” said Dresser, adding that a recent increase in per-capita shrimp consumption in the United States was cause for both celebration and concern.

“[Per-capita shrimp consumption] was 4 pounds forever. It’s now up to 4.4 or maybe even 4.5, which is something we should be really excited about,” he added. “But the only reason it happened is because prices went down. There’s a rule of thumb [for shrimp], that for every percentage increase of supply, if demand is stable, you can expect a corresponding decrease in price. If supply is going to increase, and we don’t have the ability to drive demand [at a corresponding rate], then growth is based on a declining price. That’s not a sustainable working model.”

Dresser said every protein group (beef, pork, chicken, milk) has reached a similar crossroad and each one met its given challenge with a marketing initiative.

A call for action on antibiotics

Iain Shone, development director for GAA, said that antimicrobial resistance (AMR) is becoming one of the “world’s biggest public health challenges” and that shrimp farming has a large role in how aquaculture addresses the issue.

Citing a March 15 CBC report that discovered a handful of frozen shrimp products in Canadian stores tested positive for the presence of antibiotic-resistant bacteria, Shone stressed that farmed shrimp is safe to eat, has an “excellent food safety track record” and that the article failed to put the antibiotics-in-food concerns into proper context. GAA criticized the report as “sensationalized” by singling out farmed shrimp, when the scope of the issue goes beyond any one industry.

“This is a huge threat to our existence on this Earth, some even think more so than climate change. It’s a fact that some antibiotics are no longer working to treat disease because of resistance, in human health and in animal health,” said Shone.

Shone expects the “extremely complex” issue to attract even greater attention as the United Nations considers a global strategy to combat AMR, in conjunction with the World Health Organization (WHO), the World Organisation for Animal Health (OIE) and the Food and Agriculture Organization (FAO) of the United Nations. Aquaculture will be “in the spotlight” when these recommendations are presented to the UN Secretary General, which could happen as soon as next month, said Shone. Those recommendations will likely include calls to improve diagnostics, data collection, best practices and biosecurity measures as a form of prevention.

“There’s a much greater focus on antibiotic use in animal health, and specifically in aquaculture, coming fast at us,” he said.

Certification schemes, like GAA’s Best Aquaculture Practices, have already made changes to their standards to reflect growing AMR concerns. Shone noted that BAP farm standards will no longer allow the most critical category of antibiotics, those deemed important to human health, to be allowed in aquaculture production.

Innovation throughout the production chain

GAA President George Chamberlain feels that shrimp farming is showing signs of improvement at every link in the production chain: hatcheries, feeds and nutrition, farms and processing facilities.

“Genetics is the biggest driver” to growth in shrimp farming, he said, adding that producers have learned a lot from the poultry model, in which genetic improvements in breeding date back to the 1940s. Chicken growth rates have improved 400 percent in that time, Chamberlain said, thanks to selective breeding and genetics.

But salmon, tilapia and shrimp are all poised to outpace poultry: “It’s a remarkable improvement on the range of 10 percent per generation. In the case of shrimp, a generation is less than a year. We’ve asked geneticists, ‘How can it be that these aquaculture species are accelerating so fast?’ And they say [it’s because of] the number of offspring they have, the shortened length of the generation cycle and how recently they’ve come from the wild.”

Chamberlain also explained how shrimp hatcheries in Ecuador have managed to combat disease. While most producers globally have historically used SPF (specific pathogen free) broodstock, which are free of up to 20 known pathogens, Ecuador widely uses SPR (specific pathogen resistant) broodstock, also known as APE, or all pathogen exposed.

Instead of being free of any given pathogen or the most common ones, SPR or APE broodstock are actually “survivors,” or animals that were exposed to disease on farms. This method “has a built-in selection for disease resistance, which is what has driven such tremendous improvement in Ecuador,” said Chamberlain. As a result of this shift, Ecuador has developed shrimp stocks that are resistant to diseases like white spot virus and early mortality syndrome, or EMS, he said.

In feeds, manufacturers are finding solutions to hatcheries’ reliance on live feeds like algae and the brine shrimp artemia, as they are often disease vectors. Chamberlain predicted a “total replacement” of live feeds in hatcheries in the coming years.

Grow-out is another dynamic area for innovation, Chamberlain said. Automatic feeders are making feeds more efficient and less wasteful, and many Asian farms use sumps in the bottom-center of their ponds, which are designed to collect organic matter to be moved to settling tanks away from the pond water. “They’re called shrimp toilets, which isn’t the best marketing,” joked Chamberlain. But it’s one of dozens of examples where innovation is making farming operations more efficient, productive and investable. 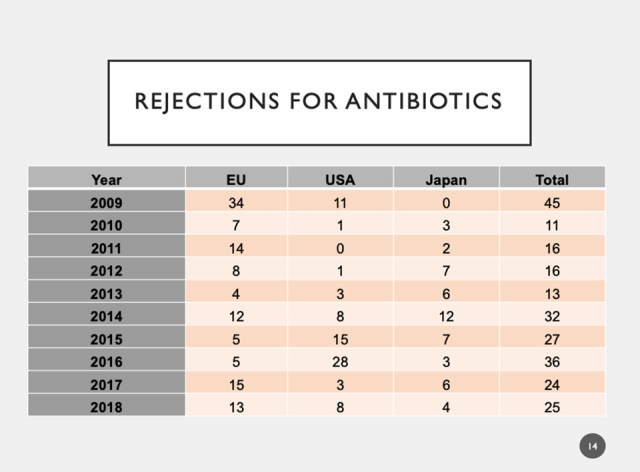 That’s stunning growth, yet there’s ample room for further increases, with only one-quarter of the land available to shrimp aquaculture currently being utilized. And there’s also plenty of processing and cold storage capacity, Sait said, with 3 million MT of freezer space.

With regards to antibiotic residues, Sait said rejections at ports of entry around the world have steeply declined, from 45 in 2009 to 25 last year. “It’s just 0.1 percent [of total volume],” he said. 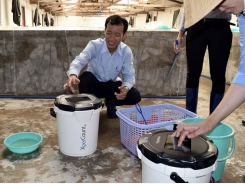 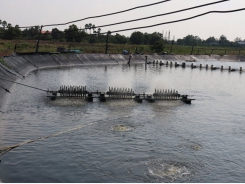 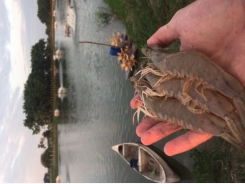 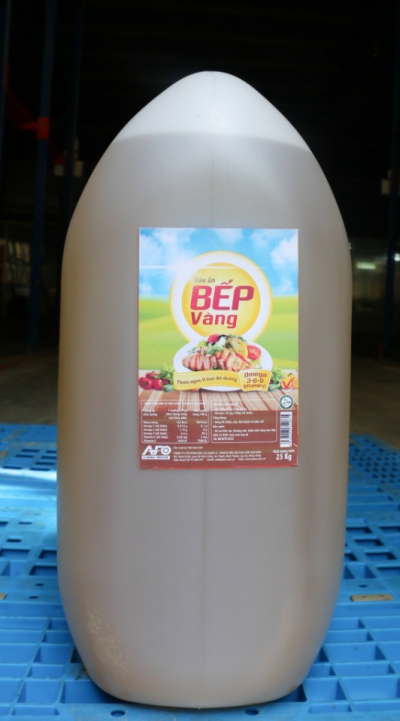 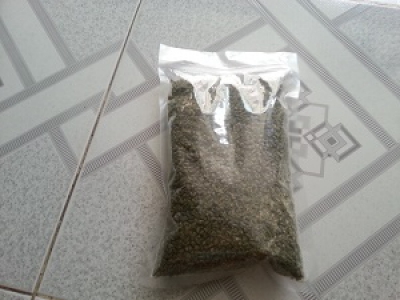