Leafroll virus in vines can be beaten – heres how 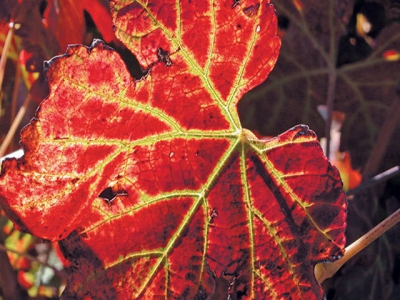 Leafroll virus is a serious threat to South Africa’s viticulture industry: it shortens the lifespan of vineyards and has a negative impact on wine quality.

While it is generally accepted that leafroll virus severely shortens the economic productive lifespan of a vineyard, winemakers up until now have been in two minds over its impact on wine quality.

Research funded by Winetech at Stellenbosch University has, however, confirmed that the disease reduces wine quality.

Lucinda Heyns, technology transfer coordinator for Winetech, said at a recent Vinpro information day held in Stellenbosch that researchers had evaluated the impact of the virus on wine produced from infected and non-infected Chardonnay, Merlot and Cabernet Sauvignon vines.

“There was a significant difference in the physical appearance of the grapes from infected red varieties, with their vines producing smaller and fewer grapes than healthy vines. The colour of the grapes and juice was also lighter,” she said.

Whereas the team had been able to identify the infected red varieties by merely looking at the symptoms, they were unable to do so with the white variety, Chardonnay. For this, they required laboratory tests.

Chemical analysis revealed that wine made from leafroll-infected vines generally had lower sugar, lower pH, lower alcohol, higher acids, less anthocyanins and colour density, and lower tannins and phenolic compounds than wine made from healthy vines in the same vineyards.

Wines were presented to a panel of winemakers in a blind-tasting format, and the results were analysed and interpreted by the Institute for Grape and Wine Sciences’ sensory platform. Prominent differences in the taste profiles were described during the tasting, with the term ‘unbalanced’ being used often for wines made from infected vines, according to Heyns.

The effect of the timing of harvesting was evaluated by harvesting some of the Cabernet Sauvignon vines two weeks later than the rest of the vines. This seemed to intensify the negative properties associated with wine made from infected vines.

“Many producers with whom we’ve shared the results so far have decided to treat the juice from infected and non-infected vines separately. In this way, the different styles and quality of wines produced can be used for different products,” says Heyns.

Spread of infection in vineyard

According to Professor Gerhard Pietersen of Stellenbosch University, leafroll virus is the primary reason so many South African vineyards are replaced early, at 20 to 25 years of age.

“The problem with leafroll virus is that the number of infected vines in a vineyard will almost double with each year that goes by. It’s one of the main reasons why the majority of vineyards in South Africa are not kept long,” he explains.

The virus reduces production volume and causes uneven ripening. Symptoms are usually mild and difficult to spot on white cultivars, and for this reason most management practices are aimed at controlling the disease on red varieties.

In the latter, the leaves turn red while the veins remain green, whereas in some white cultivars the leaf area between the veins turns yellow. The leaves of some varieties might also curl downward.

The virus may be introduced into a block via infected cuttings or mealybugs.

To prevent the disease from taking hold, all plant material and volunteer vines should be removed from a block before new vineyards are planted there.

“People often ask if they should fallow the land and, if so, for how long. But the key here is to successfully remove plant material. If done properly, it might not be necessary for the block to be fallowed, although fallowing is a good management practice to break other disease cycles,” says Pietersen.

Leafroll virus tends to be latent in young vines, so symptoms are seldom visible on infected vines during the first year after planting, unless the vines have been subjected to stress.

“Wind damage to infected young vines might cause ringbark, which can look similar to leafroll,” he explains.

Risks are also significantly reduced when farmers buy three-star status cuttings. “These cuttings are cultivated in virus-free areas, so will definitely be free from the disease.”

If cuttings are sourced from areas that carry virus risks, the best course of action is to treat the vines with a systemic mealybug insecticide.

Pietersen stresses that this must be done at the earliest convenient time after planting.

“The key here is to use the right product, as different products are registered for different times of the year. Ask a chemical consultant for advice and make sure you use the product according to instructions.”

He adds that during the early phases of the vineyard, for each year that vines are removed, the lifespan of the vineyard is extended by a year or two.

Mealybug most commonly transmits the disease to the vines closest to the infected one, and this leads to a large number of new infections.

Removing the initially infected plants is key to preventing this.

However, mealybugs may under certain conditions transmit leafroll virus over kilometres by travelling via farm equipment, clothing and the wind. These insects should therefore be kept in check to prevent the virus from spreading to new vineyards.

“Mealybug management should be a priority for everybody in the production region as this is the most effective means of controlling the disease. But the disease can be controlled in individual vineyards if mealybug control is practised in the immediate vicinity of the new vineyard,” says Pietersen.

To prevent the spread of the disease, it therefore makes sense to plan vineyard activities to start with young and virus-free blocks and move gradually to older blocks. This is particularly the case if equipment and clothing are not sanitised in between these activities.

The mealybug population can be kept low with the aid of systemic insecticides. This, however, kills all insects that feed directly on the vine.

Alternatively, parasitoids or predatory insects can be used as part of an integrated pest management plan. A wide variety of these insects might already exist on the farm, but should most probably be augmented with commercial species for the best results.

The main commercial species used are: Cryptolaemus montrouzieri, a ladybird that feeds on all stages of the mealybug, including its eggs, and lays eggs in the female mealybug; and Coccidoxenoides perminutus and Anagyrus spp., wasp species that lay their eggs in mealybugs.

Heyns says that she knows of farmers who have achieved excellent results by using beneficial insects to control mealybug populations.

“These insects should be released early in the season, before the mealybug population proliferates, otherwise the beneficial insects don’t stand a chance. The companies that supply the insects have good management guidelines, which help to unlock the full potential of these insects. Farmers should also take care not to use chemicals that might be harmful to these beneficial organisms.”

Pheromone traps should be used to monitor mealybug populations, whether using chemical control, natural enemies or a combination of these methods.

If a mealybug population is under control, the farmer can afford to wait and see if a suspicious vine is really infected, Pietersen explains.

If there is more than 20% infection, the best solution is to manage the vineyard until

it no longer makes economic sense to keep it, and to control mealybugs and not necessarily the disease. 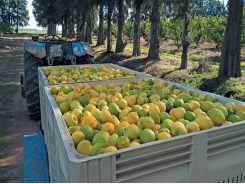 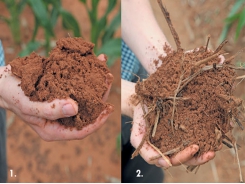 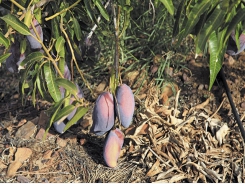