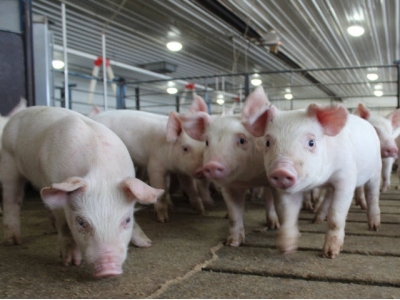 An important way to improve piglet intestinal health is with nutrition. In general, pig health is closely related to their nutritional status.

Nutritional deficiencies can result in intoxications, hypogalcatia, leg weakness, gastric ulcers, oedema disease and diarrhea. In pigs, the most important nutrition related disease is post-weaning diarrhea and oedema caused by pathogenic E. coli bacteria. Improving health with nutrition is becoming increasingly important, as the use of antibiotics is becoming more restricted. For example, in the EU, antibacterial growth promoters were banned in 2006.

The surface of a pig’s intestine is comparable to a tennis court. It is formed by villi and microvilli, enabling the pig to digest and absorb valuable nutrients from its feed, see Figure 1 . However, this enormous surface can also be used by pathogenic microorganisms to adhere to and enter the pig’s body. The intestine has the very challenging task to absorb nutrients, but at the same time keep bacteria, viruses and toxins at bay. To keep pathogens out, the intestine is equipped with the largest immunological organ of the whole body: the Gut Associated Lymphoid Tissue.

Certain nutrients such as glutamine, butyric acid and propionic acid are used as an energy source by the intestinal cells. Adding them to the feed can help keep the intestine in optimal shape. Also, antioxidants like vitamin E protect intestinal cells against oxidative damage caused by immunological reactions against pathogens.

Several alternatives for antibiotics have been developed in the past decades. Antibacterial growth promoters suppress bacteria in the intestinal tract leaving more nutrients for the pigs to grow. In fact, the alternatives for antibiotics do the same. Worldwide organic acids are used on a large scale because of their antibacterial properties. These acids such as formic, lactic, propionic, benzoic and butyric acid directly inhibit or kill undesired bacteria.

Essential oils are natural compounds a plant produces to protect itself against bacterial infections. They can be successfully applied as an antibacterial additive in feed. Essential oils penetrate the bacterial cell wall and prevent flaggelae from being formed, see Figure 2 . The effectiveness of organic acids can be boosted by combining them with essential oils. In a challenge trial, weaned piglets were infected with E. coli. After infection, the faecal excretion of E. coli was measured daily. It was found that formic-lactic acid inhibited the E. coli, but combining these acids with an essential oil killed off the E. coli.

Bacteria need these receptors to adhere. The binding sites are located on the fimbriae of bacteria and are very specific, see Figure 3 .

Specific antibodies that are present in spray-dried plasma can block them see Figure 4 . Certain mannan oligosaccharides also can block bacterial adhesion and colonization in a similar way.

Too much crude protein in feed creates undigested protein that reaches the large intestine where it is fermented by bacteria. These bacteria produce biogenic amines from the protein, and ammonia-like compounds irritate the intestinal wall causing diarrhea. By lowering a feed’s crude protein level diarrhea can be prevented.

At first sight, it seems appropriate to maximize the immune response of the intestine. This can be done by several immunostimulants like peptidoglycans and zinc. However, triggering the immune system requires quite some energy and amino acids (to produce immune cells and immunoglobulin), and in the worst-case scenario it could lead to undesired inflammation. Also, cytokines can be released leading to a drop in feed intake. In some cases, it may be better to temper the immune system rather than to stimulate it.

The immune system can be tempered by lowering the contact of pathogens to the intestinal wall, and adding blood plasma to feed. The antibodies in the blood plasma bind to the bacteria and viruses, preventing them from coming into contact with the intestine. In addition, omega-3 fatty acids from fish oil reduce inflammatory processes.

Nutrigenomics is the study of molecular relationships between nutrition and the response of genes. It determines the mechanisms behind the effects that nutrients have on health and performance. The goal of nutrigenomics is to make the beneficial genes work harder and better. For example, it has been found that in case of the intake of colostrum, sialidase mRNA is ‘up regulated.’ Sialidase makes holes in the bacterial cell wall. This may be an explanation of the positive effects of colostrum on health.

The challenge is to find out what other compounds have the same effect. Butyric and propionic acid are naturally produced by intestinal flora and play a key role in triggering beneficial genes or suppressing harmful genes. These acids reduce the invasiveness of Salmonella in poultry, and can stimulate the intestine to produce antibacterial peptides (defensins).

The intestine plays a key role in piglet health. Because antibiotics are more and more restricted, alternative concepts to suppress intestinal pathogens are needed. Measures such as increasing feed intake after weaning and lowering NSP, NDO and crude protein all have a positive influence on intestinal health. Main additives that have proved their effectiveness are organic acids, MCFA’s, essential oils, blood plasma and vitamin E.

About Author: Dr. Albert van Dijk is registered as a “specialist, veterinary nutrition” at the Royal Netherlands Veterinary Association and has been closely involved in developing new products and solutions for swine. He is also group manager swine at Provimi in the Netherlands. He can be reached at avandijk@nl.provimi.com. 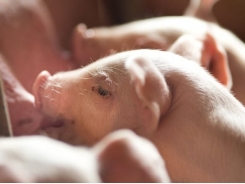 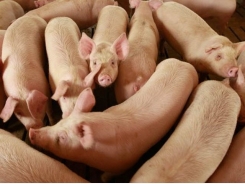 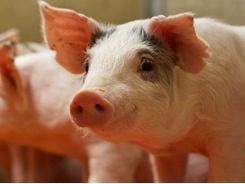 Evaluating the importance of antioxidants in feed