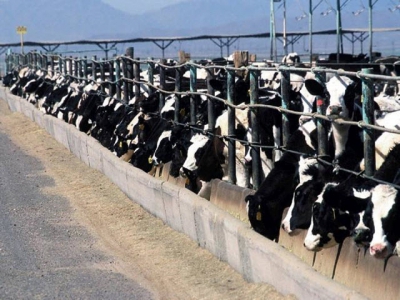 The immune system is a biological defense system comprised of different structures, cell types and processes that act to protect the host animal from pathogens. Pathogens include micro-organisms, viruses and parasites. As such, the immune cells must be able to differentiate between healthy host tissues and cells and those of a pathogen or tumor.

The immune system is a complex, tiered arrangement that facilitates detection. The initial line of defence is usually physical in the form of a barrier, such as the epithelium. Cuts or abrasions to the skin can allow entry of pathogens into the body that subsequently stimulate the next step in the defense process — the innate immune response. This response causes inflammation and is immediate but non-specific, meaning that it reacts in the same way, no matter what the pathogen is.

A second aspect of the immune system is the adaptive or acquired immune response. This is more complex than the innate system as it involves recognition of specific, individual pathogens. Antibodies are produced as part of this response and activation of the adaptive immune response forms the basis of vaccination. This system also poses "memory" whereby memory cells from a previous infection remain in circulation and if the same pathogen is encountered for a second time, the response is more rapid and of greater magnitude.

The failure of any stage of defense leaves the animal at greater risk of succumbing to infection and/or disease. Effective host defense requires that innate and acquired protective factors be coordinated to provide optimal resistance to disease.

It is well established that immune function during the periparturient period is compromised and research has looked at targeting factors that contribute to this immunosuppression, often with emphasis on mastitis. Numerous factors influence immune function, including genetics, hormones, oxidative stress and nutrition.

Oxidative stress occurs when the balance between oxidants, such as reactive oxygen species (ROS), and the body’s antioxidant system shifts toward the former. Abundance of ROS, including hydroxyl radicals and peroxides, increases when there is an increased demand for oxygen. These ROS are potent mediators of cell and tissue damage, putting additional strain on the immune system.

The transition period represents the greatest physiological stress to a dairy cow, which also has a negative impact on the body’s ability to fight disease. Physiological stress is the adaptation of the body’s functions to try to cope with the current situation e.g. calving, and deficiencies and excesses of various nutrients can result in impaired immune function, so careful attention must be paid to transition cow diets.

Energy balance is a key attribute to successful diary production, and negative energy balance (NEB) is an omnipresent issue during the immediate post-partum period. Animals with an NEB tend to have elevated levels of circulating non-esterified fatty acids (NEFA). These compounds are associated with an increase in inflammatory conditions, though the exact mechanism is unclear. Negative energy balance results in mobilization of adipose tissue to provide additional energy as nearly all the glucose available is directed to the mammary gland. This creates a shift in the profile of circulating fatty acids (FA), which has knock-on effects for compounds generated from these FA. One study highlights the reduction in cell membrane concentrations of the polyunsaturated FA (PUFA), eicosapentaenoic acid (EPA) and docosahexaenoic acid (DHA). Additionally, ketones produced during NEB have an inhibitory effect on the immune system, rendering the cow more susceptible to disease challenges.

Polyunsaturated fatty acids are also the precursors for many compounds, such as eicosanoids, prostaglandins, leukotrienes and thromboxanes, which are all involved in the immune response. Eicosanoids show varying degrees of inflammatory stimulation and thus alterations in FA profiles due to NEB will influence the inflammatory response. So, promoting a positive, or less negative, energy balance is vital during the transition period. Dietary inclusion of the n-3 series PUFA has shown beneficial effects with regards to inflammation and lymphocyte proliferation.

This requires a healthy and efficient rumen, which can be encouraged by feeding a balanced ration using quality ingredients. As fetus size increases, dry matter intake (DMI) decreases meaning adjustments in energy density of the ration may be required. Fat is often used to increase energy density but it must not be at the expense of ration balance. Adequate fermentable carbohydrate is still required for microbes to utilize rumen soluble protein and drive microbial protein production. Additionally, diets with excessive protein levels will generate an energy cost to the cow, energy that could have been partitioned elsewhere. Feed additives, such as live yeast, prebiotics and combinations of multiple additives have been used to try to improve rumen function and/or cow health.

For example, a 2014 study noted an increase in the expression of two immune markers related to white blood cell function following dietary inclusion of a combination of yeast, clay and mineral oil.

Oxidative stress has also been cited as a negative influence on immune function. Aerobic biological processes require oxygen and, thus, generate ROS. These damaging entities are kept in check by a cascade of antioxidant defense processes. The production of ROS is elevated in times of physiological stress, such as transition, due to increased oxygen utilization, as well as lipid peroxidation. The risk of oxidative stress is also increased during the immune response as the process of phagocytosis generates free radicals. Hence, ensuring rations support antioxidant status during the transition period is critical.

There has been much research on antioxidants in dairy cattle, including vitamins E, A and D, as well as selenium (Se). Vitamin E is a membrane-bound antioxidant that works together with Se to scavenge free radicals and peroxides. Vitamin E (Toc – OH) acts as a free radical (LOO·) scavenger, i.e. breaks the oxidation chain:

The reaction results in the production of the phenoxyl radical, Toc - O·, which is more stable and less reactive compared with the lipid radical, LOO· and is eventually reduced back to Vitamin E. As well as an antioxidant, Vitamin E also has specific effects on macrophages. Vitamin E requirements are related to the complex inter-relationship between Vitamin E, Se deficiency and quantities of UFA in the diet. Indeed, many of the studies showing supplementation of vitamin E reduces the incidence of mastitis were carried out in Se-deficient herds.

Se-containing enzymes also scavenge ROS and have a vitamin E-sparing effect. Levels of selenoenzymes are known to decrease during the periparturient period but rapidly increase again in early lactation. This decrease may partly contribute to the immunosuppression seen in periparturient cows. Glutathione peroxidase is a selenium-containing enzyme that oxidizes glutathione in the presence of peroxides where GSH = reduced glutathione and GSSG = oxidized glutathione:

Selenium inadequacy is also linked with adverse immune function effects, such as impaired antibody production and reduced phagocytotic capacity. Adequate selenium status has a positive effect on the animal’s ability to resist infection, as well as fertility parameters. One of the ways selenium exerts its effects on the immune system is via Interleukin 2 (IL-2), which is involved in T cell proliferation and differentiation. Interleukin 2 (IL-2) is directly related to selenium levels, hence, poor selenium status is reflected in an inability to mount a good T-cell response whether to a pathogen itself or to a vaccine.

Optimizing Se status in cows is essential for supporting immune function and not only amount but form of Se supplied is important. It is well-established that organic forms of minerals generally have higher bioavailability and retention in the body compared with their inorganic counterparts. This retention in body tissues allows the animal to build a reserve of the mineral to use in times of increased physiological stress, e.g. transition. As Se cannot be chelated, selenium-enriched yeast (Se-yeast) is often used to deliver Se in an organic form.

Positive effects have been noted with feeding an organic form of other minerals, such as zinc and copper. Zinc deficiency can result in immune abnormalities and subsequent greater vulnerability to infections. A decrease in lymphocyte proliferation, as well as reduced phagocytotic activity, has been demonstrated following zinc deficiency. Interestingly, disruption of immune function has also been noted following an excess of zinc, which highlights the possible role of zinc in immune regulation. Zinc is also crucial for maintaining the integrity of the primary barrier, the skin. Cells involved in the innate response require zinc for normal function and development.

Essentially, immune function is critical to dairy cow performance and attention should be paid to promoting it throughout the dry and transition period. Nutrition plays a crucial role in dairy cow health, not least through direct effects on the immune system. Feeding to enhance immunity is vital and should focus on maintaining rumen function, as well as providing optimal mineral nutrition. There are also feed ingredients and additives that can be utilized to support immune function. 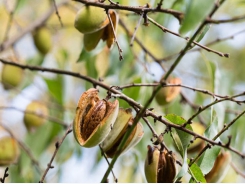 Almond industry feed targeted research looks to dairy and beyond 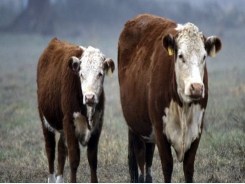 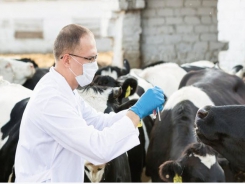