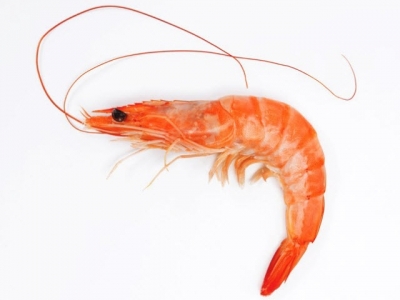 An international team of researchers at several institutions in Mexico and the State Technical University of Quevedo in Ecuador examined the influence that the dietary ratio of protein to energy had on several production factors for juvenile river prawn.

“This work aims to determine the optimal protein to energy ratio and to evaluate the effect of dietary protein and lipid levels on growth performance, feed utilization, body composition, digestive enzyme activities, and hepatopancreatic cells morphology,”​ said the researchers.

The team found that the ratio of protein to energy (P/E) did influence the growth rate and digestive ability of the prawn.. The optimal ratio of dietary protein to energy for growth performance and body composition was a diet with 350 g kg-1 protein and 100 g kg-1 lipid level and a P/E of 18 mg CP kJ-1.

“Furthermore, sparing dietary protein with dietary lipid was achieved with the diet containing 350 g kg− 1 protein and 100 g kg− 1 lipid, and this could be set as recommendable for further studies on feed formulation for the cauque river prawn M. americanum."​

Why protein and energy ratios?​

Aquaculture production has had an annual increase in yields of about 6.7%, with several species being raised in large quantity and others presenting potential, noted the authros.

Macrobrachium prawns are a species that could offer promise for commercial production.

One species in the genus is commonly cultured and raised in Asia, they said. However, a different species that could have potential is the cauque river prawn Macrobrachium americanum, which is found in rivers and streams along the Pacific coast from Mexico through Peru.

There is a market for the prawn variety, but overfishing is reducing the wild population, they said. Research on production of the species is limited.

“Research programs on similar species are required, like those performed with the M. amazonicum in Brazil, for which culture technology is being developed with promising results,”​ they wrote. “Among the basic studies, those on food and nutrient digestion are needed, because the requirements and digestive efficiency in crustaceans can be different among species depending on their feeding habits and habitat.”​

The prawn is omnivorous and has a wide-ranging diet, said the researchers. However, that fluidity means the protein and lipid requirements for production are hard to gauge.

“To formulate a least-cost, balanced diet, the minimum required protein level must be established,” ​they added.

Previous studies looking at related species could act as a starting point as only preliminary work has been done, they said. The aspects that need to be examined include the effectiveness of the protein reduction provided by carbohydrates and lipids – a factor of the P/E ratio in the diet.

“It is stated that the P/E ratio is a rational method for determining the optimum protein requirement of aquatic animals rather than using only crude protein,”​ they said. “The reason is that if dietary lipid and carbohydrate are in suitable amounts, they could substitute protein as an energy source and, then, reduce its utilization as energy, a concept known as protein sparing effect.”​

A thorough understanding of the diets would be incomplete if aspects of cytology, hematology and digestion are not examined, said the researchers. “The midgut regulates movement of food into the digestive gland and it is there where enzymatic digestion, food absorption, and intracellular digestion take place by the specialized B (Blasenzellen), F (Fibrillar), E (Embryonic), and R (Restzellen) cells, thus, a revision of the morphology and function of these cells helps to achieve a complete understanding on this issue,”​ they added.

In the feeding trials one of six diets were given to 270 juvenile prawns for a period of 60 days.

Digestive enzyme activity was measured at the end of the feeding trial as were the amounts of triglycerides, cholesterol and glucose in the hemolymph.

Survival rate was similar among all diets, the researchers said. A difference in final weight, weight gain and SGR was found.

“The juvenile fed the P/E ratio of 18 and 21 exhibited statistically significant better FCR and HSI than those fed other diets,”​ they said. “With respect to FL [final length] and LG [length gain], the highest values were observed in prawns fed the diets containing the 18, 19, and 21 P/E ratios.”​

Total protease activity grew when dietary protein was increased at each lipid level, while total cholesterol and glucose amounts were altered by different P/E ratios and lipid amounts, they said. “These results, using the principal component analysis (PCA) with the covariance matrix, suggest that the diet containing 350 g kg− 1 protein level and 100 g kg− 1 lipid level with P/E of 18 mg CP kJ− 1 is optimal for cauque river prawn juveniles,”​ they added. 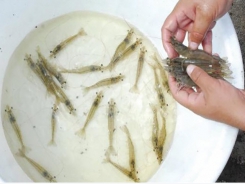 A study of Zoea-2 Syndrome in hatcheries in India, part 1 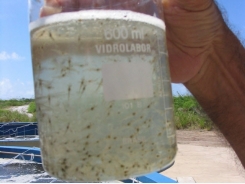 A study of Zoea-2 Syndrome in hatcheries in India, part 2 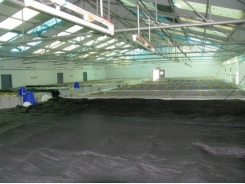 A study of Zoea-2 Syndrome in hatcheries in…